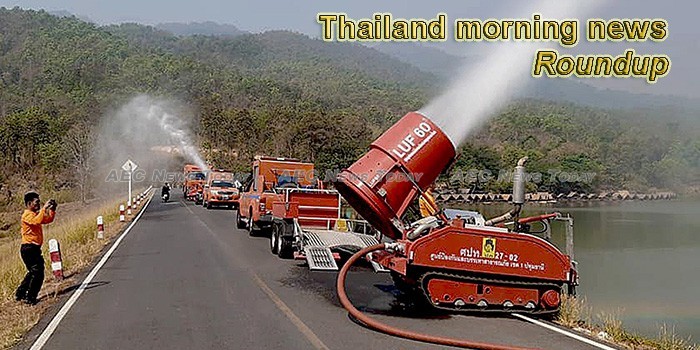 Phuket faces water shortage which may become critical in May if there are no rains
Thailand’s popular tourist destination of Phuket is now experiencing water shortage, with water in the province’s three reservoirs just enough for the production of tap water until May and the…
— Thai PBS News

Confidence index edges down in March
Business sentiment fell again in March after recovering in February, with the business sector fretting over the country’s unclear political outlook.
— Bangkok Post

EC Has Until Thursday to Recommend Election Nullification: Ombudsman
The Office of the Ombudsman said Tuesday the Election Commission has until Thursday to clarify whether there exists grounds to nullify the March 24 election results.
— Khaosod English

Thailand’s royal astrologer cast King Maha Vajiralongkorn’s horoscope on Tuesday in an important ritual to prepare for his elaborate coronation ceremonies next week.
Saffron-clad Buddhist monks chanted as the horoscope for the king’s reign was cast on a golden plaque.
— Reuters

Thailand-Japan join hands on PM 2.5 dust reduction
Thailand and Japan have joined hands on air quality management and the reduction of fine PM 2.5 particulate matter in traffic congested areas, starting with air pollution surveys in Bangkok to find the sources of pollution by the end of this year, in order to create solutions to resolve this issue.
— NNT

Govt Threatens Legal Action Over ‘Crazy Rich Prawit’ Article
The government has said it is weighing up potential charges over a “fake” article identifying the deputy junta chairman as one of 45 real-life “crazy rich Asians.”
— Khaosod English

Developers to provide jam impacts
Land developers will be required to conduct Traffic Impact Assessments (TIAs) to try and relieve traffic congestion caused by their projects when TIA criteria, expected to be finalised this July, come into effect.
— Bangkok Post

Authorities backtrack on move to tax interest from bank deposits
The Revenue Department has withdrawn a much-criticized demand for bank depositors to provide written consent to allow their banks to deduct tax on interest earned on deposits.
— Thai PBS News

Coral in Trang extensively damaged after tourist influx over Songkran
Tourist during Songkran have caused extensive damage to coral in the national park area of Trang, south of Thailand. Matichon Online reports that the damage was caused by the tourist numbers overwhelming the area during the week-long Songkran break.
— The Thaiger

Aviation Officials to Probe Near Collision on Krabi Runway
Aviation authorities promised Tuesday to look into a near collision between two planes on the runway in Krabi province.
— Khaosod English

Power outage in Chalong announced
The Provincial Electricity Authority (PEA) Chalong branch has announced that the electricity supply will be temporarily shut off in parts of Chalong on Wednesday (Apr 24) as work is carried out on high voltage power cables.
— The Phuket News

Summer thunderstorms cause damage in many areas
Thunderstorms have been reported in many areas of northern Thailand, causing damage to a number of houses, especially in Hang Dong district of Chiang Mai where some 1,800 houses were damaged by strong winds over the weekend.
— Pattaya Mail

Amnesty for marijuana possession campaign
Public relations campaigns have been launched to inform the general public that marijuana can only be used for medical purposes. A committee has been set up to consider a request for each household to be allowed to grow no more than six marijuana plants.
— NNT

Phuket residents flame Governor over water shortages
Just hours after the Phuket Governor this morning (Apr 23) held a press conference to specifically explain that Phuket is not suffering a drought crisis, about 80 residents from Rassada staged a protest in front of Phuket Provincial Hall over the lack of water supply to their community.
— The Phuket News

Phuket’s ‘seastead’ is now a sad ‘homestead’ back on shore – VIDEO
The Phuket seastead removal operation was a success yesterday, according to the Royal Thai Navy.
— The Thaiger