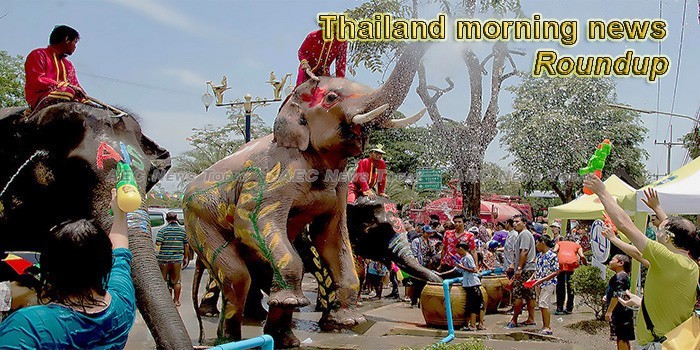 New fires in the North likely to be arson – Army
Some 1,000 combined professional and volunteer firefighters are battling a major forest fire in the mountainous area overlapping Chiang Mai’s Muang and Mae Chan districts.
— The Thaiger

Sick Songkran festival goers can immediately claim for Social Security coverage
A variety of summertime diseases, such as diarrhea, food poisoning, typhoid, cholera and rabies strike those who are celebrating the Songkran festival in the provinces.
— NNT

Unity govt ‘same as a dictatorship,’ parties say
Political parties have poured cold water on the idea of setting up a national unity government as a way out of a potential deadlock following the March 24 election.
— Bangkok Post (annoying popups)

Access to capital hampers smart city creation in the region
Access to capital is the most critical barrier for developing smart cities in Asean nations, including Thailand, as countries struggle to find alternative sources of investment for infrastructure projects with high upfront costs.
— Bangkok Post

Thailand tilts towards Chinese-style internet controls
A swathe of the world is adopting China’s vision for a tightly controlled internet over the unfettered American approach, a stunning ideological coup for Beijing that would have been unthinkable less than a decade ago.
— Bangkok Post

Being China’s neighbor and US ally, Thailand needs to strike a balance between the two
The Blue Book of Thailand – Annual Report on Research on Thailand (2018) was released at a conference in Beijing on Saturday. What is the significance of Thailand to China?
— Global Times

Khao San Road still a popular Songkran destination
Water splashing activities for Songkran holidays at Khao San Road in Bangkok are still popular with tourists, despite no stages being set up like in previous years, with the police urging all to wear appropriate clothes and play water games with moderation.
— Pattaya Mail

Cross-border trade, tourism promoted
Cross-border trade and tourism are being promoted at Baan Khao Din border checkpoint in Sa Kaeo province which has been upgraded to permanent status.
— NNT

Summer storms damage houses in Korat, Kalasin
Nakhon Ratchasima and Kalasin have been hit hard by summer storms, which are forecast to unleash rains and strong winds in some parts of the country until Wednesday.
— Bangkok Post

4 Thong Lor cops fingerprinted over missing guns
Four police officers attached to Thong Lor police station gave DNA and fingerprint samples as part of the investigation into 11 guns found missing from the station — in what a senior officer believed was an inside job.
— Bangkok Post

Treasury nears elderly unit rates
The Treasury Department looks set to fix residential unit prices of its initial complex for the elderly, its chief says, in an attempt to resume the project after a delay the past few years.
— Bangkok Post

Transport Co prepares extra buses
The Transport Company Limited has announced that it has prepared 2,000 extra intercity bus services a day, as more people are expected to use public transport during the Songkran festival.
— NNT

Thailand’s time to shine
The Thai gems and jewellery industry is expecting growth this year despite an international economic slowdown.
— Jeweller

Chiang Mai Songkran bustling with tourists
Celebrations of Songkran in Chiang Mai this year have seen popular areas crowded with Thai and international visitors coming out to splash water along the city moat and at Tha Phae gate.
— NNT

Songkran revellers forming human wave
Songkran celebrations in Khon Kaen province have been lively, as Thai and foreign revellers are creating the famous “human wave” in an attempt to break the Guinness world records.
— NNT

Sฺeafaring dog Boonrod brought ashore in Songkhla
A stranded dog rescued from the Gulf of Thailand off Songkhla was brought ashore on Monday morning, and seemed relieved to be back on dry land.
— Bangkok Post

This morning’s Thailand Morning News Roundup is shortened due to the Songkran celebrations. We wish all of our Thai readers a safe, healthy, and prosperous New Year.

Thailand Morning News For May 12