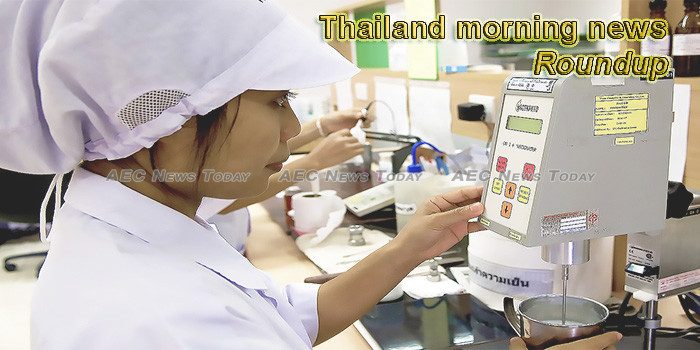 Mall or park? In crowded Bangkok, ‘last’ open space stirs debate
The fate of a large green space in the middle of one of the world’s most built-up cities is pitting communities and conservationists against developers and cash-strapped authorities in a battle that is increasingly common in Asia.
— Reuters

Plea to use pristine forests rejected
ENVIRONMENT Minister General Surasak Kanchanarat yesterday dismissed fresh calls from some forest community representatives for the utilisation of pristine forests in the latest forestland survey and demarcation, arguing that possible changes in the modest way of living of forest dwellers could affect the forest ecosystem.
— The Nation (very annoying popups)

Chinese investors are spending billions on Thai property despite a turbulent political scene
Chinese investors have continued pouring their money into Thailand’s property sector even as the kingdom barrels toward an uncertain national election.
— CNBC

Stern action pledged as people defy burn ban
Officials are adopting a mixed approach to help deal with the toxic haze that has shrouded parts of the province, as local residents continue to ignore the ban on the outdoor burning of waste.
— Bangkok Post

Election Commission Meets to Discuss Disbanding Pro-Thaksin Party
BANGKOK — The fate of a political party allied to former leader Thaksin Shinawatra hangs in the balance as officials were meeting Monday to decide whether the party should be disbanded.
— Khaosod English

Smog set to ease, but summer brings water shortage fears
WINTER in Thailand will be over next week, the Meteorological Department announced yesterday. Even though the smog problem is expected to improve nationwide once winter ends, the arrival of summer brings along a new problem – water shortage.
— The Nation (very annoying popups)

Thailand Faces Escalating Political Risk Ahead of General Election
Thailand’s political divisions are erupting again with just over a month to go to the first general election since a coup almost five years ago. Margo Towie reports on “Bloomberg Markets: Asia.”
— Bloomberg (video)

Renewables to eat up 21% of Thailand’s energy mix by 2028
Strong government support is pushing reliance away from natural gas-fired power.
— Singapore Business Review

Farmer aid scheme topped up with B5bn
Another 5 billion baht has been added to finance the rice harvest and quality improvement scheme for farmers in the 2018-19 season.
— Bangkok Post

Phrae worst off as haze covers North, Northeast
Air pollution is threatening public health in provinces in the North and Northeast, with Phrae the worst affected on Monday.
— The Nation (very annoying popups)

Lampang battling fires, harmful dust
Forest fires that have been burning around Doi Phra Baht in Muang Lampang since Sunday night are contributing to the dense haze clinging to the province.
— The Nation (very annoying popups)

Air pollution rise in northern Thailand attributed to 149 controlled forest fires
The Nation Concern grows as the air pollution problem in the North and North-east regions of Thailand threatens to affect the health of the public.
— The Thaiger

Smog set to ease, but summer brings water shortage fears
WINTER in Thailand will be over next week, the Meteorological Department announced yesterday. Even though the smog problem is expected to improve nationwide once winter ends, the arrival of summer brings along a new problem – water shortage.
— The Nation (very annoying popups)

Time bomb found in Poipet casino, herds of gamblers run back over Thai border (VIDEO)
A bomb was reportedly discovered last night at the Golden Crown Casino in Cambodia’s Popiet City — right across the border — which sent herds of spooked Thai gamblers running back to the land of smiles.
— Coconuts (paywall)

Ministry using ‘Quality of Love’ QR Code from Feb 14 to give health advice to couples planning a family
The Public Health Ministry will provide 10 key pieces of information for quality family creation via the Quality of Love: Phro Rak Jeung Yakhai Roo (We love you, we want you to know) QR Code, from Valentine’s Day on Thursday on wards.
— The Nation (very annoying popups)

Thanathorn pledges more cash for all
The Future Forward Party on Sunday boasted its welfare state policy will entitle all members of the public to more than twice the amount of state welfare that low-income earners currently receive.
— Bangkok Post

Academics push for a welfare state
The country should embrace a welfare state which can be made possible by having a secure source of financing and tax reform, a forum was told.
— Bangkok Post

Rail to boost Lao, Thai trade nomies
THE frequency of Lao and Thai people visiting each other’s country will increase, and so will the growth of trade and cooperation in product development.
— Phnom Penh Post

Transit, EEC projects buoy developers
Listed property companies plan to invest more than Bt100 billion in land purchases this year for the development of condominiums and low-rise residential projects in Bangkok and the provinces.
— The Nation (very annoying pop-ups)

Gay couples to ‘live more freely’ with Thai civil unions
Luke Cassady-Dorion believed marriage was for “boring” straight people until he met the man he wanted to spend the rest of his life with – Tae. But Thailand, where they live, does not permit same-sex marriage.
— Khmer Times

Police Seek Perpetrators of Fake Junta Order Removing Army Chief
Police were looking Monday morning for whoever was behind a forged Royal Gazette announcement that Army Chief Gen. Apirat Kongsompong and other armed forces leaders had been removed by the junta leader.
— Khaosod English

Schools to drop 3 allowances for enrolment
MOST STATE schools will drop three special conditions for admission as part of an effort to end corruption.
— The Nation (very annoying popups)

A new round of Southern peace talks gives hope but the Junta is stalling during the election campaign
Peace talks to end the long-running conflict in Thailand’s southernmost provinces hit a stumbling block last week when Thailand’s new peace negotiator failed to attend a scheduled meeting.
— The Thaiger

Dusit D2 Nairobi to reopen in June following terrorist attack
Following the attack on its premises last month, dusit D2 Nairobi has announced it will reopen in June and resume its function as a major business, leisure and social hub with new dining concepts and an enhanced design.
— The Nation (very annoying popups)

Boom Boom on the border
The attractions of Thailand’s southern border town usually become apparent after sunset On one side of the Thai/Malaysian border is Sungai Golok, on the Malaysian side it’s the town of Rantau Panjang.
— The Thaiger