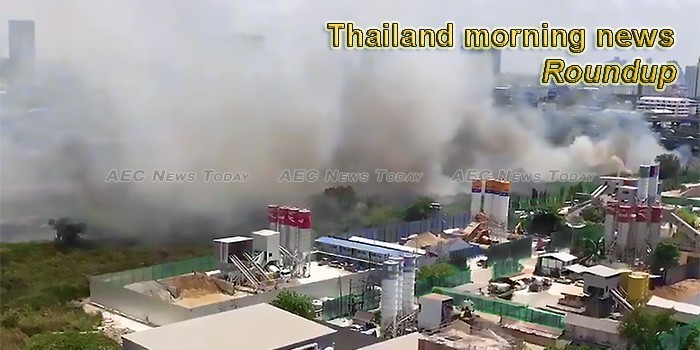 Forest fire causes smog in Phayao
Phayao province is blanketed with smog caused by forest fires, as villagers have to wear masks to protect themselves from air pollution.
— NNT

Provinces battling water scarcity
Various provinces are coming up with ways to mitigate drought as water trucks are being deployed to non-irrigated communities.
— NBT World (video)

Thai king strips fugitive ex-PM Thaksin of royal decorations
Thailand’s king has stripped fugitive former Prime Minister Thaksin Shinawatra of his royal decorations, citing his 2008 flight to escape serving a two-year prison term on a conflict of interest conviction and other legal cases against him.
— AP

PM calls for unity among Thais
The Prime Minister has sent a message to political parties and all Thai citizens, reminding them that the purpose of forming a coalition government is to unite together to do good deeds for the Kingdom and its people while preventing ill-intentioned individuals from doing harm.
— NBT World (video)

EC: No tampering with poll results
The Election Commission of Thailand (EC) said it did not tamper with poll results, confirming that Thursday’s announcement of vote count did not change constituency election outcomes.
–NNT

Chiang Mai to suffer haze and smoke problems until at least May
Thailand’s northern provinces, including Chiang Mai and Chiang Rai, are likely to face health-threatening haze problems from PM2.5 dust particles until at least early May.
— The Thaiger

A Snapshot of the Thai Vote Count
This chart summarizes voting results released by the Election Commission on Thursday accounting for 100 percent of votes cast in the March 24 parliamentary election.
— Benar News

UK Kings mystery of Thai ‘Lady of the Hills’
The discovery of an unidentified woman’s body on an English hillside more than a decade ago sparked a mystery still as yet unsolved.
— Bangkok Post

Thai rice exports facing strong regional competition
Rice exports are down in February’s sales figures, in both total volume and value. High prices and competition from Vietnam are being blamed, along with the ongoing strong baht.
— The Thaiger

Kingsgate prepares for legal challenge to mine closure
The Australian mining company Kingsgate Consolidated, armed with a US$55-million insurance payout for the closure of its gold mine in Thailand, says it now has the financial means to pursue its arbitration case against the Thai government.
— Bangkok Post

Pro-army party prioritises Thai king’s coronation over forming government
A party linked to Thailand’s ruling military junta said it will not hold talks to try to form the next government until after the coronation of King Maha Vajiralongkorn in May, with the outcome of last Sunday’s election still hanging in the balance.
— Reuters

Is the EEC’s future hanging in a balance?
The future of the Eastern Economic Corridor (EEC) could hang in a balance as it remains uncertain which parties will form the new government.
— Thai PBS World

Buriram villager killed by rampaging wild elephant
by Surachai Piraksa A 37 year old man from a village in Buriram province has been stomped to death by a wild elephant early today in Tambon Lam Nang Rong.
— The Thaiger

AOT board agrees to split airport duty-free concession
The board of the Airports of Thailand Company (AOT) has decided to split the concession to operate airport duty-free shops into two contracts – one for Suvarnabhumi and the other for Phuket, Chiang Mai and Hat Yai international airports.
— Thai PBS World

Wildfire engulfs 14 rai of forest in north
A wildfire raged through 14 rai of a Nan forest as fighter fighters from the municipality and the Pha Mueang Task Force were seen spraying water and keeping flames under control.
— NNT

Most people ‘satisfied’ with election results: Nida Poll
A majority of people are satisfied with both the outcome and the conduct of the March 24 election results, according to the result an opinion survey by the National Institute of Development Administration, or Nida Poll.
— Bangkok Post

Most people worried by alleged election fraud: Suan Dusit Poll
A majority of people say they are not happy with alleged fraud and unclear voting results in the March 24 election, according to the result of an opinion survey by the Suan Dusit Rajabhat University, or…
— Bangkok Post

Cooperation vital to end haze crisis
More than a decade after fine dust particles known as PM2.5 emerged as a health threat in Chiang Mai, the province has started to embrace a new approach that opens the doors to cooperation between state…
— Bangkok Post

Northern University Cancels Classes Due to Smog
A university in Chiang Rai province said its students will be dismissed for two days as air pollution continues to swell in the north.
— Khaosod English

Provinces battling water scarcity
Various provinces are coming up with ways to mitigate drought as water trucks are being deployed to non-irrigated communities.
— NNT

Bids to oust EC chiefs gain pace
Campaigns calling for the ousting of the poll commissioners have gathered momentum in the wake of reports of alleged irregularities in the March 24 general election.
— Bangkok Post

Police return assets to debtors exploited by loan sharks
The Metropolitan Police Bureau organized a handover ceremony, in which assets involved in loan shark cases were returned back to their original owners.
— Pattaya Mail

Bank of Thailand upbeat about key growth drivers
Although the private sector is increasingly concerned that the murky election result could stall economic momentum, the Bank of Thailand remains optimistic that domestic investment and consumption — two…
— Bangkok Post

Rangers free 6 trapped baby elephants in Thailand
Six baby elephants, trapped in a mud hole and separated from their parents, have been rescued by a team of park rangers in northeastern Thailand.
— AP

Sony moves smartphone production from China to Thailand to halve costs
Japanese electronics giant Sony is closing its Beijing smartphone plant and will shift production to Thailand in a move to cut costs in its unprofitable phone business, Reuters cited a company spokesman.
— Investvine

Bangkok Motor Show opens as Thai car sales move online
New Nissan all-electric LEAF, on display at the Bangkok Motor Show by Kingsley Wijayasinha “Despite the increase in sales online, including new automobiles, we’re not worried that fewer people will show up at the event to purchase vehicles.” More than 1.6 million visitors …
— The Thaiger

Thailand morning news for May 25