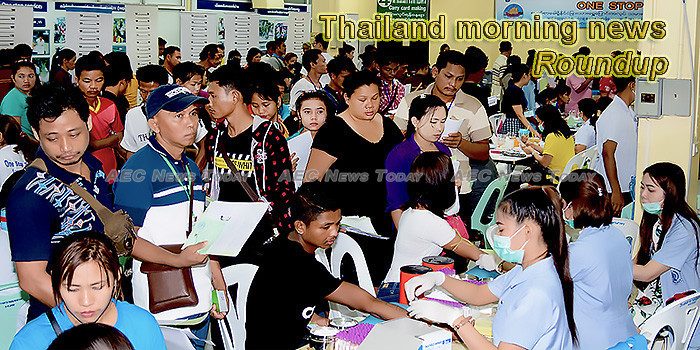 Doomed ‘Phoenix’ substandard: international experts
Police and international specialists have concluded the sunken Phoenix boat was substandard and illegally approved, and many officials and others connected with the July 5 tragedy will lose their jobs, the immigration chief said.
— The Phuket News

Prayut says EC will decide whether to allow foreign observers to monitor election
Prime Minister Prayut Chan-o-cha made clear today that the Election Commission will be the sole authority to decide whether or not to allow foreign observers to monitor the forthcoming election tentatively scheduled for February 14.
— Thai PBS World

Budget plan must be fair, says Prayut
Budget requests for 2020 must be in line with the 20-year national strategy, says Prime Minister Prayut Chan-o-cha.
— Bangkok Post

Redrawing boundaries, lawsuits cast doubt on credibility of Thai election
Thailand will soon hold its first election since the military seized power in a 2014 coup and many hope the vote will return Southeast Asia’s second-largest economy to democracy.
— Channel NewsAsia

Democrats doubt Prayut’s capacity to solve key issues
The Democrat Party says it is doubtful that Prime Minister Prayut Cha-o-cha can turn the country around if he makes a successful comeback as premier after the general election, as his regime’s efforts to tackle key issues such as economic stagnation and corruption have fallen short.
— Bangkok Post

Hemp proposed as alternative to medical marijuana
THE UNITED Nations will in the next few weeks consider whether to downgrade the classification of cannabidiol – currently a narcotic under international law, Kasetsart University agronomy lecturer Vichien Keeratinijakal said yesterday.
— The Nation

Major Amendments to Thailand’s Labor Protection Act to Take Effect in Early 2019
Thailand’s National Legislative Assembly passed a new act on December 13, 2018, which will amend the current Labor Protection Act (LPA). The new law will become effective 30 days after its publication in the Government Gazette, which is expected to be in early 2019.
— Lexology

Group Says It Will Ask Political Parties to Endorse Welfare State
A group of activists said Monday it will try to persuade political parties to turn Thailand into a welfare state.
— Khaosod English

IFC Invests $90 Million In TMB Bond, in Thailand
IFC, a member of the World Bank Group, has fully subscribed the $90 million bond issuance of TMB Bank, one of Thailand’s leading banks, which is dedicated to small and medium sized enterprises (SMEs).
— The Financial

DSI to probe reforestation irregularities
The Department of Special Investigation (DSI) is to summon a company contracted to reforest a 4,200-rai plot of land in Phetchaburi that turned out to already be an unspoilt forested area.
— Bangkok Post

Ride-hailing service Go-Jek launched in Thailand under ‘Get’
Indonesia’s ride-hailing provider launched its service under the name of Get on December 14 for the Thai market – at first with a beta motorbike-hailing and on-demand delivery services in Bangkok, where it will compete directly with regional rival Grab.
— Investvine

INNO4FARMER – Drive Thailand 4.0 through Agricultural Tech
AgTech Innovation Awards 2019 will be held to develop Thai farmers into entrepreneurs and help develop innovation that can benefit the entire country. Our correspondent has more details.
— NBT World (video)

Central bank recommends SMEs upgrade
Nearly one-third of small and medium-sized enterprises (SMEs) in the manufacturing sector are at risk of failure if they fail to adapt to a changing business landscape, says an economist at the Bank of Thailand.
— Bangkok Post

Govt plans to launch ‘blue economy’ fund
The government plans to set up a fund to help improve the livelihoods of traditional fishermen and their fishing capacity, in line with the principles of a “blue economy”.
— Bangkok Post

Flying? There’s an app for that
Thai Airways International (THAI) has launched a new “Thai Airways” mobile application, with a new look that makes the customer travel experience more comfortable and convenient.
— The Nation (annoying pop-ups)

Bumpy Road To Thailand’s General Election
The Thai junta’s Dec. 11 announcement lifting of its military-imposed ban on political activity hasn’t created much euphoria among the parties that aren’t nominated by the government.
— Asia Sentinel

EC Sec-Gen says Senator selection continues in an orderly fashion
The Secretary-General of the Election Commission (EC) has voiced confidence that the selection of Senators is taking place without incident at both the provincial and national levels, as preparations were thoroughly vetted.
— NNT

SET announces additional securities for six indices in first half of 2019
The Stock Exchange of Thailand on Monday announced the semi-annual review results for the SET50, SET100, sSET, SETCLMV, SETHD and SETTHSI indices, which will be used to revise the constituent securities for each index for the first half of next year.
— The Nation (annoying pop-ups)

Hunt for Phuket oil spill perpetrator underway
Phuket Vice Governor Thanyawat Chanpinit has called on the Phuket Marine Office to identify where the oil spill that washed ashore and coated that waterline black at Tungken Beach at Cape Panwa yesterday (Dec 16) and process the ‘highest legal case’ against them.
— The Phuket News

Tourists Are Being Lured With ‘Free’ Trips To Thailand That Turn Them Into Drug Smugglers
Unsuspecting tourists are being lured by the promise of free travel getaways that land them in an elaborate transnational drug smuggling syndicate.
— SAYS

Phayao set to boost number of tourists with Kwan Phayao app
Phayao province has planned to raise the number of visitors to 1.5 million in the next eight years and launched Kwan Phayao app to promote its tourism.
— NNT

Thailand Today 021: New tourism business programs to produce personnel in tourism industry.
Tourism is a pillar of the Thai economy and contributes some 9% to its GDP.
— NBT World (video)

Leopard sharks return to ‘East of Eden’ Similan Islands dive site
A inspection of the Similan Islands Marine National Park north of Phuket has confirmed that that marine environment at popular dive sites in the archipelago are recovering well, national parks officers have reported.
— The Phuket News

Government steps up efforts to help grocery stores
Prime Minister Prayut Chan-o-cha has confirmed that the government is urgently assisting grocery stores nationwide so that they can develop and strengthen themselves to better compete with large shops.
— NBT World (video)

British pianist plays classical music to soo the elephants at Thai sanctuary
Several times a week, British classical pianist Paul Barton, 57, sets up his piano against a backdrop of forested slopes and plays for his four-legged friends.
— NBT World (video)

Government keen to develop provinces in upper northeast
The Thai government is introducing measures to bring about the development of a provincial cluster in the Upper Northeast, known as the “Sabai Di” Cluster, which comprises the five provinces of Udon Thani, Nong Khai, Nong Bua Lamphu, Loei, and Bueng Kan.
— NBT World (video)

Min of Labor’s five NY gifts
The Ministry of Labor has introduced five measures in support of employers and employees alike, calling them New Year’s gifts to the people.
— NNT

PCD cleans-up river in no litter campaign
The Pollution Control Department (PCD) Director-General, Pralong Dumrongthai, said the Ministry of Natural Resources and Environment (MNRE) has joined hands with Thammasat University, the Ministry of Interior, civil society organizations, and partners, to arrange a boat rowing activity to clean up garbage from the Chao Phraya River, from Pak Nam Pho along a 400-kilometer stretch to the river mouth in the Gulf of Thailand.
— Pattaya Mail