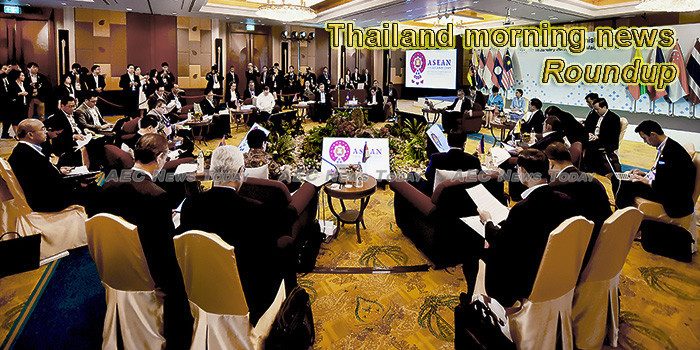 Smog expected to worsen on Monday
With air pollution lingering in Bangkok on Sunday and possibly set to worsen on Monday, the head of the Department of Health expressed concern for the health of people who work outdoors such as street vendors, traffic police, road sweepers and tuk-tuk drivers.
— The Nation (very annoying popups)

Hope for Rohingya: Asean foreign ministers put China, Myanmar on notice
A gathering of Asean foreign ministers in Chiang Mai, northern Thailand, on Friday signalled that the bloc is no longer prepared to ignore the actions of member states if it damages the image of the collective with external partners, at the same time putting China on notice over the South China Sea.
— AEC News Today

Poll shows people worried elections may not even be held
Since relevant agencies have failed to publish the electoral Royal Decree to announce a date for the national elections, uncertainty over whether the vote will even be held has become a top concern, a Suan Dusit poll learned recently.
— The Nation (very annoying popups)

Two arrested in Thai-Australian drug bust
Two transnational heroin smugglers – a Canadian national and a Thai man – have been arrested on drug charges and assets worth over 7.5 million baht seized, Office of the Narcotic Control Board (Oncb) ssecretary-general Niyom Termsrisuk said at a press conference on Sunday.
— Bangkok Post

BOT tipped to hold rate at 1.75% throughout year amid low inflation
THE BANK OF Thailand (BOT) will hold the policy interest rate at 1.75 per cent throughout 2019, Tada Phutthitada, president of the Thai Bond Market Association (ThaiBMA), predicted last week.
— The Nation (very annoying popups)

Getting to work: 2019 Asean Foreign Ministers’ Retreat – Day 2 (gallery)
Following a day of social and cultural immersion and one-on-one chats, Asean’s foreign ministers got down to the formal work on Friday (Jan 18) in the Grand Ballroom of the Shangri-La Hotel, Chiang Mai.
— AEC News Today

Sadao checkpoint to open 24 hrs
Thailand and Malaysia have agreed to extend the operating hours of the Sadao-Bukit Kayu Hitam Customs, Immigration and Quarantine (CIQ) Checkpoints to 24 hours for a three-month trial period, starting from April 1 this year, to reduce congestion at the border.
— Bangkok Post

TAT shows foreign visitors by the numbers
The Tourism Authority of Thailand published a breakdown of 2018 visitors by nationality on the Facebook page of its Intelligence Centre on Saturday night, with Chinese leading the tally, to no oneâs surprise.
— The Nation (very annoying popups)

A political game: Why Thailand’s election will be a win for the military
When Thailand officials hinted that scheduled elections to end military rule would be postponed for the fifth time in almost as many years, anger and frustration rippled through the country.
— CNN

Get tough on diesel, vehicle numbers to tackle smog, experts urge
THE SEVERITY of Bangkok’s air pollution suggests that the national government’s pursuit of a “low-carbon economy” has fallen short of needs, say experts, who recommend higher taxes on “dirty fuel” and a reduction in the number of vehicles on city streets.
— The Nation (very annoying popups)

Thailand’s NSTDA and UK hold Dissemination Workshop for Newton Rice Initiative
The National Science and Technology Development Agency (NSTDA) together with the Embassy of the United Kingdom in Bangkok and the UK Biotechnology and Biological Sciences Research Council (BBSRC) on January 18th held the Dissemination Workshop for Newton Rice Initiative at Centara Grand at Central Plaza Ladprao in Bangkok‎.
— NBT World (video)

Better safety measures for southern monks mooted
The government and National Office of Buddhism (NOB) are laying out safety measures to protect monks in the southern border provinces after a fatal attack at a temple in Narathiwat that killed two monk and injured two others.
— Bangkok Post

Police get the hoses out to tackle pollution
Traffic police and volunteers sprayed water at four locations in Bangkok on Sunday morning in a bid to curb the dust pollution.
— The Nation (very annoying popups)

Ex-PM Yingluck denies her involvement in Pheu Thai’s internal politics as she has pained enough from past politics
Fugitive former prime minister Yingluck Shinawatra claimed she has washed her hands off politics because she has suffered enough from her political role in the past.
— Thai PBS

Belarusian ‘Anastasia’ will be in Moscow detention another 3 days
Anastasia Vashukevich, aka. Nastya Rybka, the Belarusian model/sex-educator/Instagramer who spent a year in a Thai jail awaiting last week’s Court case, and was then deported, remains in a Moscow jail as of last night after the presiding judge decided to extend her detention by 72 hours.
— Thaiger

Big talk but little action on Rohingya
Though the crisis was subject of intense discussion discussed at the Asean meet, few decisions were made.
— The Nation (very annoying popups)

Two cops sustain serious injuries in roadside bomb blast
Two policemen were seriously injured in a roadside bomb explosion in a village in Nong Chik district of the southern province of Pattani this morning. The two police officers who…
— Thai PBS

New 500 baht fine for drunk cycling
Up to now drink-driving cyclists have not been included in the laws governing drunk drivers of other vehicles in Thailand. But with the rising popularity of cycling as a fitness trend, that’s about to change with a new 500 baht fine if bought drunk in control of a bike. Drunk bicyclists who are currently immune […]
— The Thaiger

Two arrested in crackdown on transnational drug ring
A Canadian man and his Thai male accomplice have been arrested in a joint operation to crack down on a transnational drug trafficking ring that tried to smuggle heroin hidden in automobile shock absorbers into Australia, Niyom Termsrisuk secretary-general of the Office of Narcotics Control Board (ONCB), told a press conference in Bangkok on Sunday.
— The Nation (very annoying popups)

First Thai cave rescue film due out on mission anniversary
A Thai-born director who took just weeks to shoot the first film about the dramatic cave rescue of the Wild Boars football team says his focus is on authenticity and the mission’s unsung heroes, with book publishers and Hollywood studios jostling to make their versions of the saga.
— The Nation (very annoying popups)

Teacher’s conference on improving English teaching
The English Teachers Association of Thailand has held the 39th academic conference at an international level on changes and opportunities in teaching English.
— NBT World (video)

Pro-democracy activists rally against election delay in Thailand
Pro-democracy demonstrators took to the streets of Bangkok on Saturday to call on the military government to hold the country’s general election next month as scheduled.
— The Mainichi

Thailand expects bright fisheries future
Thailand’s Fisheries Department expects a bright future for the local fisheries industry after the European Commission took Thailand off a group of “warned countries” in recognition of its “progress” in tackling illegal, unreported and unregulated (IUU) fishing.
— Vietnam Plus