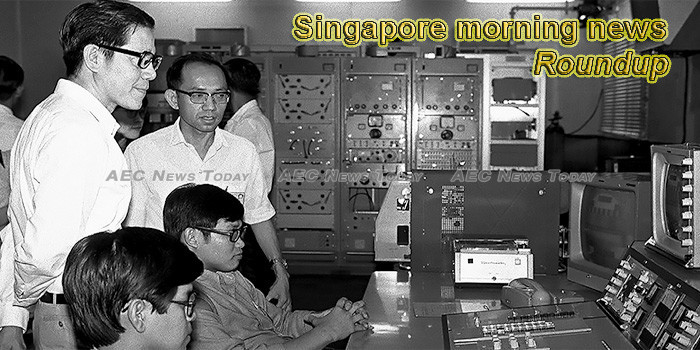 Singapore keeps top spot in Asia for IP rights protection
SINGAPORE is tops in Asia again in the strength of the protection it offers for intellectual property (IP) rights.
— The Business Times

Changi Airport to break passenger records in 2019 thanks to Jewel: PM Lee
AN ALL-TIME high of 65.6 million travellers passed through Changi Airport in 2018, and Prime Minister Lee Hsien Loong is confident that the record will be broken again this year because of the new Jewel Changi Airport complex.
— The Business Times

Food security just one part of Singapore’s diversification strategy, says Chan Chun Sing
Ukrainian eggs now sit on supermarket shelves and sell for the same price as those imported from Malaysia, which helps to offset supply disruptions and price changes from across the Causeway.
— Straits Times (annoying popups)

Transparent bin and other fresh ideas from public workgroup to help Singapore recycle right
A mobile application that provides incentives and discounts to motivate customers to bring their own containers to dabao (or take-away) their food, instead of using single-use plastic containers.
— Straits Times (annoying popups)

Commentary: We can’t save the Sentosa Merlion, but can sure protect other aspects of Singapore’s heritage
In space-starved Singapore, it is important to preserve our intangible cultural icons too, says Karen Tee.
— Channel NewsAsia (very annoying popups)

Singapore’s pro bono heroes: Lawyers who save ‘hopeless’ cases from death row for free
Seven lawyers, who did pro bono work with those facing the death penalty, have been honoured by Chief Justice Sundaresh Menon.
— Straits Times (annoying popups)

Commentary: Rule of law is an ‘existential necessity’ for Singapore
Chief Justice Sundaresh Menon on Wednesday (Oct 15) delivered the S Rajaratnam Lecture 2019 on the rule of law, the international legal order and the foreign policy of small states. This is an edited version of his speech.
— Channel NewsAsia (very annoying popups)

Police looking into another Telegram chat group allegedly circulating obscene materials
Images of children and pupils in their school uniforms are among the materials shared by members of the chat group, SharingIsCaring.
— Straits Times (annoying popups)

Non-mainstream faiths welcome, as long as they don’t disrupt nation
From breakaway sects to fringe religions, various terms have been used for non-mainstream faiths that have made their way to Singapore in the last century.
— Straits Times (annoying popups)

MPs respond to climate rallygoers’ ideas
Less than a month after the first Singapore Climate Rally was held here, MPs took to social media yesterday to reiterate their will to make sure more is done for the cause.
— Straits Times (annoying popups)

Why restaurants in Singapore are opening and closing at record rates
Singapore is well known as a paradise for food lovers, but not so for restaurants that are finding it hard to stay open.
— Straits Times (annoying popups)

When you don’t file your tax returns or pay on time
While most taxpayers – individuals and corporates – declare their taxes accurately by the due date and pay them on time, a small number of them do not comply.
— Straits Times (annoying popups)

SDP holds Hong Lim Park rally, which it says is ‘full-dress rehearsal’ for next general election
The Singapore Democratic Party (SDP) members and supporters were out in force on Saturday (Oct 19) evening at Hong Lim Park where the party held a pre-election rally with the theme Shake It Up!.
— Straits Times (annoying popups)

What next for the Singapore People’s Party?
The name, Chiam See Tong has been synonymous with Singapore politics for almost four decades, ever since he won the Potong Pasir seat at the General Elections held on 22 December 1984.
— The Online Citizen

Creative Capital: The Danish expat making art Singaporeans love to take selfies with
You might not be familiar with Tina Fung and her studio Space Objekt, but we bet you’ve posted lots of photo of their captivating installations on social media.
— Channel NewsAsia (very annoying popups)

Horse therapy gaining traction in Singapore
The weather on this September afternoon is hazy and humid, but it does nothing to dampen the spirits of the 10 nursing home residents – some of whom are in wheelchairs – who are eagerly waiting to walk with and groom two gentle beasts.
— Straits Times (annoying popups)

Chiam See Tong’s political legacy preserved in upgrading
When upgrading work was being carried out in Potong Pasir in 2016, efforts were made to retain certain features of Potong Pasir Neighbourhood Park, given the significance it holds for Mr Chiam See Tong, who was the area’s MP for 27 years.
— Straits Times (annoying popups)

Singaporean biotech startup Curiox receives US$15M investment, planning Korean IPO
Curiox Biosystems, a bio-instrumentation startup based in Singapore, announced that it has received US$15 million in its Series B funding round from Korean biotech investors, DealStreetAsia reported.
— e27

S’porean actor Andie Chen landed breakout role in local drama because he didn’t listen to his manager
Besides managing his own acting career and producing videos for his YouTube pages, Chen has also recently invested in his younger brother’s new business (more on that later).
— Mothership

About 10 involved in fight in Tanjong Pagar, with one allegedly using a knife
About 10 people were involved in a fight along Tanjong Pagar Road, with one of them said to have used a knife while another was seen with a bleeding ear, Shin Min Daily News reported on Sunday (Oct 20).
— Straits Times (annoying popups)

23-year-old man tussling with S’pore police in viral video arrested for suspected drug-related offences
The police were alerted to a case of a man shouting incoherently.
— Mothership

Merdeka Generation roadshows help educate seniors on package benefits
Sunday’s edition, the 17th of its kind, aimed to reach out to the Malay community to promote these benefits, as well as encourage the spirit of community self-help and volunteerism.
— Straits Times (annoying popups)

Brothers take a leap of faith in Scientology
They are among the few followers in Singapore of a church that has drawn controversy abroad.
— Straits Times (annoying popups)

It Changed My Life: How Shawn Lee overcame a broken childhood to be a mover and shaker in the beauty industry
Shawn Lee, who was once depressed and insecure, now gives the marginalised a voice to tell their stories.
— Straits Times (annoying popups)

Goodbye, Mr Wee: An immigrant recounts how the owner of Wee Nam Kee became a family friend
Last week, I said goodbye to an extraordinary individual who played no small role in my Singapore journey.
— Straits Times (annoying popups)

NTU building and road renamed in honour of pioneers
A building and a road at Nanyang Technological University (NTU) have been given new names to mark pioneers’ contributions to the development of Singapore’s education system.
— Straits Times (annoying popups)

Man, 61, arrested for depositing fake S$10,000 note given to him by ‘unknown foreign man’
A 61-year-old man was arrested on Friday (Oct 18) after he was suspected of using a fake S$10,000 Portrait Series note.
— Channel NewsAsia (very annoying popups)

Rock bands Scorpions and Whitesnake to headline Singapore RockFest II
It’s going to get loud at Fort Canning Park on Mar 4 next year with these legendary bands playing hits such as Still Loving You and Here I Go Again.
— Channel NewsAsia (very annoying popups)