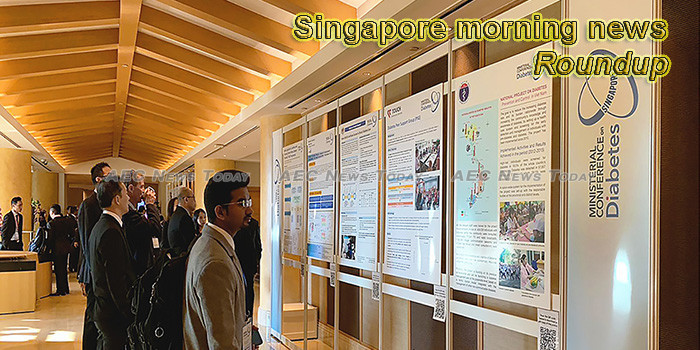 $15.3b in special transfers to S’poreans: GPC urges funding sustainability and encouraging SMEs uptake of tech, R&D
A total of $15.3 billion was set aside under Budget 2019 for special transfers to meet the current and future needs of Singaporeans.
— Straits Times (annoying popups)

First-of-its-kind drug for Type 2 diabetes launched in Singapore
For adults suffering from uncontrolled Type 2 diabetes, help is at hand with what is touted to be the most effective solution in the market.
— Straits Times (annoying popups)

Euro to continue slide against Singapore dollar: DBS analysts
DBS analysts are expecting the euro to keep weakening against the Singapore dollar, according to a research note released by the bank on Thursday (Nov 14).
— Straits Times (annoying popups)

Over half of Singapore’s $19b fund for research, innovation committed to date
About $9.8 billion of the $19 billion sum earmarked for the Research, Innovation and Enterprise 2020 (RIE2020) plan has been committed as at the end of financial year 2018, with the five-year plan on track to meet its industry project target and having already exceeded its targeted number of start-ups.
— Straits Times (annoying popups)

France to start setting quotas on foreign skilled workers while S’pore says no quota for EP holders
Last Tues (5 Nov), Reuters reported that France will soon start to implement tough policies to control immigration. For the first time, France will set quotas for the number of immigrant workers from outside the EU it allows into the country, French Labour Minister Muriel Penicaud said last week.
— The Online Citizen

377A case: Declassified documents show that the law was targeting male prostitutes, argued legal team
A new challenge of Section 377A of the Penal Code is being brought to Singapore’s High Court, this time by Mr Bryan Choong, former executive director of non-profit organisation Oogachaga, looking to repeal the law on several grounds.
— The Online Citizen

TransferWise is giving away S$150,000 prize money to Singaporeans affected by hidden bank fees
After winning S$150,000 in prize money earlier this week at the Singapore Fintech Festival, leading global financial technology company TransferWise announced today (14 Nov) it will be giving away that money to Singaporean individuals and small businesses hit by hidden bank fees at home and abroad.
— The Online Citizen

Singapore scientists use printing machine to make ‘human skin’
A piece of skin about the size of your thumbnail can be printed in less than a minute, scientists in Singapore say, a game-changing step for the future of non-animal testing for cosmetics and other products.
— Straits Times (annoying popups)

F&N full-year earnings soar 24% as beverages and dairy products rake in higher revenue
Consumer group Fraser and Neave (F&N) lifted its numbers for the year thanks to due to higher contributions from its beverages and dairies segments.
— Straits Times (annoying popups)

Doctor suspended one year for giving patients hundreds of sleeping pills
A doctor who had, among other things, given one patient 1,100 sleeping pills over 33 months – or more than one a day – has been suspended from practice for a year.
— Straits Times (annoying popups)

Mixed fortunes of zero-waste stores in Singapore: More effort needed for culture to take off
Local zero-waste store Reprovisions, which was located in Jurong Point shopping mall, shut down this week, after about a year in business.
— Channel NewsAsia (very annoying popups)

ESG’s venture arm SEEDS S$140m in funds over three years
SINGAPORE-BASED venture capital (VC) firm Wavemaker Partners might now be known as one of the handful of VCs specialising in deep tech, but it might have turned out differently had it not taken its first taste of the sector through a co-investment.
— The Business Times

Guided walks focused on Singapore’s racial and religious diversity to be launched
A church with lotus carvings on display. A Hindu temple that is home to a relic of the Buddhist goddess Guan Yin.
— Channel NewsAsia (very annoying popups)

ITE students mix it up with Instagram-able mocktails in competition
Presented in a tall cocktail glass, Call Me Peachy is orange, frothy and a toast to strong women.
— Straits Times (annoying popups)

Haidilao customer fined $4,000 for smashing sauce bowl into another diner’s face
Infuriated by a fellow customer who had put his food bowl on a condiment counter in steamboat restaurant Haidilao, a man smashed a sauce bowl on the other man’s face after arguing with him.
— Straits Times (annoying popups)

Boy and woman found dead in area close to Bukit Timah Nature Reserve
The police said they were alerted to the two cases of unnatural deaths along Lorong Sesuai at 6.42am.
— Straits Times (annoying popups)

A bigger Artbox Singapore is back for a third year at new Turf Club venue
The event will run over two consecutive weekends, starting Friday (Nov 15), at The [email protected]
— Channel NewsAsia (very annoying popups)

Man who beat up maid and brother-in-law after feeling slighted jailed 15 months
When his mother complained that their maid was disrespectful, Benjamin Putra Chumali kicked and punched the 32-year-old Philippine national so hard, her head hit a cupboard glass panel and shattered it.
— Straits Times (annoying popups)