Singapore morning news for May 30 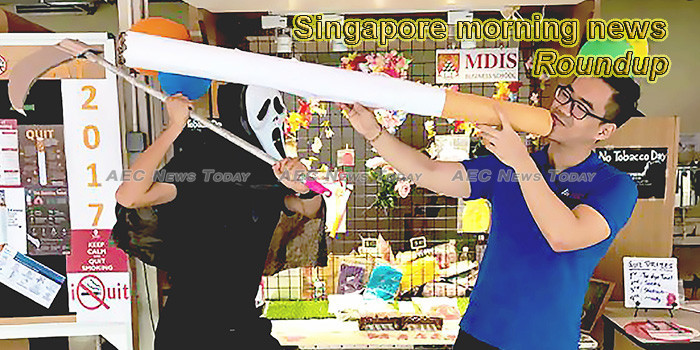 Singapore, China agree to revise defence pact
China and Singapore have agreed to revise a defence pact, which could include larger-scale military exercises and frequent high-level dialogues, as part of efforts to deepen defence ties and cooperation.
— Straits Times (annoying popups)

Financial crimes hit 82% of S’pore firms in past year: Report
When it comes to falling victim to financial crime, 82 per cent of Singapore companies surveyed did so over the past 12 months, according to a Refinitiv report.
— Straits Times (annoying popups)

Singapore: Mao Shan Wang durian prices plunge by $10 per kg
It is durian season in Singapore and prices have been plunging. This is caused by an increase in the supply of the fruit from Malaysia.
— Fresh Plaza

SingPost finds lost package after viral complaint but says declared value of package was $300, not $1500
Singapore Post (SingPost) has told The Independent that it has found the lost package belonging to Facebook user Fatah Kent, after Kent’s complaint that SingPost lost his parcel from Australia went viral on social media.
— The Independent

Dengue spike flags likely epidemic
Singapore is headed for a dengue epidemic this year, in spite of heightened efforts by the National Environment Agency (NEA) to curb the spread of the Aedes aegypti mosquito.
— Straits Times (annoying popups)

HSBC to boost retail wealth staff in S’pore
HONG KONG • HSBC Holdings plans to boost its Asia retail wealth management staff by about 300 by the year end, with Europe’s biggest lender by assets sharpening its focus on Singapore to add to its presence in the core markets of Hong Kong and China.
— Straits Times (annoying popups)

Police issue alert over WhatsApp takeover scam
The police have issued a warning against scammers who attempt to take over WhatsApp accounts by first pretending to warn account owners about such scams.
— Straits Times (annoying popups)

World’s largest gaming festival coming to Singapore in 2020
Singapore’s gaming industry is about to get even bigger, when the country hosts an Asian edition of gamescom next year.
— Channel NewsAsia (very annoying popups)

Singapore refutes US accusation of currency manipulation
SINGAPORE does not and cannot use the exchange rate to gain an export advantage or achieve a current account surplus, the Monetary Authority of Singapore (MAS) said in response to the US Treasury’s move to put Singapore on an updated watch list over its uncommon exchange rate and its …
— The Business Times

CAD seizes Allied Tech documents, interviews exec director Kenneth Low
ALLIED Technologies executive director Kenneth Low Si Ren has been called in by the commercial crime police to help with investigations into the affairs of the company and its subsidiaries.
— The Business Times

Braddell View another victim of moribund en bloc market
THE collective-sale cycle appears to be running out of steam, with no residential projects having achieved a successful outcome so far this year; the mega Braddell View estate has become the latest to reach its tender close with zero bids.
— The Business Times

Firm linked to 2015 haze gets green certification
One of the biggest corporate culprits behind the 2015 haze has been endorsed by the Singapore Environment Council (SEC), almost four years after its products were blacklisted here.
— Straits Times (annoying popups)

Woman kept $50k banked into her account from love scam
A part-time English teacher met a man online, who convinced her to allow $50,030 to be deposited into her bank account.
— Straits Times (annoying popups)

Man jailed for stabbing son over $8,000
A father has been jailed for four weeks after he stabbed his son with a knife in a dispute over money used to pay unlicensed moneylenders.
— Straits Times (annoying popups)

Grim reminders from exhibits highlight diabetes risks
Rows of giant eyeballs sit atop ice cream cones, a barbecue pit stacked with salted human hearts, kidneys being roasted on a spit, and a coffin which opens up to reveal the contents of a refrigerator.
— Straits Times (annoying popups)

Singapore must get fundamentals right to stay competitive, says Chan
Singapore’s ranking as the world’s most competitive economy is encouraging, but it has to continue to create opportunities for its people and businesses, said Trade and Industry Minister Chan Chun Sing.
— Straits Times (annoying popups)

SDP’s Dr Chee: “A party that has been in power for too long will bully the people”
The Singapore Democratic Party’s (SDP) Dr Chee Soon Juan released a video of some of the common concerns faced by Singaporeans.
— The Independent

Talk by fugitive match-fixer axed on police advice
A talk touted as an evening with a convicted football match-fixer was cancelled after police advised the organiser not to proceed with it.
— Straits Times (annoying popups)

Judge calls siblings’ dispute over dogs ‘strange’
A long-running dispute between siblings over a house willed to them by their late mother gave a judge pause when the disagreement turned towards whether one of them had the right to move in with two of her dogs.
— Straits Times (annoying popups)

$50k NUS prize for inspiring story on Singapore history
The life of a coolie, the history of food production or even the story of the first telegraph that was transmitted from Singapore’s Fort Canning Hill to London in 1871.
— Straits Times (annoying popups)