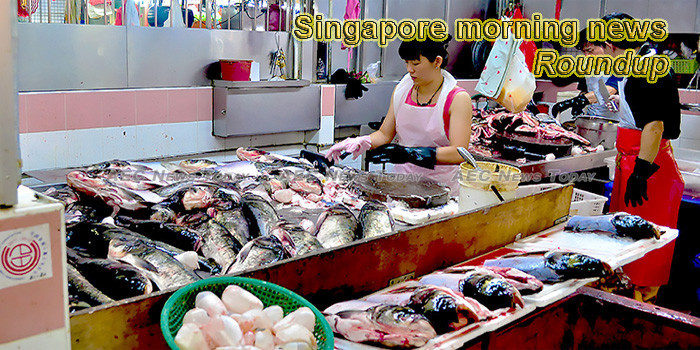 No ifs or butts: Cigarette rubbish is littering Singapore’s coastline
Mention the phrase “marine litter” and chances are that images of plastic straws or bottles would be the first things to spring to mind.
— Channel NewsAsia (very annoying popups)

Singapore CBD Grade A office rents to climb 8% in 2019: Colliers
RENTS for Grade A office buildings in Singapore’s Central Business District (CBD) are expected to rise by 8 per cent this year, and 5 per cent in 2020, amid tight supply and high pre-commitments, according to a report by Colliers International.
— The Business Times

SIA among airlines rerouting to avoid parts of Iran-controlled airspace after US regulator’s order
Singapore Airlines (SIA) is among some global airlines that are rerouting flights to avoid Iran-controlled airspace over the Strait of Hormuz and Gulf of Oman, it said on Friday (Jun 21), after the US aviation regulator barred its carriers from the area until further notice.
— Channel NewsAsia (very annoying popups)

Over 370k inspections done, 900 homes fined in first 5 months: NEA
More than 372,000 inspections were carried out by the National Environment Agency (NEA) in the first five months of this year to check on mosquito breeding across the country amid a surge in dengue cases.
— Straits Times (annoying popups)

Jurong industrial fire: Affected Chinese nationals receiving assistance from Migrant Workers’ Centre
Two workers who were injured in the massive fire at a Jurong LPG facility in Jalan Buroh are recovering, and one of them has been discharged from hospital.
— Channel NewsAsia (very annoying popups)

President Halimah Yacob underlines importance of appreciating diversity and upholding social cohesion in three-day conference
The importance of “engaging meaningfully” with and upholding social cohesion among members of a diverse Singapore society were the key messages conveyed by the President of Singapore Halimah Yacob throughout a three-day conference, which began on Wed (19 Jun).
— The Online Citizen

Commentary: What 2019’s graduating jobseekers need to know – four recession-proof strategies
Don’t despair in the maze of finding a job. Graduates need to believe that they have something valuable to contribute to the world, says Forest Wolf’s Crystal Lim-Lange.
— Channel NewsAsia (very annoying popups)

Singapore well-placed for Russia resurgence in Asia
WHEN one thinks of Russia, typical images that pop up are likely to be those of KGB agents reminiscent of a James Bond movie and murky fortunes that can buy influence over democracy and undermine the rule of law.
— The Business Times

Silver lining for tech and health graduates amid economic gloom
AMID the gloomy economic outlook and a tight labour market, the tech and healthcare industries are poised to remain buoyant with plenty of job opportunities, according to various recruitment firms.
— The Business Times

Participants share racism experiences at dialogue
A 71-year-old Sikh shares candidly his experiences as a victim of racism in Singapore. He adds: It is factual that Chinese nationals are loud and rude.
— Straits Times (annoying popups)

Millennials rate emotional skills as most important for future of work
Many young workers seem to feel that getting along with their colleagues will be more important than being able to code a website.
— Straits Times (annoying popups)

Ground up support for senior citizens
Kindness and support come in many ways indeed. For one food stall owner, helping the country’s elderly comes in the form of 100 free plates of Hainanese chicken rice every Wednesday for seniors of the Pioneer Generation, Singaporeans born on or before December 31, 1949. “The government does it their way, I …
— The Independent

Is DBS Group, UOB or OCBC the Cheapest Singapore Bank Now?
All three local banks’ stock prices are down by more than 10% from their peaks. But which one should investors consider now? Find out here.
— The Motley Fool

Crocodile spotted in drain in Sungei Kadut caught, transferred to farm: NParks
A crocodile that was seen in a drain at Sungei Kadut Drive on Friday (Jun 21) has been caught and transported to a crocodile farm, said National Parks Board (NParks).
— Channel NewsAsia (very annoying popups)

A 3D-printed ‘arm’ could be the helping hand amputee Tan Whee Boon needs to land a job
A motley crew of makeathon participants is fine-tuning a prosthetic arm for Tan, who lost his limbs after eating a plate of raw fish in 2015, to allow him to overcome everyday challenges like grabbing a shower hose.
— Channel NewsAsia (very annoying popups)

PMDs going cheap as new safety norm deadline nears
Users who have PMDs that do not comply with the UL2272 standard can continue to ride them until the end of next year. From 2021, it will be illegal to use non-compliant devices in public areas.
— Straits Times (annoying popups)

Over 50 young talents audition for ChildAid concert
More than 50 performers aged between six and 19 auditioned yesterday for a spot in this year’s ChildAid, an annual charity concert co-organised by The Straits Times and The Business Times, which will be held later this year.
— Straits Times (annoying popups)

More protein in ice cream, soups to boost seniors’ health
Half the seniors in Singapore are not getting enough protein in their diets, increasing their risk of not just fractures, but also of dying.
— Straits Times (annoying popups)

Jalan Buroh fire: Worker in hospital is conscious, able to communicate freely, says Migrant Workers’ Centre
A worker who remains in hospital after a massive fire broke out at an LPG facility in Jalan Buroh in Jurong is conscious and able to communicate freely, the Migrant Workers’ Centre (MWC) said in a Facebook update on Sunday (Jun 23).
— Channel NewsAsia (very annoying popups)

Tanglin Halt bids farewell to people’s doctor
At least 60 of Dr Chan Khye Meng’s patients past and present gathered at Meng’s Clinic to celebrate his 55-year career and to bid farewell to a beloved member of the Tanglin Halt community.
— Straits Times (annoying popups)

Singapore morning news for May 13