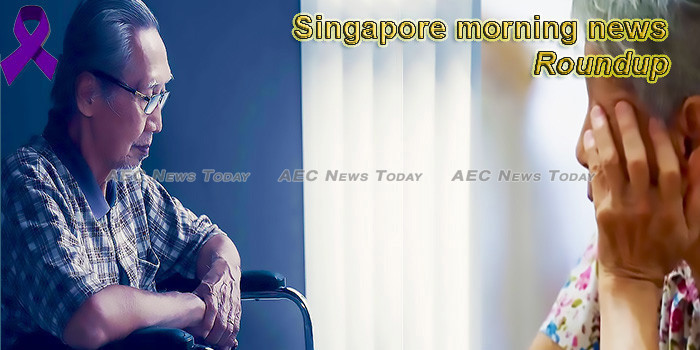 Retrenchments rise, vacancies fall as job market turns soft
Retrenchments rose in the first quarter of the year as the manufacturing sector shed staff, after likely being hit by the escalating trade war between the United States and China.
— Straits Times (annoying popups)

New police e-commerce fraud unit nabs 26 scammers in 2 months
As the number of online shoppers grows, so has the number of e-commerce scams, which rose by 11.4 per cent to 2,125 cases last year, up from 1,907 in 2017.
— Straits Times (annoying popups)

“Where is the magic moving escalator?”Lawyer Khush Chopra questions Tharman on his statement on upward mobility of all citizens
Senior Minister Tharman Shanmugaratnam, who is also Coordinating Minister for Social Policies, said at the Institute for Government’s 10th-anniversary conference in London on June 12, that society needs a moving escalator that ensures the upward mobility of all citizens.
— The Independent

A Deeper Look Into SIA Engineering’s 52% Share Price Decline
SIA Engineering Company Ltd (SGX: S59) has seen its share price withering over the last five years. Is this justified, and is a turnaround in the cards?
— The Motley Fool

How to Set Up a Non-Profit Organization in Singapore
In this issue of ASEAN Briefing magazine, we discuss the options available to foreign nationals and entities for setting up a non-profit organization (NPO) in Singapore.
— Asia Briefing

Gojek customers can now pay for rides with DBS PayLah!
Gojek riders can pay for their rides via DBS PayLah!, as DBS and Gojek expand their payment services partnership in Singapore.
— Straits Times (annoying popups)

Grab said to have held talks to buy payments start-up 2C2P
Singapore ride-hailing giant Grab held talks to acquire payments provider 2C2P and was turned down, according to sources, a sign of the ambitions South-east Asia’s most valuable start-up has in financial services.
— Straits Times (annoying popups)

ExxonMobil completes expansion of S’pore refinery
American oil and gas giant ExxonMobil has completed an expansion at its Singapore refinery in Jurong to upgrade the production of its proprietary EHC Group II base stocks, it said in a media statement on Wednesday night.
— Straits Times (annoying popups)

Retrenchments grow in Q1 as manufacturing takes a hit: MOM
Retrenchments rose in the first quarter of the year, driven by losses in the manufacturing sector, the Ministry of Manpower (MOM) said on Thursday (Jun 13).
— Channel NewsAsia (very annoying popups)

Who runs the Facebook pages of cabinet ministers? Who pays them?
In early 2019, Facebook released a new tool called ‘Page Transparency’ which allows people access to more information about a page and who is managing it.
— The Online Citizen

Trust placed on teachers shouldn’t be ‘trivialised’: MOE on comments that sexually exploited boy was ‘lucky’
The integrity of the teaching profession and the trust placed on teachers in all their interactions with students is a serious matter and should never be trivialised, said the Ministry of Education (MOE).
— Channel NewsAsia (very annoying popups)

Singaporeans booking travel deals to Taiwan most vulnerable to fraud, says McAfee study
There’s no doubt that Singaporeans love travelling and they’re constantly on the lookout for novel travel destinations and experiences.
— The Online Citizen

4 Companies Which Exhibited Growth in the Recent Quarter
Growth does not come easy in the current tepid economic environment. Here are four companies which have managed to thrive against the odds.
— The Motley Fool

Victims must be given a voice in disciplinary process: Student poll
From the moment a student falls victim to a sexual offence, the university must do all it can to help him or her, and this includes allowing the victim to speak up during the disciplinary process.
— Straits Times (annoying popups)

Punish sexual offenders, but give them support too: Survey
Students should receive harsh punishment if they are found to have engaged in sexual misconduct – but they should also receive some form of support, a survey of National University of Singapore (NUS) students has found.
— Straits Times (annoying popups)

Ex-fire station chief says he would have acted if he knew
When asked what he would have done if he had seen Corporal Kok Yuen Chin being carried to the pump well on May 13 last year, former Tuas View Fire Station commander Huang Weikang said he would have put a stop to it.
— Straits Times (annoying popups)

Safety in spotlight after death of guard who fell into pit
Safety precautions and regulations are usually in place to avoid tragedies like that which befell 1-Altitude employee Shaun Tung, who fell into a 4m-deep pit and died on Sunday, observers said.
— Straits Times (annoying popups)

3 arrested for loan shark activities after tomato sauce, paint splashed on gate and vehicle
Two men and a woman were arrested on Wednesday (Jun 12) in two separate cases of loan shark harassment after a vehicle was splashed with paint and tomato sauce was thrown onto a gate.
— Channel NewsAsia (very annoying popups)

Family of otters run around Shenton Way
A video of a group of otters running around at Shenton way has gone viral after being widely circulated on Whatsapp Messenger and social media.
— The Independent

Photo of Khaw Boon Wan lookalike on the train goes viral
Much to the amusement of many netizens, a photo of someone who looked like Transport Minister Khaw Boon Wan sleeping on the MRT has gone viral.
— The Independent

Netizens call for a smoking ban after NEA investigates smoker caught on thermal camera in HDB corridor
The National Environment Agency (NEA) has gotten in touch with a resident at Bedok to furnish details after a smoker was caught smoking multiple times at the corridor of his flat. The smoker’s action was captured by a thermal camera installed near the corridor.
— The Online Citizen

STB and Tiger Beer commit S$3.2m in two-year joint marketing push
THE Singapore Tourism Board (STB) and local alcohol brand Tiger Beer have committed a total of S$3.2 million to a two-year marketing partnership, they said on Thursday.
— The Business Times

Youth gets 18 months’ probation for molesting girl, aged 12
Pretending that he needed help for a photography competition, Lester Ong Pei Cong lured a 12-year-old girl to a staircase landing, where he molested her.
— Straits Times (annoying popups)

Haw Par Villa snapshots, then and now
MIn 1973, a boy named Hercules visited Haw Par Villa. His mother took him and his five siblings – Hector, Hubert, Harold, Helen and Hazel – through the 10 Courts of Hell, where she highlighted some of the punishments meted out to sinners.
— Straits Times (annoying popups)

‘He looked more dead than alive’: Ship captain who rescued Singaporean drifting at sea for 4 days
As their ship inched towards the naked man clinging to his ring buoy, Captain Cornelis Plugge and First Officer Srdan Bazdan of the Diogo Cao thought he was dead.
— Straits Times (annoying popups)

British man calls S’pore a Disneyland for adults with little racism after 9 years here
He met some really good locals, and finds the country extremely safe to live in.
— Mothership

Singapore morning news for May 14