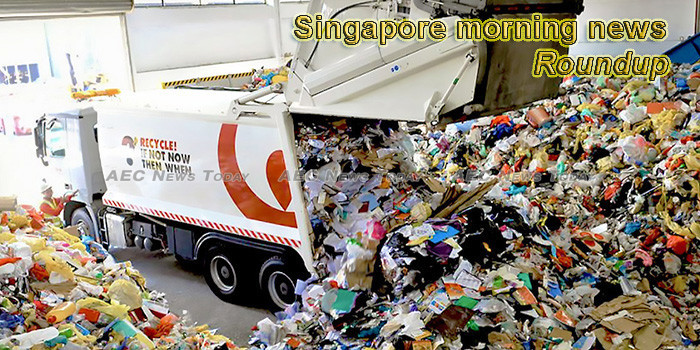 Singapore’s dengue cases hit a new high at 499 cases in a week, five times more reported cases than same period in 2018
The nation is currently affected with a dengue outbreak. In fact, the seriousness of the issue can be seen when 499 people were diagnosed with dengue fever last week, the highest weekly number in more than four years since 2015.
— The Online Citizen

Six months in jail for engineer linked to PIE viaduct collapse case
An engineer who failed to go through the detailed plans and design calculations for permanent corbels, or support structures, for the Pan-Island Expressway (PIE) viaduct near Upper Changi was sentenced to six months in jail yesterday.
— Straits Times (annoying popups)

Audio/video recordings inside taxis soon to be legalised in Singapore; Crime busting or invasion of privacy?
No more secrets? Singapore’s Land Transport Authority (LTA) has issued the latest directive announcing that audio recording and inward-facing recording devices inside taxis and private-hire cars will soon be legal in Singapore.
— The Independent

These tech companies are eyeing for Singapore’s digital banking license
On Friday, June 28, Monetary Authority of Singapore (MAS) Chairman Tharman Shanmugaratnam announced that the government is set to issue up to five digital banking licenses to provide an opportunity for non-bank finance industry players to enter the banking scene, which is currently dominated by traditional banking institutions.
— e27

Singapore loses top spot to Switzerland as best place for expats: HSBC
SWITZERLAND is now the best place in the world for expats to live and work.
— The Business Times

Trade, political tensions ‘remain uncertainties in H2’
HEIGHTENED trade and geopolitical tensions have dimmed the near-term outlook for the global economy, despite an increasingly accommodative stance from central banks (including the US Federal Reserve) and little signs of financial imbalances, BlackRock has said.
— The Business Times

Unions to keep up the pace of efforts to help workers: Ng Chee Meng
Fifty years after the labour movement changed its course and took on a more collaborative approach to working with the Government and employers, labour chief Ng Chee Meng yesterday pledged that unions will keep up the pace in their efforts to improve the lot of workers.
— Straits Times (annoying popups)

Panel mooted to promote caring transport culture
Efforts to promote a caring commuter culture will get a national push. The Public Transport Council (PTC) has recommended a new committee to make the public transport system a more caring, welcoming and inclusive one.
— Straits Times (annoying popups)

Virtual reality as physiotherapy for dementia patients
The use of virtual reality (VR) as part of therapy for those with dementia will be rolled out by the end of this month at the Alzheimer’s Disease Association (ADA).
— Straits Times (annoying popups)

Why does a private clinic charge less for consultation than the unsubsidised cost of the same at a public polyclinic?
Healthcare is a major point of concern for Singaporeans. It’s a universal issue that is constantly debated on by both citizens and politicians alike. In fact, much has been said about how splendid healthcare is in Singapore and how citizens and PRs enjoy affordable healthcare here.
— The Online Citizen

Singapore’s strong corp governance and tax support big draws for foreign Reits
WHEN Frasers Logistics & Industrial Trust was mulling a listing venue, Australia was a possible choice given the real estate investment trust has more than 65 per cent of its assets Down Under.
— The Business Times

Court orders US$620,900 to be returned to ex-jockey
About a year before he retired in 2012, top jockey Saimee Jumaat was advised by two financial advisers to place US$620,900 in a foreign exchange trading service run by a company called SMLG.
— Straits Times (annoying popups)

Ex-banker jailed for cheating clients of $14m
In an attempt to pay back his former clients, a private banker forged signatures and documents to siphon US$10 million (S$13.6 million) from his clients’ Barclays bank accounts.
— Straits Times (annoying popups)

Man who caused death of waitress in row gets life term, caning
A 28-year-old man who flung his friend over a parapet in a multi-storey carpark during a row over a mobile phone was yesterday sentenced to life imprisonment and 12 strokes of the cane for murder.
— Straits Times (annoying popups)

FDA list of dog food not the only link to heart disease: Vets
Do not panic just yet if you are feeding your dog kibble from one of the 16 brands named as having a potential link with canine heart disease.
— Straits Times (annoying popups)

Dormitory operator and director charged
The director of a dormitory operator appeared in court yesterday after checks on four of the company’s facilities revealed that they were filthy and unacceptable, with problems such as faulty toilet bowls and cockroaches in the rooms.
— Straits Times (annoying popups)

Fires raze home, bus in east and west of Singapore
A fire left little but burnt rubble in the living room of a two-storey maisonette flat in Tampines Street 11.
— Straits Times (annoying popups)

NUS Political Science Society pushes cancellation of international event to its former business director’s fault
Political Science Society (PSSOC) of National University of Singapore (NUS) has issued a statement on the canned Asia-Pacific Model United Nations Conference 2019 (AMUNC), saying that it is not the organiser of the event but will nevertheless assist participants to process the refunds.
— The Online Citizen

Suspect arrested after man’s fingertip cut off in assault: Police
A 50-year-old man was arrested on Tuesday (Jul 2) after he allegedly cut off the tip of another man’s right middle finger, police said in a news release.
— Channel NewsAsia (very annoying popups)