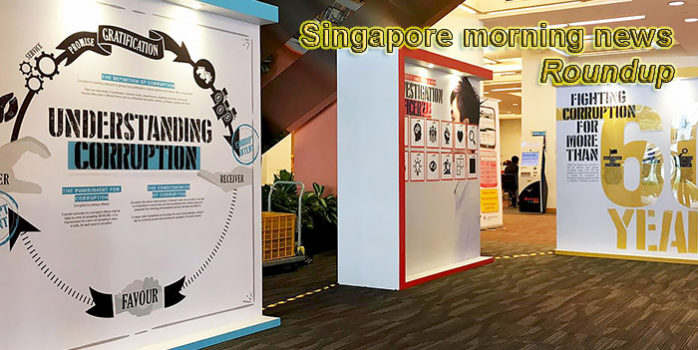 Singapore is the second hardest-working city in the Asia-Pacific region behind Tokyo, reveals Instant Offices analysis
After analysing data on 40 international cities, global serviced office provider Instant Offices have provided a work intensity score index on the most hard-working Asia-Pacific cities, taking into account several factors per city, including the length of commute, arrival time at work, hours worked per week, and vacation days taken.
— The Online Citizen

Why the New US-Singapore Guam Fighter Training Detachment Pact Matters
The pact constitutes yet another boost for the U.S.-Singapore defense relationship in spite of wider challenges that remain for ties.
— The Diplomat

3 in 10 here have faced domestic abuse cases: Poll
Domestic abuse could be far more widespread than first thought, according to a new survey out yesterday.
— Straits Times (annoying popups)

‘Under one umbrella’: New Singapore food institute to deliver unified approach to product innovation and market entry
Singapore’s major food research entities will be consolidated under a new institute by the second quarter of 2020, enabling F&B firms large and small to access a ‘one-stop shop’ of research and information pertaining to food safety, regulations and innovation.
— Food Navigator-Asia

Singapore’s Food Security Seen at Heavy Risk From Climate Change
Singapore, home to some of the planet’s most affluent people, shouldn’t have to worry about going hungry — except when you factor in the threat of climate change.
— Bloomberg

GDP 2.0 measures growth democratically
ABHIJIT Banerjee and Esther Duflo, two of this year’s recipients of the Nobel Memorial Prize in economic sciences, are the latest among leading economists to remind us that gross domestic product (GDP) is an imperfect measure of human welfare.
— The Business Times

Singapore’s Property Glut Could Take Years to Clear
Singapore has a property glut that could take years to clear, threatening to kill a nascent price recovery amid an already uncertain economic outlook.
— Bloomberg

There Is More Upside Ahead for Markets: Bank of Singapore’s Lee
Eli Lee, head of investment strategy at Bank of Singapore, discusses the possibility of U.S. tariffs on China taking effect on Dec. 15 and what it would mean for markets. He speaks on “Bloomberg Markets: Asia.
— Bloomberg

Without patriotism, there can be no good governance in Singapore
There are obvious discrepancies in some of our Free Trade Agreements “FTAs” that are detrimental to the well being of Singaporeans.
— The Online Citizen

Future Serangoon polyclinic to be located opposite NEX mall
Residents who live around NEX shopping mall and Serangoon MRT station will be within walking distance of Singapore’s largest polyclinic when it opens in 2025.
— Channel NewsAsia (very annoying popups)

Singapore shares buck regional trend on Monday, STI down 0.5%
ON Monday, investors in Asia had to process mixed newsflows from the weekend, such as last Friday’s unexpectedly strong US jobs report and Sunday’s poor Chinese export figures.
— The Business Times

Singapore stock watch: Forise CEO resigns after just 4 months over pay
The following companies saw new developments that may affect trading of their securities on Monday (Dec 9)
— The Straits Times

There Have Never Been So Many Tourists Coming to Singapore
A year ago “Crazy Rich Asians” drove a surge of tourists to Singapore.
— Bloomberg

How spacetech is soaring in Singapore
The city is already home to 30 firms that are taking advantage of its spacetech advancements.
— Singapore Business Review

‘No-nonsense’ training from 7.30am to 1am: New book reveals how Israel helped Singapore establish SAF
Singapore’s first batch of officer cadets had to wake up at 5.30am, begin training at 7.30am and end their day only at 1am.
— Channel NewsAsia (very annoying popups)

Retired banker suggests that the proposed expected long-term real returns on government assets to be approved by Parliament instead of the President
On Facebook today (9 October), retired banker Chris Kuan shared a Straits Times article about President Halimah being briefed by GIC, MAS and Temasek on projected investment returns, a process which she described as “an important one within our annual Budget cycle”.
— The Online Citizen

President Halimah to review Government’s proposed expected long-term real returns, in consultation with the CPA
In a Facebook posting on Sunday (8 December), President Halimah Yacob said that she has been briefed by Deputy Prime Minister Heng Swee Keat and officials from the Ministry of Finance (MOF) on “Government’s proposed expected long-term real returns on its assets”.
— The Online Citizen

George Yeo: LKY only agreed to visit Israel in 1994, his first & only time, after Oslo Accord
The former foreign minister shared an anecdote about Singapore and Israel’s deep ties at a book launch commemorating 50 years of diplomatic ties.
— Mothership

Online users question CNA for failing to mention that the foreigner in anti-CECA rally was actually a tourist
It was reported in an article by the Channel News Asia (CNA) that police are investigating activist and founder of Transitioning.org (a support site for the unemployed) following a report that a foreigner participated in an anti-CECA rally that he organised last month.
— The Online Citizen

Company fined S$2,000 for false labelling drink Durian Whisky when it contains only 18% alcohol, not 37%
Durian Whisky was launched in Singapore at the Yummy Food Expo on June 27.
— Mothership

Singapore Morning News For May 19