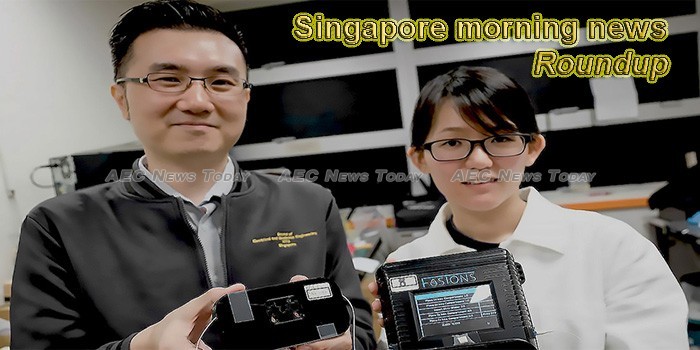 Singaporean blames social media for a lack of patriotic feeling among its citizens
A Singapore resident was lamenting on the current “sentiment” of many Singaporeans on how they look at their country and how they feel for the tiny-state.
— The Independent

Singapore in Talks With More Electric Car Companies After Dyson
Following Dyson Ltd.’s plans late last year to manufacture its first electric car in Singapore, the city-state is now in talks with other makers of green vehicles to set up shop on the island.
— Bloomberg

Can Singapore foster a coalition among opposition parties?
THERE seems to be a sense of cautious optimism at a coalition-building of opposition parties to take on the ruling People’s Action Party (PAP). Out of the 12 rival parties, the majority currently prefer to play low-key instead of formally beating their chests to announce what may well be the first-ever major alliance here.
— The Independent

Need for vigilance amid spike in dengue cases: Khor
There were three times as many dengue cases across Singapore in the first 31/2 months of this year compared with the same period last year, and the mosquito population remains high.
— Straits Times (annoying popups)

No reports of Singaporean casualties in Sri Lankan blasts: MFA
No Singaporeans were reported to be among those killed or hurt in the series of coordinated bombings that ripped across Sri Lanka on Easter Sunday (April 21), Singapore’s Ministry of Foreign Affairs (MFA) has confirmed.
— Today Online

Inside Jewel Changi Airport: An interactive special
Once the open-air car park of Terminal 1, the S$1.7 billion Jewel Changi Airport that rose in its place today connects three terminals and draws tens of thousands of visitors daily – not counting the travellers flying in and out of Singapore.
— CNA (very annoying popups)

Measles under control here, no sign of outbreak: MOH
Most of the 43 cases in the first 15 weeks of the year were single and sporadic local infections, except for five separate instances of transmission to a family member or close friend.
— Straits Times (annoying popups)

Why authentic Japanese cuisine and Singapore don’t easily mix: the story of Misato
Why continue a food and beverage (F&B) business when you have been incurring losses? Is passion enough to compensate for the venture? Owner and chef Tony Young explains why he does not plan on quitting on Misato, even amidst struggles and difficulties.
— The Independent

Why Kingsford, the developer that bought Normanton Park en bloc, is blocked from selling units
Within Singapore’s exclusive Sentosa Cove enclave is a two-storey house shaped like a grand piano, with a swimming pool on its roof, a living area that opens out to the waterfront, a black Rolls-Royce in the porch and a blue Bentley parked nearby.
— Today Online

Singapore SMBs most ‘digitally mature’ in region: Cisco
SMALL and medium businesses (SMB) in Singapore are the most digitally mature in the Asia-Pacific region, ahead of peers in countries such as Japan, Australia, and New Zealand, according to a new index by Cisco.
— The Business Times

Entrepreneurs, can you help make the Sentosa experience seamless for visitors?
Improving Sentosa’s transport infrastructure, having an integrated mobile application for all its attractions, and finding more ways to cater to visitors seeking nature and nostalgia.
— Today Online

NUS to convene review committee after undergrad calls for ‘justice’ against man who filmed her in shower
The National University of Singapore (NUS) said on Saturday (Apr 20) that it will convene a committee to review its current disciplinary and support frameworks, after a female undergraduate took to social media to call for tougher action against a student.
— CNA (very annoying popups)

SMI takes legal action against Hyflux; Maybank moves on Tuaspring
SM Investments (SMI) has terminated its rescue agreement with Hyflux, it announced on Friday. Hyflux, on its part, had already on April 4 terminated the same agreement with SMI.
— The Edge Singapore

2,000 fans turn up for Nas Daily’s meet-and-greet at Botanic Gardens
About 2,000 people turned up at the Singapore Botanic Gardens on Saturday (Apr 20) to see travel vlogger Nas Daily at his first meetup since moving to Singapore, according to estimates by Botanic Gardens.
— CNA (very annoying popups)

International Commission of Jurists urges SG govt not to pass Online Falsehood Bill without substantial amendments
The International Commission of Jurists (ICJ) has explicitly labelled Singapore’s Protection from Online Falsehoods and Manipulation Bill dubious and incompatible with worldwide legal principles as far as its present composition and structure is concerned.
— The Independent

9 restaurants in Singapore that prove our Indonesian food scene is more than just Ayam Penyet
With so many of us having friends and family in the Indonesian Archipelago, the locals don’t stand for watered down sop buntut (oxtail soup) or below-average tauhu, and it takes some real big bakso to serve up less-than-ideal chilli.
— Asia One

NUS students’ union condemns sexual harassment, urges students not to harass peeping tom
The executive committee of the National University of Singapore’s (NUS) students’ union said that it condemns any form of sexual harassment at the institution, but urged fellow students not to harass the male undergraduate who was caught filming a female student in the shower.
— Today Online

SM Investments terminates Hyflux rescue deal, both parties suing each other
On April 19 (Friday), Indonesia’s Salim-Medco consortium SM Investments (SMI) announced the termination of its plans, in “accordance with the terms of the restructuring agreement,” with Hyflux after the latter accused SMI of having breached their rescue deal.
— The Independent

SM Investments moves to terminate Hyflux rescue deal in ‘accordance with restructuring agreement terms’
Indonesia’s SM Investments on Friday (Apr 19) rejected accusations by Hyflux that it breached a rescue deal that both parties entered into, moving to terminate the plan in “accordance with the terms of the restructuring agreement”.
— Today Online

Right timing: STI’s upclimb supported by momentum and moving averages
There has been little change in the trend and chart pattern of the Straits Times Index.
— The Edge Singapore

Company in S’pore to stop working with NUS until male voyeur expelled
Company taking a public stand on this issue.
— Mothership

NUSSU Exco recognises that NUS takes sexual harassment very seriously and urges students not to harass perpetrator in case involving Ms Monica Baey
The executive-committee of the National University of Singapore Student Union (NUSSU Exco), has issued a statement to express its condemnation of any form of sexual harassment, which is a serious community problem that everyone has a responsibility in handling and its regret.
— The Online Citizen

Tired of the city? Here are some quick weekend getaway ideas
Singaporeans are known for their strict work ethic and resolute drive to succeed. Because of this, Singaporeans are also among the most sleep-deprived and stressed-out workers according to a recent survey.
— The Independent