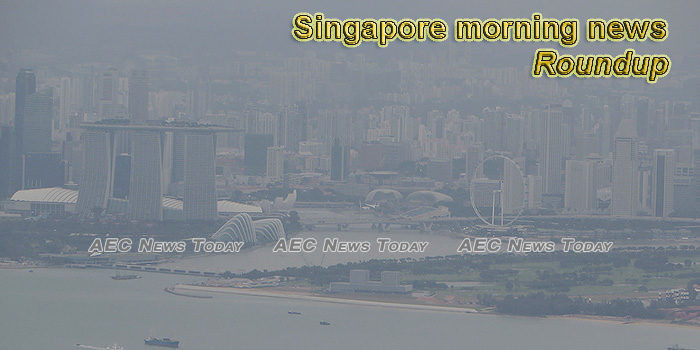 Electricity tariff to rise 3.5% in January-March to hit 5-year high
Household electricity tariffs will increase by an average of 3.5 per cent for January to March 2020, said utility SP Group on Monday (Dec 30), to hit a five year high.
— Channel NewsAsia (very annoying popups)

What’s new in 2020? 5 laws that kick in on Jan 1
When the clock strikes 12 on Tuesday night (Dec 31), Singapore will usher in 2020 with a flurry of fireworks and raucous celebrations.
— Channel NewsAsia (very annoying popups)

S’pore white-bellied sea eagle chases pair of Himalayan Griffon vultures away at Bukit Timah
Tis the season to be jolly for bird lovers as migratory birds make their visit to Singapore during this period, to refuel or escape from the cold winter.
— Mothership

Singapore-New Zealand upgraded economic agreement ratified, will come into effect on 1 Jan 2020
On 30 December (Monday), the Ministry of Trade and Industry (MTI) announced that the upgraded Agreement between New Zealand and Singapore on a Closer Economic Partnership (ANZSCEP) has been ratified by both countries.
— The Online Citizen

Singdollar holds steady despite year of ups and downs
Share markets and the global trading system were racked by volatility this year, but the Singapore dollar sailed serenely through the turmoil with little overall change against major currencies.
— Straits Times (annoying popups)

S’pore Netflix users to pay S$1 to S$3 more per month from Jan. 2020 due to price hike & GST
Come Jan. 9, 2020, Netflix users in Singapore will be paying an additional S$1 to S$3 per month, depending on their subscription plan.
— Mothership

HDB increases solar target, enough to power 135,000 four-room flats by 2030
Leading the charge to generate more clean energy in Singapore, the Housing & Development Board (HDB) plans to more than double its capacity for solar power by 2030.
— Straits Times (annoying popups)

Lucky Plaza accident: Mount Elizabeth Hospital not activated as it is not on SCDF’s list of medical providers, says CEO
The Mount Elizabeth Hospital’s 24-hour accident and emergency (A&E) department is open to all patients, regardless of who they are, and the hospital will dispatch staff to attend to emergencies via its ambulance service, said its chief executive Noel Yeo, in response to criticisms over the Lucky Plaza accident.
— Straits Times (annoying popups)

Warriors FC asked to sit out, club rejects decision
Singapore’s most successful football club is being asked to sit out the 2020 Singapore Premier League season.
— The Online Citizen

Life on Pulau Bukom: Pretty sunsets, a 3,000 sq ft home, and lots of fun
For some years, Singaporean Leng Ng Tai had this as his home address – A, 4A, Pulau Bukom.
— Channel NewsAsia (very annoying popups)

Old cab gets new life in rehabilitation of Tan Tock Seng Hospital patients
Caregivers also use it to learn to help those with mobility issues get into cars.
— Straits Times (annoying popups)

Emirates apologises to passenger after losing backseat of her wheelchair
Emirates has apologised to British passenger Gemma Quinn, 35, who was stranded in Singapore after the airlines misplaced part of her custom-made wheelchair on Christmas Eve (Dec 24).
— Straits Times (annoying popups)

S’porean in Zurich super excited to see jackfruit, sees S$250 price tag, no longer excited
“Exotic” fruits, such as durians or jackfruits, may be common to Singaporeans but they are quite a rare sight in Western countries.
— Mothership

Here’s why you should think twice before naming and shaming someone on social media
What would you do if you had an unhappy encounter in public? For some, they might opt to take to social media to name-and-shame those who have earned their ire.
— The Pride

3 more drivers sue SBS Transit in dispute over rest days and overtime pay
They are claiming that they were underpaid for overtime work and that they had to work for more than a week without a rest day.
— Straits Times (annoying popups)

BCA issues TOPs to Kingsford but URA says their projects failed to meet requirements
It was reported that a Chinese developer, Kingsford Huray, has been banned from selling condo units by Urban Redevelopment Authority (URA).
— The Online Citizen

PVP Chief comments on how Christmas retail in Changi Airport reflects the dreadful state of economy
People’s Voice Party chief, Lim Tean made a Facebook post on Friday (27 December 2019), commenting how the ongoing decline in retails sales at Changi Airport shows the sad state of Singapore’s economy.
— The Online Citizen

Woman motorcyclist, 30, sustains severe injuries from PIE collision, family looking for witnesses
She ended up with a fractured cheek, broken bones, and abrasions on the lower half of her face.
— Mothership

SMU student allegedly molested woman in campus study room
Lee Yan Ru is one of several tertiary students who have been hauled to court this year over alleged offences committed on campus.
— Straits Times (annoying popups)

Rowdy cab passenger jailed after hitting roof of taxi before striking driver
A taxi driver who picked up four passengers at Orchard Towers tried to stop their rowdy behaviour in his cab, but was hit in the face instead.
— Channel NewsAsia (very annoying popups)

Another PMD-related accident sends 6-year-old to hospital
A 17-year old riding a personal mobility device (PMD) was arrested on Sunday (29 December) morning after an accident with a six-year-old boy resulting in the boy being taken to the hospital.
— The Online Citizen