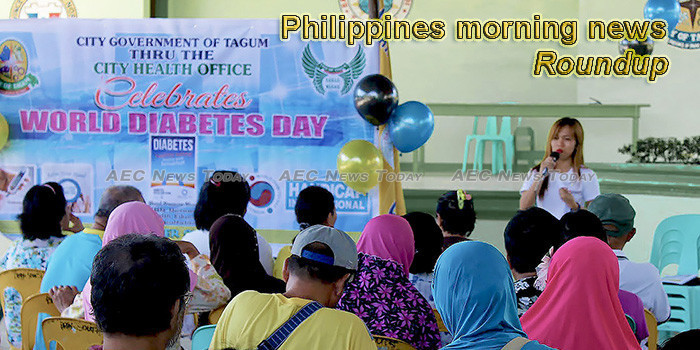 FDI inflows declined 40% to $4.5 billion in eight months
Net inflows of foreign direct investments fell 45 percent in August to $416 million from $758 million a year ago, as the uncertainty in the global environment continued to dampen investor sentiment, the Bangko Sentral ng Pilipinas said Monday.
— Manilastandard.net

Vaping in public now banned in Pasay City
The Pasay City government passed an ordinance prohibiting the use of vaping devices in enclosed public spaces.
— Rappler

Another possible typhoon this week as LPA enters Philippine area
THE LOW pressure area (LPA) east of Luzon has entered the Philippine area Monday afternoon, and weather bureau PAGASA said it could develop into a typhoon by today or tomorrow.
— BusinessWorld

Quake-affected people placed at 260,492
The number of families affected by the magnitude 6.6 and 6.5 earthquakes that rattled Tulunan, North Cotabato, on Oct. 29 and 31 has climbed to 53,362 or 260,492 people, the National Disaster Risk Reduction and Management Council said Monday.
— Manilastandard.net

Senate vows to keep strict timeline for P4.1-trillion budget bill for 2020
SENATE leaders are moving to avert a repeat of the 2019 budget standoff, a scenario that could happen next month if Congress fails to pass the Palace-proposed P4.1-trillion 2020 budget before lawmakers adjourn for their traditional yearend recess on December 20.
— Business Mirror

ASF legacy: Shrunken pork supply at end-2019
THE world will end 2019 with a smaller pork supply as China, the biggest consumer of pork, continues to grapple with the fatal African swine fever (ASF) while the disease spreads to meat-loving Southeast Asian countries like the Philippines, the United Nations’ Food and Agriculture Organization (FAO) said.
— Business Mirror

Disease may wipe out PHL banana farms–FAO study
GOVERNMENTS of banana-producing countries should intensify their interventions against the dreaded Fusarium wilt, which puts exporters like the Philippines at risk of losing thousands of hectares of plantations by 2028, the United Nations’ Food and Agriculture Organization (FAO) said.
— Business Mirror

Rediscount availments up two-fold in Jan-Oct
AVAILMENTS of the central bank’s peso rediscount facility rose by more than two times in the first 10 months of the year, which indicate that banks are lending more to clients, analysts said.
— Manila Times

PNP yet to purchase P300M worth of body cams despite allocation
The PNP has yet to buy body cameras despite the allocation of funds for their purchase in 2018, PNP officer in charge Archie Gamboa said on Monday.
— GMA Network

EcoWaste Coalition calls out illicit sale of banned cosmetics
With the 11.11 shopping bonanza getting underway on Monday, an environmental group urged online shopping platforms to initiate measures against the illicit sale of mercury-laced cosmetics banned by the health authorities.
— Manila Bulletin

PHL rice stocks grow 43% to 3-month high of 2.279 MMT
THE country’s total rice inventory as of October 1, expanded by 43.4 percent to a three-month high of 2.279 million metric tons (MMT) due to the increase in the stocks held by households, the Philippine Statistics Authority (PSA) said.
— Business Mirror

4.4-magnitude quake strikes off Isabela
A 4.4-magnitude earthquake struck off Isabela on Monday, Nov. 11. The Philippine Institute of Volcanology and Seismology said the quake, of tectonic origin, hit 26 kilometers southeast of Palanan at 8:28 a.m.
— Eagle News

Locsin to bar entry of Human Rights Watch officer
FOREIGN Affairs Secretary Teodoro Locsin Jr. on Monday said a Human Rights Watch (HRW) officer who pressed for the arrest of President Rodrigo Duterte will not be allowed to enter the Philippines.
— Manila Times

PH seriously considering safeguard duty on imported cars
The Philippine government is seriously evaluating the possibility of slapping safeguard duty on automobile imports in light of the surge in the importation of completely built-up (CBU) cars, which have caused injury to the domestic industry, and to protect of what is left of the local car manufacturing in the country.
— Manila Bulletin

Sotto: Pointless to ask for UN, US help in drug war
Senate President Vicente Sotto III on Monday said it might be pointless for the Philippines to ask for assistance from the United Nations and the United States in the fight against illegal drugs since they don’t know the drug problem in the country.
— Philippine News Agency

DOST hopes to open up 13K scholarship slots in 2020
Department of Science and Technology (DOST) Secretary Fortunato dela Pena on Monday said he is hoping to increase the agency’s scholars to at least 13,000 in 2020 after a big number of students took the scholarship exam last October.
— Philippine News Agency

Tacloban-based groups to aid Mindanao quake victims
Civic organizations and a party-list group based in this city have tied up for the “Balik-Bulig” (giving back) drive for the earthquake victims in Mindanao.
— Philippine News Agency

DTI, data scientists team up for AI road map
THE Department of Trade and Industry (DTI) said it is currently crafting the country’s artificial intelligence (AI) sector road map in a bid to adopt to the Fourth Industrial Revolution (4ID).
— Manila Times

Robredo discusses community-based rehab programs with UNODC reps
With 90 percent of drug dependents in the country classified as slight or occasional drug users, Vice President Leni Robredo–in her capacity as co-chair of the Inter-Agency Committee on Anti-Illegal Drugs–discussed how to improve community-based rehabilitation centers in her meeting with UN Office on Drugs and Crime (UNODC) representatives and other community-based advocacy groups.
— GMA Network

Indonesia’s Gojek to enter PH’s ride-hailing market
Makati City Rep. Luis Campos Jr. hailed on Sunday the entry of a new transport network company to restore competition and provide another option for commuters in the clogged streets of the capital.
— The Jakarta Post

Maranao royal insists PRRD has Maranao blood
A member of the Maranao royalty sought to disprove Monday a book that casts doubts on President Rodrigo Duterte’s bloodline, by hinting that the President does not have Maranao blood through his grand maternal lineage.
— Philippine News Agency

P’sinan city residents feast on pork dishes to allay ASF scare
Residents here have feasted on 13 lechon baboy (roasted pigs), pork barbeque and other pork viands, and slices of hotdog to show that this city is free from African swine fever (ASF) and to encourage people to consume pork products from other localities.
— Philippine News Agency

DOTr says MRT-7 almost 50 percent complete; target date of completion set at year 2022
The Metro Rail Transit Line 7 is now 49.22 percent complete. The Department of Transportation said so far, the required rolling stock of 108 cars have been completed, and are only awaiting shipment pending the availability of the holding area.
— Eagle News

Did Vice-President Leni Robredo just make a bad judgment?
In accepting the job of co-chair of the Inter-agency Committee on Anti-illegal Drugs (ICAD), Vice-President Leni Robredo said, “In the end, the most important consideration for me is simple: if this is the chance to stop the killings of the innocent and to bring to account those responsible, I will take upon this challenge.
— BusinessWorld

LIST: Chokepoint areas, affected roads during SEA Games 2019
The Metropolitan Manila Development Authority (MMDA) identified a number of chokepoint and roads which will be affected by the Southeast Asian (SEA) Games from November 30 to December 11.
— Rappler

Gift-giving, feeding sessions better than giving alms to beggars
The Department of Social Welfare and Development (DSWD) on Monday reiterated its appeal to the public to refrain from giving alms to children in the streets.
— Philippine News Agency

DA promotes value-adding for higher income to farmers
Beyond production, farmers should also go into value-adding, the new direction in agriculture. This was highlighted during the Farmers’ Field Day at the Department of Agriculture (DA) – Caraga’s Trento Research Experiment Station (RES) in Agusan del Sur, which focused on Mushroom production.
— Philippine Information Agency