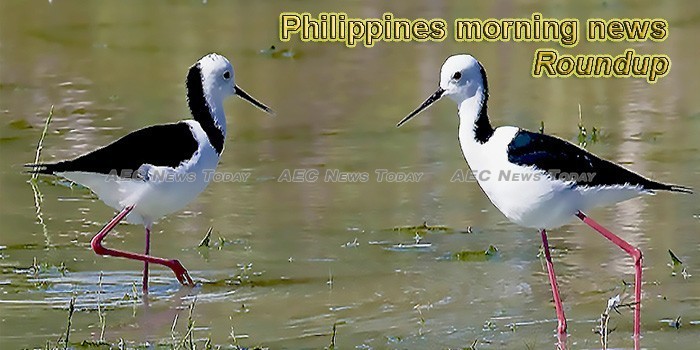 Investment pledges surged 47% to P286.7b in 4 months
Investment pledges jumped 46.5 percent in the first four months to P286.7 billion from P195.7 billion a year ago on the back of a significant increase in foreign projects, the Board of Investments said over the weekend.
— Manilastandard.net

Foreign tourist arrivals up 7.6% to 2.2 million in Q1
The government is on track to meet its tourist arrival targets this year, with the number of visitors from January to March growing by 7.59 percent compared to the same period in 2018, according to figures released by the government yesterday.
— The Philippine Star

PH needs to improve airports to boost tourism industry
The Philippines should improve its airports and make it at par with international standards in order to further boost its tourism industry.
— Manila Bulletin

Govt to limit tourist numbers to carrying capacity of sites
The President wants to limit the number of tourists visiting the country’s major destinations to ensure that environmental and local laws are followed, according to the Department of Tourism (DOT).
— Business Mirror

RRR could be cut should inflation slow
INFLATION likely slowed in April as food prices continued to drop, analysts said, even as they were divided on the central bank’s next policy move, with some expecting a steady stance despite room to ease and a cut in banks’ reserve requirement ratio (RRR) instead.
— BusinessWorld Online

Supreme Court orders COA to release P747.1 million to retired DBP employees
THE 141 retired employees of the Development Bank of the Philippines (DBP) can now enjoy their retirement years after the Supreme Court ordered the release of P747.17 million representing their retirement benefits, which was earlier nullified by the Commission on Audit (COA).
— Business Mirror

SC issues writ of kalikasan on West Philippine Sea
THE Supreme Court granted a petition last month by the Integrated Bar of the Philippines (IBP) and fisherfolk groups, issuing a Writ of Kalikasan for the protection and preservation of three shoals within the country’s territory in the West Philippine Sea (WPS).
— BusinessWorld Online

DOT upbeat on 8.2M visitors’ goal
With over 2 million tourist arrivals nationwide in the first quarter of the year, the Department of Tourism (DOT) remains confident that will be able to hit its target of 8.2 million visitors this year.
— Business Mirror

Changes seen in PHL move to UMIC status
The Philippines believes it will “graduate” to upper middle income country (UMIC) status this year, sooner than expected, and this will likely result in “changes” in its financing efforts, according to the country statement submitted to the Asian Development Bank (ADB) Board of Governors.
— Business Mirror

DOLE looks into PHL’s return to national minimum wage
Efforts to revert to setting a national minimum wage are now in the initial stage, as the Department of Labor and Employment (DOLE) said a review of existing wage policy of the Philippines is ongoing.
— Business Mirror

BIR sets 5-year strategic plan
The Bureau of Internal Revenue (BIR) has prescribed its Strategic Plan for 2019-2023, after posting strong collection performances in the first two years of the administration’s term.
— Malaya

‘Brace for NPA attacks ahead of polls’
Military and police forces in Bicol region and Mindoro province on Sunday rolled out their election security plans amid possible attacks from the New People’s Army.
— Manilastandard.net

Mindanao railway construction pushed to Q4 due to alignment issues
Construction of the Mindanao Railway System (MRS) has been moved to the fourth quarter this year as the government reviews the alignment in Davao City following resistance from affected homeowners.
— BusinessWorld Online

CDC declares P2 billion dividends in past 3 years
For the past three years, Clark Development Corporation (CDC) has declared P2.016 billion which represents half of the total remittances by the state-owned firm to the Bureau of the Treasury in its 25-year existence.
— Manila Bulletin

Goods trade up 10.5% amid large deficit with top partner China; electronics still top export
INTERNATIONAL trade in goods in 2018 totaled $182.15, up 10.5%, the Philippine Statistics Authority (PSA) said, with China, the top trading partner, accounting for 16.9% of total trade while enjoying a large surplus vis-a-vis the Philippines with exports of $22.01 billion and imports of $8.82 billion.
— BusinessWorld Online

PHL-France sign tourism cooperation agreement
FRANCE AND the Philippines have signed an agreement to strengthen tourism ties and increase the flow of visitors both ways.
— BusinessWorld Online

Aviation exec mulls reviving luggage tag system in airports
The management of the Laguindingan Airport in Laguindingan, Misamis Oriental is considering on recommending to airline operators the revival of luggage tagging after the bag of a Cebu Pacific passenger went missing for a few days, which Civil Aviation Authority of the Philippines (CAAP-10) in Northern Mindanao called as “mischance.”
— Philippine News Agency

Book on Martial Law launched: ‘It is happening again’
Seeing similarities between the present and the Philippines’ dark days under military rule, Martial Law survivors launched a book documenting their experiences to remind Filipinos about their past.
— Rappler

Mindanao Railway construction to start this year
Homeowners at the Monteritz village are complaining about the railway project that will hit their homes.
— Philippine Information Agency

Army: 7 hurt in rebel attack in Camarines Sur
At least seven people, including a soldier and two militiamen, were wounded in an attack by suspected New People’s Army (NPA) members on Saturday in a remote village of Libmanan town in Camarines Sur province, the military said Sunday.
— Inquirer.net

TUCP to file wage hike petitions in 3 regions
The Trade Union Congress of the Philippine (TUCP will file three other petitions to increase the minimum wage — this time in Central Luzon, Central Visayas, and Calabarzon.
— Inquirer.net

TGI partners with Chinese firm for various Internet services in PHL
ZAMORA-LED Tranzen Group Inc. (TGI), a leading diversified conglomerate in the country, has struck a partnership deal with a Chinese firm to roll out Wi-fi Internet, digital television and satellite network services in the Philippines.
— Business Mirror

Hospital for OFWs to cost over P500M
THE FIRST hospital for Overseas Filipino Workers (OFWs) will cost more than half a billion pesos and is targeted to open by 2020 in Pampanga, according to the Department of Labor and Employment (DoLE).
— BusinessWorld Online

Ombudsman orders PAO chief to answer graft charges
The Office of the Ombudsman has given due course to a complaint filed against Public Attorney’s Office chief Persida Acosta and Dr. Erwin Erfe for malversation of public funds, falsification of public medical documents, grave misconduct, and abuse of authority.
— Manilastandard.net

QC teachers open hotline to protect poll servers
A hotline against harassment, threats and other concerns was activated on Sunday by the Quezon City Public School Teachers Association (QCPSTA) for the protection of its members who will serve in the May 13 elections.
— Inquirer.net

Poll sees muted 1st quarter GDP growth on 2019 budget delay
ECONOMISTS expect gross domestic product (GDP) growth in the first quarter to be weighed down primarily by the impact of the delayed enactment of the 2019 national budget despite household spending and private sector investment picking up, according to results of a BusinessWorld poll.
— BusinessWorld Online

BSP to take measured policy steps — S&P
THE PHILIPPINE ECONOMY is not overheating, but this does not mean the central bank will dial back the cumulative 175-basis-point interest rate hike it fired off last year to ease inflation pressures.
— BusinessWorld Online

ERC’s competitive selection rules expected in 30 days
THE Energy Regulatory Commission (ERC) expects to issue within 30 days its final rules on competitive selection process (CSP), a scheme that chooses the lowest-cost power for consumers, including a provision on replacement power that will require the generation companies to shoulder the cost of …
— BusinessWorld Online

DOST supports Halal thru R&D
The Department of Science and Technology (DOST) is supporting the halal industry in the country through their research and development (R&D) programs.
— Philippine Information Agency

P78-M needed to haul garbage into Korean vessel: BOC
The Bureau of Customs (BOC) in the Mindanao International Container Terminal (MICT) District port on Friday reported that the Ministry of Environment in South Korea is now willing to have the 50,000 tons of garbage dumped at Phivedec Industrial Estate premises in Tagoloan, Misamis Oriental Province shipped back to their country.
— Philippine News Agency

Opposition bets fret over Namfrel’s pullout as citizens’ arm of Comelec
Opposition senatorial candidates on Sunday expressed concern over the National Citizen’s Movement for Free Elections’ move to decline its accreditation as the citizens’ arm of the Commission on Elections in the May polls.
— GMA News

CIDG probes politician’s link to seized firearms in Lanao Norte
Authorities are now investigating if a politician is the real owner of firearms and ammunition stashed inside a house rented by a woman in Lanao del Norte on Friday.
— Philippine News Agency

Farmers’ group leader claims strafing of house poll-related
A farmers’ group leader here has claimed the strafing incident at her house in a mountain village of Sudlon 1 by unidentified men last Saturday night was meant to harass her in relation to the May 13 election.
— Philippine News Agency

Palace: No “gov’t inaction” as claimed in Panganiban Reef, Ayungin and Scarborough Shoals
The Palace on Saturday, May 4, denied there was “government inaction” with respect to the implementation of environmental laws in Philippine areas that are also being claimed by China.
— Eagle News

Trillanes tells Duterte: You aren’t paid to watch Netflix
Senator Antonio Trillanes IV on Sunday criticized President Rodrigo Duterte for watching Netflix at home after the public missed him at work for a week.
— GMA News

Owner of spa offering ‘extra services’ held
The National Capital Region Police Office on Saturday arrested the owner of a massage spa which allegedly offers “all the way sex” services to its customers and saved two of its employees in an entrapment and rescue operation in Sta. Mesa, Manila. Police Major Gen.
— Tempo

MYDev: Helping Mindanao youth realize their potential
Living in the strife-torn Indanan, Sulu without educational plans to back up her future, 20-year-old Marshaida Hamid, at one point, almost lost hope she would be able to lift her family from poverty.
— Philippine News Agency

Pangilinan frets over OAV delays, says DFA’s fund woes trivial
Senator Francis Kiko Pangilinan on Saturday expressed dismay over delays in the delivery of ballots for the overseas absentee voting in some countries, saying the Department of Foreign Affairs’ concerns about funds for the stamps was a minor problem that could be addressed immediately.
— GMA News