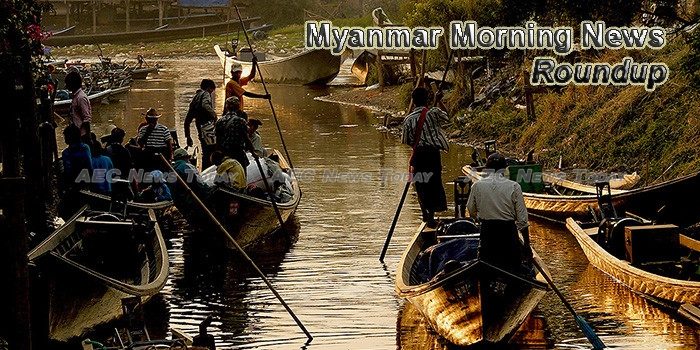 Over US$1.7bn worth of fuel imported in eight months
Myanmar imported fuel worth more than US$1.7 billion within the first eight months of this fiscal year (2017-2018), exceeding more than half of the amount in the same period last year, according to the Ministry of Commerce.
— Eleven Myanmar

Myanmar’s largest oil refinery project cancelled
Construction of a multi-billion-dollar oil refinery in the south of Dawei has been cancelled after an investor in the project ran into financial constraints, sources confirmed.
— Myanmar Times

Myanmar opium crop shrinks by a quarter
The area under opium poppy cultivation in Myanmar has shrunk by a quarter in the last two years, a UN study said on Wednesday (Dec 6), as demand for opiates eases and methamphetamine use surges.
— Channel News Asia

House Calls for Sanctions on Myanmar Security Forces
The House has called on President Donald Trump to impose sanctions on members of Myanmar’s military and security forces following a deadly crackdown that forced more than 600,000 Rohingya (ROH’-hihn-jah) Muslims to flee to Bangladesh.
— US News

Why the Rohingya Can’t Yet Return to Myanmar
On Nov. 23, the governments of Myanmar and Bangladesh signed an agreement to return the Rohingya refugees — more than 600,000 people who escaped from Rakhine state in western Myanmar to Cox’s Bazar in Bangladesh — after ethnic cleansing carried out by Myanmar’s armed forces since August.
— The New York Times

Myanmar to approve five specialised banks for targeted lending
The Central Bank of Myanmar (CBM) will approve the forming of five sector-specific banks, according to a directive from the President’s Office to the central bank.
— Myanmar Times

Myanmar investment development forum kicks off in Yangon
Myanmar Investment and Development Forum kicked off here on Wednesday, aimed at sharing the investment opportunities in the country.
— Xinhua Net

Yangon proposes K212 billion interim budget for April-September 2018
A budget of K212 billion has been proposed for Yangon for the period between April 1 and September 30 next year.
— Myanmar Times

IFC, Myanmar introduce ag guidelines and protocol
The International Finance Corp. (IFC) has partnered with the Department of Agriculture of Myanmar’s Ministry of Agriculture, Livestock and Irrigation (MoALI) to introduce guidelines geared toward improving the productivity and profitability of farmers through sustainable farming.
— World Grain

Myanmar Ministry permits onion imports
According to U Khin Maung Lwin, assistant secretary of Ministry of Commerce, the Ministry will now allow onions to be imported.
— Fresh Plaza

Bomb-making Materials Found in Village in Myanmar’s Maungdaw Township
.Authorities in Myanmar’s violence-wracked Maungdaw township have determined that materials found by a group of girls near a deserted Muslim village were intended for making explosive devices, a local official said on Wednesday.
— Radio Free Asia

Myanmar media development conference to focus on safety
‘Defending Journalism’, a new global study by International Media Support analyses the efforts to safeguard journalists in seven countries where environments of conflict and instability challenge the ability of journalists to produce good, in-depth journalism. The study will be launched at this year’s Media Development Conference in Yangon.
— IMS