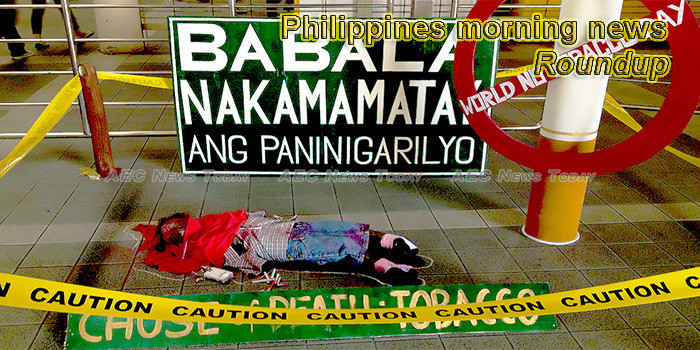 NG debt hits P7.79T as of April
The national government’s outstanding debt stood at P7.79 trillion as of end-April 2019, 13.3 percent up from its year ago level due to higher domestic and foreign loans.
— Malaya

PHL digital economy to expand 12-fold to P1.9 trillion in 2030–Hinrich
The country’s digital economy could expand 12-fold to P1.9 trillion by 2030 if the government would hike investments in information and communications technology (ICT), and ease border frictions to facilitate greater trade within the Asia-Pacific region, according to the Hinrich Foundation (HF).
— Business Mirror

Tax reform to jack up production cost by 80%
With over a billion dollars in potential investments foregone the past year and a half due to the uncertainties brought about by the proposed tax reform, players in the country’s top exporters face as much as 80 percent increase in production cost should they be subjected to corporate income tax (CIT) under that plan.
— Malaya

Duterte: I don’t care how many will die in war on drugs
Speaking before the Filipino community in Tokyo, Duterte said, I don’t give a shit kung ilan kayo diyang namatay.
— GMA News

Canada takes trash back
Canada is finally taking back tons of garbage shipped to the Philippines, with a chartered vessel having arrived Thursday afternoon to receive 69 containers in the custody of Subic Bay International Terminal Corp. (SBITC).
— The Manila Times

ICC studying Morales, Del Rosario complaint vs China’s Xi
The Office of the Prosecutor of the International Criminal Court (ICC) is analyzing if it has jurisdiction over the communication filed by two former Philippine officials against Chinese President Xi Jinping, said their lawyer who delivered the complaint to the Hague-based court.
— CNN Philippines

Solon says Canadian trash could’ve been used as ‘kicker’ to smuggle illegal drugs to PHL
A lawmaker on Thursday expressed fear that the trash illegally shipped to the Philippines from Canada years ago could have been just a cover to smuggle contraband such as illegal drugs to the country.
— GMA News

Income inequality widening amid strong economic growth
THE regional disparity in wealth has widened throughout the years, mitigated only by high levels of overall economic growth and a trend towards reduced poverty, the National Economic and Development Authority (NEDA) said Thursday.
— BusinessWorld Online

NCR consumers biggest spenders in 2018–PSA
METRO Manila residents spent the most on consumer goods and services in 2018, according to the latest data released by the Philippine Statistics Authority (PSA) on Thursday.
— Business Mirror

Youth group decries frozen SK funds
A youth sector party list group on Thursday deplored the delay in the release of funds to Sangguniang Kabataan (SK) organizations in the country, reportedly due to the failure of agencies to craft the guidelines for fund releases.
— — Inquirer.net

Access Bangsamoro launched to provide online platform for BARMM discussions
THE ACCESS Bangsamoro Website (accessbangsamoro.ph) was launched Thursday (May 30) “to promote the free flow of information, analysis, and discussions” relating to the Bangsamoro Organic Law (BOL) and the transition into the new Bangsamoro Autonomous Region in Muslim Mindanao (BARMM).
— BusinessWorld Online

OCD spent only P10k of P36M in donations for Marawi victims –COA
The Commission on Audit (COA) has called out the Office of Civil Defense (OCD) for spending in 2018 only P10,000 out of the P36.92 million donation for victims of the five-month long siege of Marawi City in 2017.
— GMA News

US allows imports of young coconuts from PH
The United States (US) will now allow the entry of young coconuts coming from the Philippines, following a bilateral meeting held between the two countries last week as well as the request made by the Department of Agriculture (DA) in 2017.
— Manila Bulletin

Agriculture under pressure to contribute more to growth
THE Department of Agriculture (DA) said it will step up its seed and fertilizer distribution and support the poultry industry to help the government catch up on its spending, after the delay in the 2019 budget dampened economic growth during the first quarter, as pressure from elsewhere in the government mounted on the DA to pull agriculture out of its 10-year spell of weak growth.
— BusinessWorld Online

Guevarra says criminal raps to be pursued vs private importers even as Canada recalls trash today, May 30
Criminal charges will be pursued against the private importers of the trash from Canada that had been languishing in the Philippines for years. Justice Secretary Menardo Guevarra, who was also designated the caretaker of the government while President Rodrigo Duterte is on a working visit to …
— Eagle News

PECO says expropriation hearings ‘premature’ without ruling on MORE Power’s franchise
ILOILO CITY’S power distributor, Panay Electric Company, Inc. (PECO), said it would be “premature” for the Iloilo Regional Trial Court (RTC) to proceed with the hearings on the expropriation of its assets by its competitor, MORE Electric and Power Corp. (MORE Power), without a …
— BusinessWorld Online

Dino eyes monorail system for Metro Cebu
The top presidential aide for the Visayas on Thursday said he welcomes the proposal of a Davao-based firm to construct a monorail system, instead of a Light Rail Transit (LRT) system, for Metro Cebu.Secretary Michael Lloyd Dino, chief of the Office of the Presidential Assistant for the …
— Philippine News Agency

Security, Fire, and Safety Experts to Gather at IFSEC Philippines
The 3-day seminars and conferences of IFSEC Philippines will present the hottest topics and the latest news in the security, fire, and safety industry from 13 – 15 June, 2019 at the SMX Convention Center.
— AEC News Today PR Newswire (media release)

84 kilos of meat from Japan seized at NAIA
A shipment of imported meat from Japan that was brought into the country with no clearance and health certificate was recently intercepted at the Ninoy Aquino International Airport.
— Tempo

Speakership race crucial to PRRD’s legislative agenda
The race for the House speakership is crucial in pushing for the legislative agenda of President Rodrigo R. Duterte, specifically on tax reform and federalism, a political analyst said on Wednesday.
— Philippine News Agency

AFP to deploy 1st Brigade Combat Team in Sulu for anti-ASG ops
The military will deploy the 1st Brigade Combat Team (1BCT) to Sulu in line with ongoing efforts to neutralize the Abu Sayyaf Group (ASG) terrorists.”Now that the election period is over and national candidates have been proclaimed, we are redeploying forces to security challenged areas …
— Philippine News Agency

NFA to focus on palay buffer stocking
With Republic Act 11203 or the Rice Liberalization Law already in place, the National Food Authority (NFA) will now focus on its primary function as defined by this law to concentrate on buffer stocking of palay for utilization in times of calamities.
— Philippine Information Agency

Children at risk from overexposure to technology – PNP
Screen or gadgets dependency and easy access to internet were the top reasons for children involved in rape cases.
— Philippine Information Agency

Duterte allows PNOC-EC to enter into third-party contracts
In line with the government’s goal to attain energy independence, President Duterte has allowed the Philippine National Oil Co.-Exploration Corp. to forge farm-in and farm-out agreements with third parties for oil and gas exploration and development in the country.
— Tempo

DA: No pork price hike seen amid ASF spread
THE Department of Agriculture (DA) assured consumers on Wednesday that “there should be no increase” in pork prices, citing local hog raisers’ capability to meet domestic demand amid the spread of African Swine Fever (ASF) in China, Southeast Asia and beyond.
— The Manila Times

Indonesia morning news for May 2