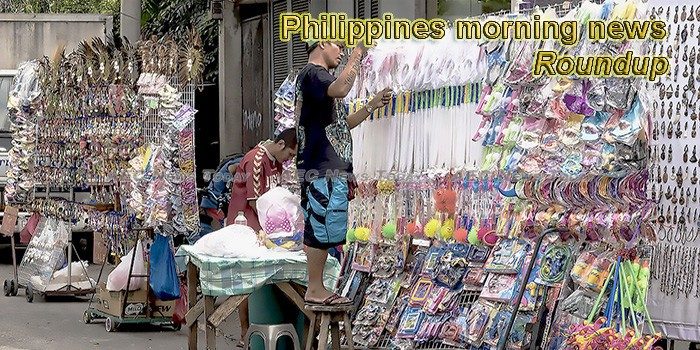 Duterte fails to break budget impasse
Not even a meeting with President Duterte could break the impasse among lawmakers over this year’s stalled budget program.
— The Philippine Star

El Niño wreaking havoc in the Philippines
El Niño is parching farms and drying up water supplies in the Philippines, with the southern island of Mindanao taking the brunt of the irregular weather pattern that causes sudden drought-like conditions.
— Asia Times

DUTERTE THROWS OUT DECADE-LONG FIGHT FOR THE INTERNATIONAL CRIMINAL COURT
The Philippines’ withdrawal from the International Criminal Court (ICC) takes effect on Sunday, March 17, 2019, throwing out a long struggle that took 11 years.
— Rappler

PH to file complaint before EU, Belgium on funding CPP fronts
The Philippine government is set to file a formal complaint before Belgium and the European Union (EU), which will also request them to stop funding alleged fronts of the Communist Party of the Philippines-New People’s Army (CPP-NPA) once it has gathered more proof.
— Philippine News Agency

Neda: Reenacted budget to stall infrastructure projects, cut GDP growth this year
A REENACTED budget will likely result in the lowest GDP growth rate that the Philippines will see in nearly a decade as it would hamper jobs creation and the implementation of publicly funded projects.
— Business Mirror

Rappler may face anti-dummy raps
Online news outfit Rappler may be up for yet another case in court.
— The Philippine Star

EO due on water crisis; hospital supply safeguarded
A PALACE official said the government is drafting an executive order (EO) to address the water crisis by rationalizing inefficient water management practices which had been flagged by economic planners, as continued shortages in parts of the capital entered their second week, forcing the authorities to prioritize critical users like hospitals.
— BusinessWorld Online

Duterte gives P1.5-M reward for Manila drug operatives
President Duterte said he will give P1.5 million to agents of the Philippine Drug Enforcement Agency (PDEA) following the drug operation in Manila which led to the death of a businessman Monday.
— Manila Bulletin

Imports surge hits clear float glass; government probing, eyeing safeguard duty
FOLLOWING the imposition of a safeguard duty on cement, the government is now eyeing to protect the float glass industry after it reportedly got hit by a surge in imports from 2013 to 2017.
— Business Mirror

Rice, corn inventory expanded in February—PSA report
The country’s rice inventory in February went up by 19.24 percent to 2.141 million metric tons, from 1.795 MMT recorded in the same period last year, according to the Philippine Statistics Authority (PSA).
— Business Mirror

PH’s mining industry faces fin’l crisis with tax proposal
The country’s mining sector will be in serious financial trouble once the government imposes a tax regime currently being pushed for by the Department of Finance (DOF), which could lead to the industry’s eventual downturn.
— Manila Bulletin

Filipina migrant workers still ‘top export’
Emer de Lina, 59, expected that when she returned to the Philippines, there would be improved roads and basic services as well as reasonably stable prices for necessities.
— UCA News

EU funding for Philippine NGOs put on hold over alleged communist ties
The European Union asked the Duterte administration to present evidence proving that some groups that receive funds from its member countries have ties to the communist rebellion, a military official said Wednesday.
— The Philippine Star

Car sales in Feb 2019 up 0.6%
Vehicle sales in February this year slightly improved by 0.6 percent to 26,327 units compared to the 26,176-unit sales in the same month in 2018, the Chamber of Automotive Manufacturers of the Philippines, Inc. (CAMPI) reported Wednesday.
— Philippine News Agency

PHL can’t block Huawei without scientific evidence — DICT official
Despite cybersecurity issues hounding Huawei, the Philippines will have to secure concrete evidence of possible threats before blocking the Chinese information and communications technology giant in the country.
— GMA News

A few days before PHL exit, Duterte says he’s ready to face death sentence from ICC
President Rodrigo Duterte again expressed readiness to face a death sentence should the International Criminal Court (ICC) find him guilty of crimes against humanity in connection with his war on drugs.
— GMA News

DoF sees 2018 FDI slump as temporary
THE Department of Finance (DoF) said the 4.4% drop in foreign direct investment (FDI) net inflows in 2018 is temporary due to uncertain global economic conditions, with the Philippines poised to implement reforms that will improve the investment environment.
— BusinessWorld Online

Air Force: No approval yet for cloud seeding to address water shortage
The Philippine Air Force will not be starting cloud seeding operations any time soon, because it does not yet have approval from the Armed Forces of the Philippines.
— GMA News

12 BIFF men killed in AFP Maguindanao offensive
At least 12 members of the Bangsamoro Islamic Freedom Fighters (BIFF) were confirmed killed in air and ground assaults launched by the military in this province since Sunday.
— The Philippine Star

P1.6-million bounty up on arrest of Cebu girl’s killer
A P1.6-million cash reward awaits anyone who can give information that will lead to the arrest of the killers of 16-year-old church collector Christine Lee Silawan.
— Manilastandard.net

PDEA agents in slay of party drug dealer Pasion to get cash reward –Duterte
President Rodrigo Duterte on Wednesday said he would give cash rewards to agents of the Philippine Drug Enforcement Agency (PDEA) following the killing of a supplier of party drugs in a buy-bust operation on Monday.
— GMA News

US Navy’s ‘finest ship’ docks in Manila with more than 100 Fil-Am crew members
The USS Blue Ridge, considered as the finest ship of the United States Navy and the most technologically advanced among its fleet, docked in Manila on Wednesday for another port visit.
— GMA News

Duterte to fire more officials for corruption
President Rodrigo Duterte on Wednesday said he would fire “another set of officials,” as he decried anew corruption and red tape in government.
— The Manila Times

The long, hot summer
Based on information on the website of the Metropolitan Waterworks and Sewerage System (MWSS), the main sources of Metro Manila’s water supply are the Angat, Ipo, and La Mesa Dams.
— BusinessWorld Online

DepEd-11 denies banning ACT members as poll BEIs
The Department of Education-Region 11 (DepEd-11)-brushed aside allegations of the Association of Concerned Teachers (ACT) that it has banned the group’s members from performing election duties.
— Philippine News Agency

NEDA won’t back DA plans to ban palay imports
THE National Economic and Development Authority (NEDA) said it cannot rule out imports of palay, or unmilled rice, by the private sector, after the Department of Agroculture (DA) signalled that it will not allow the practice because of the potential that the shipments might bring in pests or …
— BusinessWorld Online

Open-pit mining investment could have shored up weak FDI, think tank says
AN independent think-tank said investment frozen by the open-pit mining ban could have sustained the Philippines through the recent drop in Foreign Direct Investment (FDI), which fell 4.4% in 2018.
— BusinessWorld Online

MWSS criticizes Manila Water for unfinished Cardona treatment plant
An official of Metropolitan Waterworks and Sewerage System (MWSS) said that the severity of the water shortage in the east zone concession area serviced by Manila Water Co.is due to the company’s water treatment plant in Cardona, Rizal still being unfinished.
— GMA News