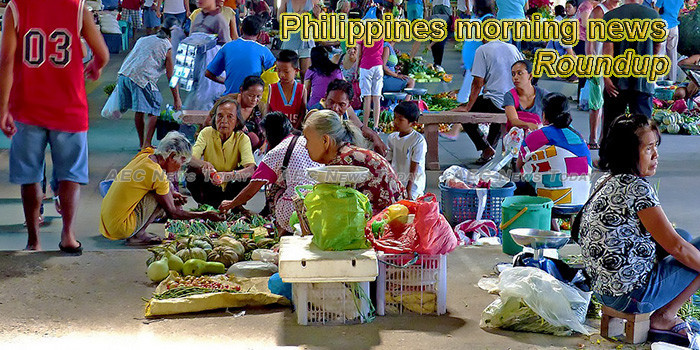 National Government borrowings reach P661 billion in Jan-April
The national government’s borrowings almost tripled to P661.52 billion in the first four months, with the administration continuing to rely more heavily on domestic lenders, the Bureau of the Treasury (BTr) reported.
— The Philippine Star

96 immigration intelligence men shuffled at Naia
THE Bureau of Immigration (BI) said on Sunday it has shuffled nearly a hundred of its intelligence officers assigned at the Ninoy Aquino International Airport (Naia) as part of measures to prevent corruption at the airports.
— Business Mirror

Philippines calls for ‘upgrade of worker skills’ in ASEAN
President Rodrigo Duterte on Saturday, June 22, called for the upgrading of the skills of the workforce in member-countries of the Association of Southeast Asian Nations (ASEAN), in support of the 4th Industrial Revolution.
— Rappler

House members agree on Oct budget deadline to give Senate enough time
MEMBERS of the 18th Congress have reached a consensus to pass the 2020 national budget by October to ensure that it will be transmitted to President Duterte before the year ends, a lawmaker said on Sunday.
— Business Mirror

Duterte pushes Asean cooperation in economic develpoment
Greater cooperation on inclusive, equitable and sustainable economic development as well as promoting the rights of migrant workers and other vulnerable groups were among President Duterte’s principal concerns in his talks with his counterparts and business leaders at the 34th Association of Southeast Asian Nations (ASEAN) Summit here this weekend.
— The Philippine Star

Customs probe on POM smuggling finished
Officials of the Bureau of Customs (BOC), including a former district collector at the Port of Manila (POM), are in hot water for alleged technical smuggling, which resulted in revenue losses for the government.
— The Philippine Star

EU pushes anew lifting of foreign equity curbs
The ambassador of the Europeran Union batted anew for the removal of the restriction on foreign ownership in order to rev up the economy, and gave assurances that the EU would be generally “happy” to work out strategies to stimulate new and more economic activities for Mindanao.
— Business Mirror

Net ‘hot money’ outflows surge to $750M in May
FOREIGN portfolio investments remained in the negative territory in May, recording the biggest net outflow in more than two years, data from the Bangko Sentral ng Pilipinas (BSP) showed on Friday.
— The Manila Times

Duterte bans new ecozones
As part of his administration’s effort to boost development of special economic zones (ecozones) in the countryside, President Rodrigo Duterte has banned the processing of applications for ecozones in Metro Manila.
— The Manila Times

Duterte pushes Asean cooperation in economic develpoment
Greater cooperation on inclusive, equitable and sustainable economic development as well as promoting the rights of migrant workers and other vulnerable groups were among President Duterte’s principal concerns in his talks with his counterparts and business leaders at the 34th Association of Southeast Asian Nations (ASEAN) Summit here this weekend.
— The Philippine Star

Should we ditch our distrust of China?
In the Philippines, fear of China runs deeper than almost anywhere else in Southeast Asia – But Rodrigo duterte is trying to turn the tide.
— The Nation

Oil firms seek TRO to stop fuel cost unbundling
The Philippine Institute of Petroleum (PIP), the organization of the country’s major oil firms along with some independent players, had filed a petition for declaratory relief with application for temporary restraining order (TRO) before the Makati regional trial court (RTC) to stop the “fuel cost unbundling” policy instituted by the Department of Energy (DOE).
— Manila Bulletin

Group cites cases of human-rights violations in Masbate, Mindoro
Three human-rights advocates have been killed in Masbate while a fact-finding mission seeking to look into the reported cases of strafing and even deaths of three people in Mindoro was being prevented by the government, human-rights group Karapatan claimed over the weekend.
— Business Mirror

Indonesia, Philippines to Ratify Landmark Maritime Boundary Deal
Indonesia and the Philippines said they will begin to ratify a deal in August to establish a boundary between overlapping so-called exclusive economic zones.
— Bloomberg

PH backtracks, downplays 3rd party in Recto Bank probe
It’s another change in tune by the Philippine government as Malacañang clarified the terms of an upcoming joint investigation between the Philippines and China over the sinking of a Filipino boat near Recto Bank (Reed Bank).
— Rappler

Duterte to sign EO cutting red tape after Asean meet
President Duterte’s admonition for government offices to accord due attention and speedy processing of citizens’ official documents would now be mandatory and legally binding after his promise to issue an executive order (EO).
— Business Mirror

BSP wants to print PH passports again
The Bangko Sentral ng Pilipinas (BSP) wants to take back the printing of the country’s passports or e-passports, along with the generation of the national identification or ID card.
— Manila Bulletin

Sara Duterte bats for localized martial law, wants Davao exempted
Mayor Sara Duterte-Carpio said she would would recommend to Malacañang a localized imposition of martial law, which is still effective in Mindanao two years after it was imposed to contain the movement of local and foreign terrorists in Marawi City.
— Business Mirror

‘NCR ban could dent ecozone investments’
DEVELOPERS over the weekend warned that investment inflows to economic zones could further decline in the face of President Duterte’s moratorium on economic zone development in Metro Manila.
— Business Mirror

Family of 6 die in Caloocan fire
A family of six died when a fire broke out at their house in Bagong Silang, Caloocan City before dawn yesterday.
— The Philippine Star

CA reverses dismissal, perpetual disqualification to hold public office of Cagayan de Oro mayor
The Court of Appeals (CA) has reversed the 2017 ruling of the Office of the Ombudsman (OMB) that ordered the dismissal from the service of Cagayan de Oro City Mayor Oscar Moreno and his perpetual disqualification to hold public office.
— Manila Bulletin

Malacañang-led steering committee set for energy projects’ permitting
A Malacañang-led steering committee has been formed to concretize frameworks on the proposed streamlining of energy projects’ permitting under the “Energy Virtual One-Stop Shop Act” (EVOSS), an information technology-underpinned platform in the documentation and processing of power project applications.
— Manila Bulletin

2016 land area master list adoption spells hard times for lgu
NEWLY elected local officials looking to spend more for various public services and projects during their term may have to consider some belt-tightening measures with the adoption of the 2016 master list of land areas.
— Business Mirror

Robredo ‘not confident’ about joint PH-China probe, backs third-party inquiry
Vice President Leni Robredo on Sunday, June 23, said she is not confident about the planned joint probe with China into the sinking of a Filipino boat in Recto Bank (Reed Bank), and instead supported the idea of an investigation done by a third party.
— Rappler

DOTr eyes completion of Bicol Int’l Airport by June 2020
Department of Transportation (DOTr) Secretary Arthur Tugade has assured Bicolanos the Bicol International Airport (BIA), now under construction in Barangay Alobo here, would be completed in June 2020, and would be operational shortly after then.
— Philippine News Agency

Philippines calls for ‘upgrade of worker skills’ in ASEAN
President Rodrigo Duterte on Saturday, June 22, called for the upgrading of the skills of the workforce in member-countries of the Association of Southeast Asian Nations (ASEAN), in support of the 4th Industrial Revolution.
— Rappler

DOH advises public to clean to keep mosquitoes away
The Department of Health (DOH) reiterates its advisory to the public to clean all possible mosquito breeding sites in the homes and surroundings especially with the rainy season in when dengue cases tend to peak.
— Philippine Information Agency

CDO exec wants CCTVs installed in videoke joints
The Regulatory and Complaint Board (RCB) of this city government will lobby for the passage of an ordinance requiring videoke joints and movie cafes to install security cameras in each room of their establishments.
— Philippine News Agency

Groups urge Filipinos to defend Philippine territory after boat sinking
After the sinking of a Filipino boat in the West Philippine Sea, various groups echoed the call to defend the country’s territory as they held a protest at the Rajah Sulayman Park in Manila on Saturday, June 22.
— Rappler