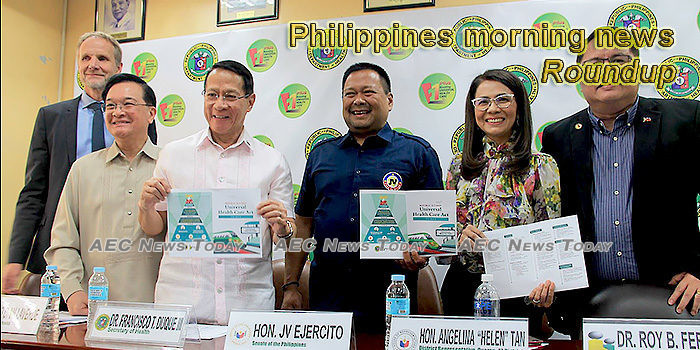 ‘Flagship P8 trillion infrastructure program at a bottleneck’
As the government’s ambitious P8-trillion infrastructure program, commonly referred to as Build Build Build or BBB, continues to lag behind targets, analysts are now raising doubts over the Duterte administration’s capability to complete these flagship projects by 2022.
— The Philippine Star

Proposed 2020 budget approved by Tuesday, then ratified
THE PROPOSED P4.1-trillion national budget for 2020 will be approved on Tuesday, instead of Monday as initially planned, as senators sought more time to study the version produced by the Bicameral Conference Committee, Senate Finance Committee Chairman Senator Juan Edgardo M. Angara said on Sunday.
— BusinessWorld

Philippines is ‘the lead in the South China Sea disputes,’ Locsin claims
Within days of the International Criminal Court prosecutor saying it has no jurisdiction over the allegations against Chinese President Xi Jinping for “crimes against humanity” in the West Philippine Sea, Foreign Affairs secretary Teodoro Locsin, Jr. tweeted that the Philippines often stood up to China.
— The Philippine Star

South Korea, China lift 10-month arrivals
The Philippines continues to be a place for fun for many foreign tourists, attracting some 6.8 million of them from January to October this year.
— Business Mirror

Duterte eases off on water firms, offers to fix contract
The government is willing to negotiate with Manila Water and Maynilad to resolve the “onerous” provisions in the 1997 water deal between the government and the two private utility companies, Malacañang said Sunday.
— Manilastandard.net

DBM drafting simpler bill that forces punctual state spending
THE DEPARTMENT of Budget and Management (DBM) is drafting a simpler version of the proposed budget reform bill and plans to submit it to Congress in 2020’s “first quarter.”
— BusinessWorld

Senate, House budget bill versions ‘90% to 95%’ reconciled – Angara
About 90 percent of the conflicting provisions of the Senate and the House of Representatives’ versions of the 2020 budget bill had been reconciled, Senate Finance Committee chair Sen.
— GMA Network

DTI sees 2-4% rise in exports in 2019
The Department of Trade Industry (DTI) expects exports of goods and services to increase by 2 to 4 percent up to about USD99 billion this year, with services leading the growth.”
— Philippine News Agency

DTI: Trade row hurts 2019 goods exports
The Philippines may end 2019 with a flat growth in merchandise goods exports, as trade tensions between the United States and China dampened demand for locally made products, according to the Department of Trade and Industry (DTI).
— Business Mirror

Malacañang: Morales, Del Rosario tapped ‘ineffective process’ for propaganda value
Malacañang on Saturday, December 7, welcomed the conclusion of the International Criminal Court (ICC) that it has no jurisdiction over the crimes allegedly committed by China in the West Philippine Sea.
— Rappler

Changing perks could halve jobs — SEIPI
ELECTRONICS MANUFACTURERS — whose products make up more than half of the country’s goods sold abroad — expect 50% job loss by 2026 if the current version of the bill that overhauls tax incentives was passed, Semiconductor and Electronics Industries in the Philippines, Inc. (SEIPI) President Danilo C. Lachica said.
— BusinessWorld

Measures seeking to improve education quality filed at House
LAWMAKERS have proposed separate measures to improve the quality of education in the country.
— BusinessWorld

High court approves amendments to rules
THE Supreme Court has approved changes to both the 1997 Revised Rules of Civil Procedure and Revised Rules on Evidence.
— BusinessWorld

Philippines wants to strengthen medical tourism
Executive checkups, dental procedures are some of the medical treatments the Philippines has to offer that could attract more health and wellness tourists into the country, an official of the Department of Tourism (DOT) said.
— The Philippine Star

‘PHL needs other growth drivers to reduce poverty’
The National Economic and Development Authority (Neda) said there is a need to “level up” economic growth and incomes to further cut poverty incidence, which dropped to 16.6 percent in 2018, from 23.3 percent in 2015.
— Business Mirror

PRRD wants 200 free hajj slots for poor Muslims in 2020
President Duterte wants 200 indigents Muslim Filipinos to perform Islamic pilgrimage or hajj next year for free, with his office shouldering all their expenses at some P200,000 each.
— Manila Bulletin

Lawmaker seeks legalization of ‘habal-habal’
A leader of the House of Representatives on Sunday called for the swift passage of a house bill that seeks to legalize motorcycle-for-hires, or habal-habal, as a mode of public transportation nationwide.
— Business Mirror

Isabela floods leave P825 million damage to agri-fisheries
At least P825 million worth of agricultural and fishery products were destroyed by heavy rains and floods in Isabela last week.
— The Philippine Star

DOT to boost food tourism initiatives next year
The Department of Tourism (DOT) will continue its push for food tourism next year as it will boost its marketing initiatives in positioning the country as a gastronomic destination.
— The Philippine Star

We reach a critical point in rice tariffication
We are ending the last quarter of the year, which is our main harvest season and when palay prices are seasonally at their lowest.
— BusinessWorld

DSWD gives relief supplies to flood-hit families in Cagayan, Isabela
The Department of Social Welfare and Development (DSWD) Field Office 2 has conducted relief operations for families in various municipalities affected by rains and flooding caused by the surge of the Northeast Monsoon and the tail end of a cold front.
— Philippine Information Agency

Duterte never harassed critics, it’s the other way around
Despite being harassed by his critics and detractors, President Rodrigo Duterte has never done the same to them, Malacañang said on Sunday.
— Philippine News Agency

CHR condemns use of child soldiers after 16-year-old boy died in clash
The Commission on Human Rights on Sunday denounced the use of children as warriors in armed conflict affected areas after the death of a 16-year-old boy in a clash between the state forces and rebels.
— GMA Network

Eleazar wants SAF to go after drug lords
To further intensify the government’s crackdown on illegal drugs, the Special Action Force (SAF) should be included in the anti-drug campaign, especially against high-value targets or big-time drug lords, a ranking official of the Philippine National Police (PNP) said.
— Philippine News Agency

Solon: K to 3 pupils must focus only on reading, math, GMRC subjects
A lawmaker on Sunday suggested not to overload the kindergarten to Grade 3 pupils with many subjects so that they can focus on reading, mathematics and good manners and right conduct (GMRC).
— GMA Network

4 Abu Sayyaf bandits killed in Sulu clash
At least 4 members of the Abu Sayyaf Group (ASG) were killed in a battle with government forces on Saturday, December 7, in Sulu province, said the Armed Forces of the Philippines (AFP) Western Mindanao Command (Westmincom).
— Rappler

NUPL slams posters linking progressive individuals, groups with CPP
The National Union of Peoples’ Lawyers on Sunday slammed the posting of several paraphernalia in Leyte and General Santos City which appears to link progressive groups and individuals with the Communist Party of the Philippines.
— GMA Network

Palace predicts ICC junking of motion to probe PHL’s war on drugs
Malacañang said Sunday that the International Criminal Court will also decide to dismiss, for lack of jurisdiction, a motion urging the court to determine whether it is in the position to investigate complaints arising from the Philippines war on drugs.
— GMA Network

‘For democracy’: De Lima urges lawmakers to renew ABS-CBN franchise
Detained Senator Leila de Lima on Saturday, December 7, called on her fellow lawmakers to renew the franchise of broadcasting giant ABS-CBN Corporation , saying that doing otherwise would make them complicit in the death of democracy in the country.
— Rappler

Bohol aims to become PH milk capital
Bohol Province is pushing to lead the country’s milk industry after the National Dairy Authority (NDA) and the Philippine Carabao Center (PCC) located inside the Ubay Stock Farm started its dairy production from cattle and carabao and Bohol farmers began to adopt dairy production as an alternative source of income.
— Manila Bulletin

LRWC ends talks with Galaxy, drops plans for Boracay casino
LEISURE & Resorts World Corp. (LRWC) is dropping its plan to build a casino on its 23-hectare property in Boracay, as the company is no longer in talks with Galaxy Entertainment Group for the project.
— BusinessWorld