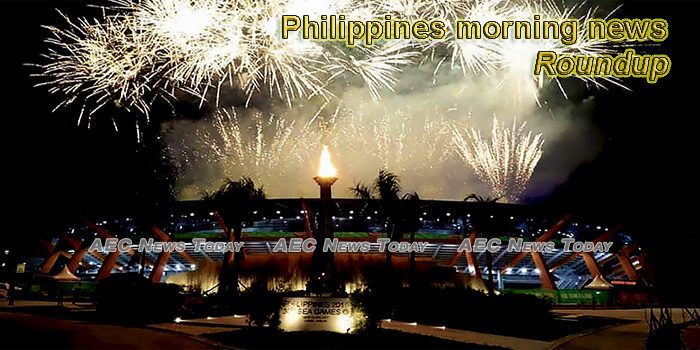 200,000 evacuated as Typhoon Kammuri lashes Philippines
The Philippines has evacuated 200,000 people in coastal and mountainous areas due to fears of flooding and landslides, saying it would also shut its main international airport as a powerful typhoon made landfall.
— Aljazeera

PH factory output slips to 5-mo low
GROWTH in the country’s manufacturing sector “softened” in November as production and new orders increased at a weaker pace and employment levels failed to improve, according to an IHS Markit survey.
— Manila Times

Duterte sees negligence behind SEA Games preps
There was negligence in the preparations for the 30th Southeast Asian Games which the Philippines is currently hosting, President Rodrigo Duterte said Monday.
— GMA News (video)

Anti-polio vaccination in Zambo now 90% complete
The City Health Office has already reached 90 percent of its target to immunized through the conduct of “Sabayang Patak Kontra Polio” in this southern port city.
— Philippine News Agency

Over 89,000 people preemptively evacuated for Tisoy –NDRRMC
The National Disaster Risk Reduction and Management Council (NDRRMC) said 89,722 individuals or over 22,500 families have been preemptively evacuated across Regions V, VIII, CALABARZON, and MIMAROPA as of 6 p.m. on Monday ahead of Typhoon Tisoy’s expected landfall over Sorsogon.
— GMA Network

PHL visitor receipts in January-September 2019 up 26%
REVENUE generated by the tourism industry from foreign visitors grew by 25.8 percent to some $7.3 billion (P379.6 billion) in the nine months to September 2019.
— Business Mirror

Gov’t pushes reform agenda
There is no turning back on the Duterte administration’s comprehensive reform agenda despite opposition by some sectors to a number of controversial measures necessary for the country’s rapid and inclusive growth, an economic manager said.
— Manila Bulletin

ADB launches $50 million financing for broadband in remote islands
The Asian Development Bank (ADB) has signed its first satellite financing agreement worth $50 million that will bring affordable broadband to countries such as the Philippines and Indonesia.
— The Philippine Star

Foreign chambers nix additional taxes on mining
Foreign businessmen in the country are against a plan to impose additional taxes on the mining industry, saying this would be counterproductive to government’s aim of increasing its revenue take from the sector.
— The Philippine Star

Robredo defers release of anti-drug report due to ongoing SEA Games
Vice President Leni Robredo will release her report on the government’s anti-illegal drug campaign–the information she gathered during her 19-day stint as co-chair of the anti-drug panel–at the conclusion of the Philippines’ hosting of the 30th Southeast Asian Games which ends on December 11.
— GMA Network

Typhoon strands 5,300 passengers
MORE than 5,300 passengers were stranded in various ports in Southern Tagalog, Bicol Region, and in Western and Eastern Visayas as Typhoon Tisoy threatened more than a dozen provinces, according to the Philippine Coast Guard.
— Manila Times

New Clark sports facilities not part of original proposal by MTD Berhad
The sports complex within New Clark City was not originally proposed by the Malaysian firm behind the facility currently in use at the 30th Southeast Asian Games, according to Bases Conversion and Development Authority (BCDA) president Vince Dizon.
— Rappler

DOT launches website offering travel packages, promos for SEA Games participants
The Department of Tourism has launched a website with travel promos for participants of the 30th Southeast Asian Games who wish to take the opportunity to go around the country.
— Eagle News

Energy dept wants grid operator audited
THE Department of Energy (DoE) wants the National Transmission Corp. (TransCo) to conduct an audit of the National Grid Corp. of the Philippines (NGCP) to put to rest the security issues hounding the latter amid lingering fears that China could take over the country’s power grid.
— Manila Times

PH financial market on ‘risk-off’ condition
THE Philippine financial market has entered into a “risk-off” mode amid the synchronized slowdown in global growth, according to the country’s Financial Stability Coordination Council (FSCC).
— Manila Times

Palay production down 4.5% in July-Sept
THE country’s palay (unmilled rice) output went down by 4.5 percent to 3.05 million metric tons (MMT) in the third quarter of the year from 3.20 MMT in 2018, the Philippine Statistics Authority (PSA) said.
— Manila Times

Gov’t rejects PXP proposal to take over Malampaya
THE GOVERNMENT has rejected the unsolicited proposal of listed exploration company PXP Energy Corp. to take over the Malampaya gas exploration service contract, Energy officials said on Monday, explaining that the process is not allowed under existing rules.
— BusinessWorld

Construction of Makati subway to start this year
THE builder of the Makati City Subway Project is hopeful of completing the intracity railway a year ahead of schedule after obtaining an environmental clearance from the Department of Environmental and Natural Resources (DENR).
— BusinessWorld

E-payment transaction value rise to 20% of total in ’18
Combined efforts of both the government and the private sector to increase digital payments in the country have resulted in higher value of transactions that account for about 20 percent of the total as of 2018.
— Philippine News Agency

Entertainment City firms slam DOTr order to transfer flights
Entertainment City, a gaming and entertainment complex under the Philippine Amusement and Gaming Corporation, objected to the transfer of its chartered flights from Ninoy Aquino International Airport (NAIA) to Sangley Airport in Cavite ahead of the set deadline for the transfer on May 31, 2020.
— Rappler

Mining firms urged to collaborate with DOST on research and development
MINING companies are encouraged to work with the Department of Science and Technology (DOST) to come up with new innovations to help the local mining industry grow and be more competitive.
— BusinessWorld

DOT taps int’l media for PH promotion
The Department of Tourism (DOT) has partnered with international media to showcase the Philippines and boost tourist arrivals from different parts of the world.
— Philippine News Agency

Facebook takes down ‘Narinig ko sa UP’ over alleged ‘terrorism, criminal activity’
For the University of the Philippines (UP) community, Facebook’s takedown of the decade-old group ‘Narinig ko sa UP’ (Overheard at UP) was the end of an era.
— Rappler

HIV cases soar in QC
The Quezon City government expressed alarm over the high number of human immunodeficiency virus (HIV) cases in the first seven months of the year. Data from the City’s health department showed that 505 new HIV cases were recorded from January to July this year. Only 19 of these were females.
— Manila Times

LTO summons doctor in viral road rage video
The Land Transportation Office yesterday summoned a doctor to explain his rude behavior towards a fellow motorist during a road rage incident caught in a video that went viral online.
— Tempo

Reds, not NTF ELCAC, peddling lies, misinfo: Parlade
A ranking official of the National Task Force to End Local Communist Armed Conflict (NTF ELCAC) dismissed claims that he was ordered out of a forum in Quezon City last November 27 to stop him from peddling lies and misinformation about militant groups.
— Philippine News Agency

6 PRO-7 cops sacked for grave neglect of duty
The chief of the Police Regional Office (PRO-7) in Central Visayas on Monday announced the dismissal from service of six police officers over administrative charges.B
— Philippine News Agency

NAPOLCOM promotes 42 more policemen in Marawi siege
The National Police Commission (NAPOLCOM) on Monday announced that 42 more policemen have been granted special promotions due to their heroic deeds during the battle for Marawi City in 2017.
— GMA Network