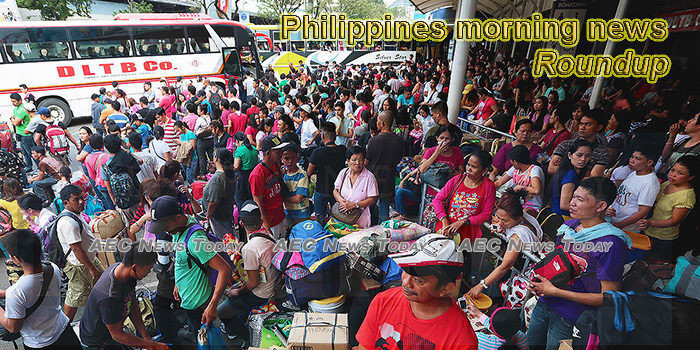 Undeclared billions from SEAG broadcasts?
The public talked about all the money that was spent in staging the 30th Southeast Asian Games.
— The Philippine Star

23 hurt in Mindanao blasts
A series of explosions rocked Cotabato City and the provinces of Cotabato and Maguindanao Sunday night, wounding 23 people including Army troopers, the military reported Monday.
— Tempo

Duterte damage to CSOs skin-deep
The Duterte administration has been in power for three and a half years, and like a household visited by a devastating storm, Philippine civil society organizations (CSOs) have formally assessed the damage President Duterte has wrought on the sector.
— Philippine Daily Inquirer

Laguna lambanog deaths rise to 12 as province bans sale of the liquor
The death toll due to lambanog consumption in Laguna’s Rizal town rose to 12, prompting the local government to ban the sale of the distilled palm liquor in the entire province.
— GMA Network

Duterte vows to take action on speed-related accidents
President Rodrigo Duterte on Monday vowed to address the problem of speeding motorists as he lamented the deaths caused by speed-related vehicle crashes.
— GMA Network

Christmas party shooting leaves 3 dead, 1 wounded
A Christmas party turned into a tragedy inside the Department of Public Works and Highways (DPWH) office in Manila on Sunday night after a security guard went into a shooting spree, killing three people and wounded another.
— Tempo

1 dead,118 others rushed to hospital in North Cotabato due to food poisoning
A 53-year-old woman succumbed to dehydration while 118 others are now in hospitals after feasting on food served at a party over the weekend in the upland Arakan town in North Cotabato.
— The Philippine Star

Record 6-year high in labor displacements reported
Almost 80,000 workers lost their job in January to October this year due mainly to layoffs in the manufacturing sector, according to preliminary data released by the Department of Labor and Employment (DOLE).
— Business Mirror

LGUs pledge P2.5M to protect and conserve Palawan mountain
The protection and conservation of Mount Mantalingahan Protected Landscape (MMPL) in Palawan province will be getting the much-needed boost from local government units (LGUs).
— Business Mirror

House panel focusing on pushing POGO, road user taxes to plenary
THE House committee on ways and means will seek to elevate to the plenary legislation laying down tax measures for online gaming firms, road users, the mining industry and single-use plastics, its chairman said.
— BusinessWorld

DTI to hold business mission in US, Mexico
The Department of Trade and Industry (DTI) is set to hold an outbound business matching mission (OBMM) in Mexico and the US next year as it aims to increase trade with the two countries.
— The Philippine Star

Japan to assist govt in crafting Subic Bay development plan
The Philippine government has tapped the expertise of the Japan International Cooperation Agency (Jica) in modifying the master plan for the development of the Subic Bay and the areas within and around its periphery.
— Business Mirror

Cebu Pacific Orders 15 Airbus Aircraft, Including Up To 10 A321XLRs
Cebu Pacific has signed a Purchase Agreement with Airbus for the order of 15 A320neo family aircraft, including up to 10 A321XLR.
— Travel News Asia

Whether 2020 budget was subject to graft depended on Palace -Cayetano
Whether the projects funded in the proposed P4.1 trillion national budget for 2020 would be subject corruption depended on how Malacañang would implement these projects, Speaker Alan Peter Cayetano said on Monday.
— GMA Network

Manila gov’t heightens security in Divisoria amid holiday rush
Despite previous road clearing efforts by the Manila City government, Divisoria remains as busy as ever days ahead of Christmas and New Year’s Day.
— GMA Network

Lamudi Housing Fair treats OFW home seekers
Overseas Filipino Workers (OFWs) who came home to the Philippines for the holidays want to make full use of their limited time back in the country.
— Manila Times

1 dead, 8 hurt in NPA attacks
A soldier was killed while eight others were wounded when suspected members of the New People’s Army (NPA) attacked soldiers and cops in Labo, Camarines Norte, and in Tubungan, Iloilo, and Quezon province Monday morning, several hours after the holiday truce between government troops and the communist rebels took effect.
— Tempo

Methanol poisoning behind lambanog incidents — DOH, PGH
The Department of Health and Philippine General Hospital on Monday pointed to methanol poisoning as the cause behind the deaths of 11 people and the hospitalization of hundreds of others in Laguna and Quezon after drinking lambanog.
— GMA Network

Makati achieves highest polio vaccine coverage rate in Metro Manila
Makati City exceeded its target for the second round of catch-up polio vaccination following the September announcement of a polio outbreak in the country.
— Rappler

2 days before Christmas, sea travel suspended in Visayas areas threatened by Ursula
The Philippine Coast Guard has suspended sea travel in all areas under Signal No. 1 on Monday, December 23.
— Rappler

Security reinforced after Cotabato blasts on eve of Duterte visit
LAW enforcers beefed up security in parts of the Mindanao region after blasts injured at least 21 people in Cotabato province on the eve of President Rodrigo R. Duterte’s planned visit on Monday.
— BusinessWorld

PRRD’s closeness with Quiboloy won’t affect rape case
Malacañang on Monday said it will not intrude on cases filed against Kingdom of Jesus Christ founder Pastor Apollo Quiboloy, assuring that President Rodrigo Duterte’s closeness with the pastor will not affect the case.
— Philippine News Agency

SWS: 79% of Pinoys satisfied with campaign vs. illegal drugs
At least eight out of 10 Filipinos expressed satisfaction with the government’s campaign against illegal drugs, according to the results of a Social Weather Stations survey released over the weekend.
— GMA Network

PRO 6 aims for zero major incident this Yuletide season
The Police Regional Office in Western Visayas (PRO 6) is working to attain its aim to have zero major incidents on the celebration of the Christmas and New Year, according to its top police officer.
— Philippine News Agency

Peace group lauds gov’t, NPA Christmas truce
The temporary ceasefire agreed to by the government and communist rebels should be a cause for celebration for Filipinos during the Yuletide season, a peace advocate group said Monday (Dec. 23).
— Philippine News Agency

Gov’t ready for NPA attacks despite holiday truce with Reds
Malacañang on Monday said the government is prepared for possible attacks that may be launched by the New People’s Army (NPA), the armed wing of the Communist Party of the Philippines (CPP), even after President Rodrigo Duterte ordered a unilateral and reciprocal ceasefire.
— Philippine News Agency

Cayetano defends P150,000 bonus given House employees
Speaker Alan Peter Cayetano on Monday defended the P150,000 bonus he gave to each employee at the House of Representatives.
— GMA Network