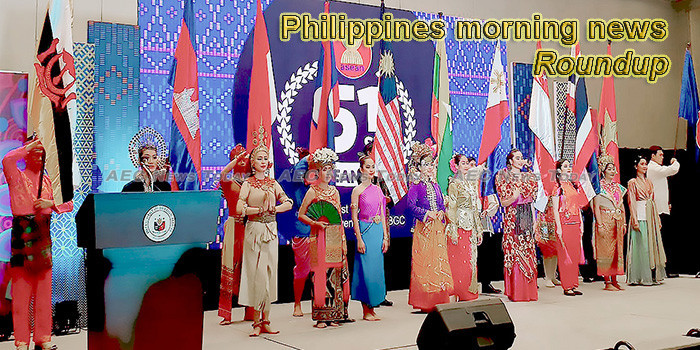 PH has most dengue cases in Southeast Asia in 2019
The Philippines has recorded the most number of cases of dengue in Southeast Asia so far in 2019, with 146,062 cases and 622 deaths due to the mosquito-borne disease.
— Rappler

Government nets P4.70 for every P1 of fiscal incentive–DTI
INCENTIVES granted to investors are not wasted as the government earns P4.70 for every P1 it gives away via tax breaks and exemptions, the Department of Trade and Industry (DTI) said on Thursday.
— Business Mirror

Mati City gets P152-M worth of infra projects
The city government of Mati in Davao Oriental received a total of 12 projects from the Rural Enterprises and Agriculture and Fisheries Productivity (I-REAP) program of the Department of Agriculture 11 (DA-11).
— Philippine News Agency

Philippines collects P356 million from POGOs, as China condemns gambling
The Chinese government issued a strongly-worded statement that enumerated the many problems it has encountered with online gambling, but this is an industry that has proved to be a good source of revenue for the Philippines.
— Rappler

DILG, COA: PCOO’s P10-million budget for federalism info drive still unliquidated
The Department of Interior and Local Government (DILG) has asked the Presidential Communications and Operations Office (PCOO) to immediately liquidate, if not refund the P10 million budget that the DILG transferred to PCOO for the development and production of multimedia materials for Federalism Campaign.
— GMA News

Forex reserves up slightly in July
The country’s gross international reserves (GIR) increased to $85.18 billion in July from the revised $84.93 billion in June as the Bangko Sentral ng Pilipinas (BSP) continues to build up the foreign exchange buffer.
— The Philippine Star

Beijing’s crackdown on offshore gambling to hurt PHL operators
CHINA is stepping up a crackdown on gambling activity by its citizens offshore, threatening what has become a lucrative industry for gaming operators in places like the Philippines.
— Business Mirror

American Volunteer Branded ‘Enemy of State’ and Shot Outside His Home in the Philippines
An American human rights volunteer is reportedly in critical condition after he was shot four times in the Philippines.
— TIME

AirAsia lobbies to cut airport terminal fee, junk travel tax
Budget carrier AirAsia Philippines is pushing for lower taxes and fees on international flights, as the rationale of some of these extra costs is already “outdated,” an official said on Thursday.
— Business Mirror

China crackdown on PH casinos to hit property shares
China urged the Philippines to stop its casinos from hiring Chinese citizens as part of a wider crackdown on cross-border gambling and illegal funds flow, a move seen to hurt the country’s property companies.
— Manila Bulletin

Duterte open to reviving Dengvaxia program
Saying he prefers to err on the side of science, President Duterte is open to the resumption of the government’s Dengvaxia vaccination program to avert the national dengue epidemic that has so far claimed 622 lives across the country since January.
— The Philippine Star

As Duterte Drifts Toward China, a U.S. Carrier Makes a Point in Manila
Amid concerns in the Philippines about the future of its military alliance with the United States, the aircraft carrier Ronald Reagan moored off Manila this week to show support for an ally locked in a territorial dispute with China.
— The New York Times

Typhoon Hanna leaves PAR
Typhoon Hanna (Lekima) left the Philippine Area of Responsibility (PAR) at 12:30 am on Friday, August 9, but parts of Luzon and the Visayas are expected to still have rain from the southwest monsoon or hanging habagat.
— Rappler

DOT courts diplomatic row for support in UNWTO bid
THE Department of Tourism (DOT) has reached out to the diplomatic corps in Manila, appealing for their respective countries’ support in its bid to host the 24th Session of the UNWTO General Assembly in 2021.
— Business Mirror

DOJ to start probe on sedition raps vs. Robredo, opposition over narco list videos
The Department of Justice on Friday is set to hold the first preliminary hearing into the sedition complaint against Vice President Leni Robredo and several opposition figures over their supposed involvement in the “Ang Totoong Narco List” videos, linking the Duterte family and friends to drugs.
— CNN Philippines

‘Giving TIN to alien workers required by PHL tax code’
THE Department of Finance (DOF) said on Thursday the issuance of tax identification numbers (TINs) for foreign nationals working in the Philippines will still continue, as this is in line with the provisions of the country’s tax code.
— Business Mirror

PAGCOR scrambles to contain damage from POGO ‘hubs’ proposal
PHILIPPINE Amusement and Gaming Corp. (PAGCOR) Chairperson Andrea Domingo walked back proposals to relocate Chinese offshore gaming workers to “self-contained hubs,” saying that such communities will have ample amenities for residents and will be “safe” with no restrictions on their movement.
— BusinessWorld Online

BOI, PEZA issue warning against cutting incentives granted to firms
For the very first time, the government’s premier investment-generating agency – the Board of Investment (BOI) – has spoken against “rushing” the implementation of proposed cuts in tax incentives, which had been committed to export and labor-intensive investors in the country.
— Manila Bulletin

20 cases vs Marcoses dismissed so far; 21 pending
Twenty forfeiture cases against the Marcos family and their cronies have been dismissed by the Sandiganbayan.
— The Philippine Star

Farmers wary of further palay price declines as traders reluctant to buy
FARMERS have asked the government to address the steep decline in farmgate prices for palay, or unhusked rice, warning that the traders who buy from farmers are inactive in the market because they are stuck with expensive inventory from before the government allowed imports of cheaper foreign rice.
— BusinessWorld Online

Lift pork-import ban, Germany tells Philippines
Berlin is urging Manila to immediately lift its import ban on German meat after the European state imposed preventive measures to avoid comingling of shipments to the Philippines in the future.
— Business Mirror

Philippines: Hopes for more vegetable trade in Benguet trading center
Benguet remains the top producer of temperate vegetables in the country, with P200 million (€3.42 mln) worth of vegetables already being sold at the Benguet Agri-Pinoy Trading Center (BAPTC) since 2015.
— Fresh Plaza

COA calls out DepEd’s questionable contracts, P254M erroneous textbooks
The Department of Education (DepEd) spent P254 million for contracts to produce textbooks which were found to be erroneous, as auditors also called out that the contracts to develop the textbooks within the agency were wrong in the first place.
— Rappler

PNP gets P784M worth of cars, weapons, gear
The Philippine National Police on Thursday got P784 million worth of guns, vests and cars meant to “enhance the basic operational requirements of every PNP unit” in the country.
— Philippine Daily Inquirer

Call centers may not make it to DOF’s tax perks list
The Department of Finance (DOF) thinks the voice sector of the business process outsourcing (BPO) industry should not be prioritized for tax incentives, since the sector is already competitive enough.
— Philippine Daily Inquirer

BTA targets Bangsamoro gov’t codes by end of 2019
The Bangsamoro Transition Authority (BTA) aims to finalize 8 government codes by the end of 2019 so that they can be implemented starting 2020, when the Bangsamoro region gets its first block grant.
— Rappler

Bangsamoro barangays to get boost in education, health services in 2019
A little over 4 months after the inauguration of the Bangsamoro region, the pressure is on for the new regional government, the Bangsamoro Transition Authority (BTA), to bring concrete improvements to lives of the region’s residents.
— Rappler

Senate probe into provincial bus ban set for August 13
Senator Grace Poe set a hearing on the controversial provincial bus ban to get an explanation from traffic management agencies after the gridlock along EDSA this week.
— Rappler