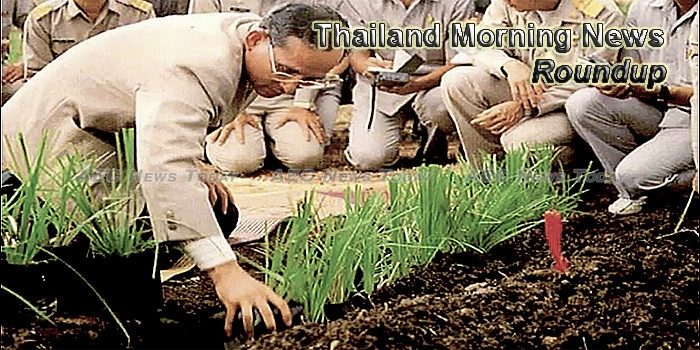 Strong baht sparks fears
The private sector has voiced concerns about the stronger baht, which recently hit a 31-month high, saying it could hurt exports and tourism as well as the overall Thai economy.
— Bangkok Post

Southern flood situation continues to be cause for concern
The Department of Disaster Prevention and Mitigation (DDPM) has dispensed 200 boats to its office in Songkhla province to assist citizens still being impacted by persistent flooding.
— NBT World (video)

Gulf Energy leaps 27.8% in SET debut
SET-listed Gulf Energy Development Plc, one of Thailand’s largest power producers, yesterday recorded a 27.8% rise from the opening price on its first trading day, with the issuing size worth 24billion baht, the largest in 11 years.
— Bangkok Post

Chinese link with CP on EEC fund
CHINESE conglomerate HNA Group plans to link up with CT Bright, an investment unit of Charoen Pokphand Group (CP Group), to set up a fund for investment in the Eastern Economic Corridor (EEC).
— The Nation

Activists urge ban on ‘hazardous’ farm chemicals
Thai Pesticide Alert Network (Thai-PAN) will today submit a petition to the Ministry of Industry, asking it to ban the herbicide paraquat and the pesticide chlorpyrifos, while restricting the use of glyphosate.
— Bangkok Post

PM to visit Trang as flooding continues
Thailand’s Prime Minister has scheduled a visit to Trang province this December 8 to follow up on the flood situation which is impacting 8 provinces of the southern region.
— NNT

How stable is post-cremation Thailand?
In the lead-up to the cremation of deceased Thai King Bhumibol Adulyadej, authorities rounded up 42 suspects at check points around the royal ceremony attended by new King Maha Vajiralongkorn Bodindradebayavarangkun and other royal family members.
— Asia Times

Thailand waits for US decision on preferential duties under GSP
Thailand is currently awaiting the outcome of the United States’ revisions to its Generalized System of Preferences (GSP). The GSP governs import duties for developing countries, including Thailand.
— NBT World (video)

Leading economist forecasts no political repercussion on economy in 2018
The Thai economy is unlikely to be affected by the political situation in the country next year, according to an economist.
— NNT

Sino-Thai high-speed railway project gets go-ahead
Bangkok has given the green light to Thailand’s first high-speed railway, spearheaded by China, an on-again-off-again project that was once hailed as the crowning project of Beijing’s Belt and Road Initiative.
— Asia Times

Hells Angels members busted in Pattaya
Police on Wednesday arrested and charged four foreigners – believed to be members of the Hells Angels motorcycle gang – with several criminal offences, and plan to deport and blacklist them from the country.
— Bangkok Post

Locals gather en masse to call for help on Phuket land claims
More than 100 local residents from the Pracha Samakkee Community massed at the Phuket Provincial Hall this morning (Dec 6) to call for help after 77 of the residents, who were said to have lived on the land where the community stands for over 10 years, were expelled by ‘capitalists’ they say have reclaimed the land.
— The Phuket News

TAT,Gurunavi to develop tourism, restaurant-guide app
The Tourism Authority of Thailand (TAT) has cooperated with Gurunavi, a restaurant-search website and mobile application, to promote food cultures and tourist attractions in Thailand and Japan.
— NNT