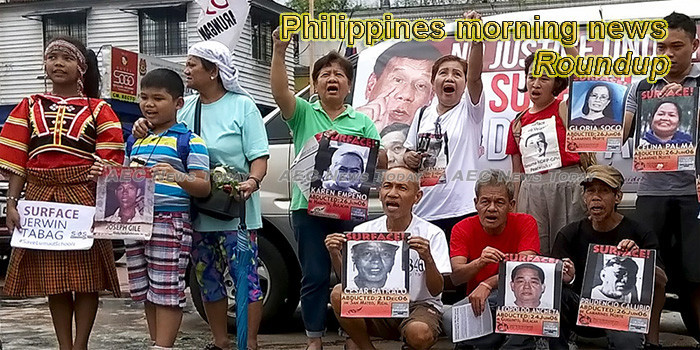 Duterte government to finish 21 big-ticket projects
The Duterte administration will complete less than a third of the infrastructure flagship projects by the end of the President’s term, according to documents released by the National Economic and Development Authority (Neda).
— Business Mirror

5 infrastructure projects subject to review – NEDA
FIVE out of 75 infrastructure flagship projects of the Duterte administration will be reviewed due to concerns raised about them, with two of these facing possible removal, according to the National Economic and Development Authority (NEDA).
— The Manila Times

Govt earns P160M from Mile Long – DoF
The 2.2-hectare Mile Long property in Makati City has generated P160 million in revenues for the government since 2017, the Department of Finance (DoF) reported.
— The Manila Times

ADB’s technical support for PHL infrastructure at $77M
THE ASIAN Development Bank (ADB) has so far disbursed $76.79 million to support the Philippines in creating a pipeline of infrastructure projects that may be implemented by the next administration.
— BusinessWorld Online

Sandiganbayan denies PCGG appeal over Batangas beachfront property
The anti-graft court denied the appeal of the Presidential Commission on Good Government (PCGG) against an order to reimburse the occupant of a contested property in Mabini, Batangas , P40 million even if the court declared it belonged to the government.
— Rappler

Neighbors, not PHL, will gain from US-China trade war–Fitch Solutions
The country’s neighbors—Thailand, Vietnam and Bangladesh—are poised to become the major beneficiaries of the trade war between the United States and China, but the Philippines is not in the radar of investors that are intending to relocate.
— Business Mirror

Construction promise best in PHL — note
THE PHILIPPINES can be expected to be among Southeast Asian economies least affected by the escalating Sino-United States trade war due to “stronger fundamentals” — thanks partly to robust construction activity — and “more limited exposure to global trade,” according to a note of Australia-based BIS Oxford Economics.
— BusinessWorld Online

China buys more and more Philippine bananas
Data from the Philippine Statistics Authority (PSA) showed that the country’s banana exports in January to June rose by more than half due to China’s huge appetite for the tropical fruit.
— Fresh Plaza

800K voters have registered for 2020 polls, says Comelec
Over 800,000 people have participated in the ongoing voter registration for the expected 2020 Barangay and Sangguniang Kabataan Elections (BSKE), the Commission on Elections (Comelec) said.
— Business Mirror

SC allows court trials via video conferencing in Davao City
The Supreme Court has allowed trial courts in Davao City starting Sept. 2 to conduct trials and hearings on high-profile criminal cases through video conferencing, a system that would enable detained persons to testify and be cross-examined inside their detention cells.
— Tempo

Duterte unfazed over China’s firm stand vs arbitral ruling on S. China Sea
President Rodrigo Duterte remains undaunted over China’s remarks that it would not recognize the July 2016 ruling of the Permanent Court of Arbitration (PCA) that invalidated Beijing’s expansive claims over the disputed South China Sea, his spokesman said Monday.
— Inquirer.net

Philippines: Standing ground amid great power competition
President Rodrigo Duterte heads to China this week for his fifth trip there since becoming president.
— The Straits Times

Philippines community recruits frogs in war against dengue fever
A community in Metropolitan Manila has recruited an army of frogs in an effort to combat the dengue epidemic ravaging the archipelagic nation through natural means.
— Taiwan News

DOH seeks P19.1 B for medicines, but solon warns of wastage
An administration lawmaker on Monday urged the Department of Health (DOH) to hire private logistics service providers to prevent the overstocking of drugs and medicines that it experienced in the past years.
— Manila Bulletin

Imee Marcos says Philippines has no official heroes
On National Heroes’ Day, Senator Imee Marcos asked whether the holiday is a misnomer since “the reality is that, officially, we have no heroes.”
— Rappler

Marawi rising from the rubble
Mayor Majul Gandamra said economic activity in the war-torn city is coming back, as more sectors have been cleared by the military, which allowed Marawi to celebrate its 79th charter anniversary for four days last week.
— Manilastandard.net

IPR protection in the ASEAN
The fastest-growing sub-sector in the Philippine economy over the past 5-1/2 years — 2014 to the first half of 2019 — is intellectual property products, under Capital Formation (or private investments). It was growing at 28% per year, with capital formation growing at 14% and GDP at 6.3%.
— BusinessWorld Online

Retirement summit held to entice American businessmen, Fil-comm leaders to look at PH’s potentials
The Philippine Consulate General in Chicago has called on American businessmen and Filipino community leaders to consider the Philippines as a potential retirement haven, citing the country’s sustainable economic growth under the administration of President Rodrigo Duterte.
— Manila Bulletin

PH to host high-level regional maritime meet
The Philippines, through the Maritime Industry Authority (MARINA), will bring together leaders of maritime agencies from participating International Maritime Organization (IMO) member countries as it hosts the second high-level regional meeting on Maritime Environment Protection of the Southeast Asian Seas (MEPSEAS) from Aug. 27 to 29 this year.
— Philippine News Agency

Lao Morning News For May 10