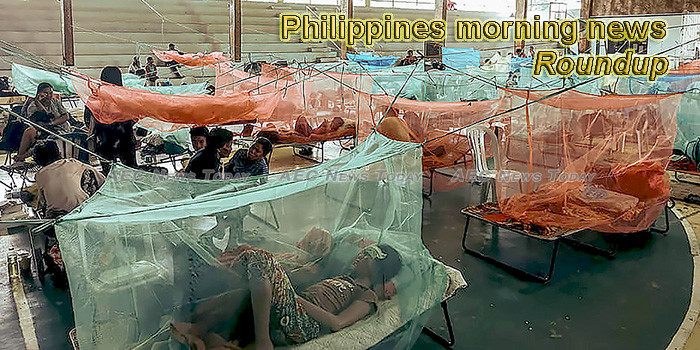 US group sees expansion of PH drug war killings to crackdown on Left
Attacks on civilians in the Philippines now included the killing of members and leaders of protest groups branded as communists, aggravating the violence arising from the government’s bloody campaign against drugs and increasing risks of a free fall to authoritarian rule, according to a United States-based conflict research and analysis group.
— Inquirer.net

Power consumers get P1.7-B refund – PEMC
POWER consumers in the country can expect some relief in paying their electricity bills after the Philippine Electricity Market Corp. (PEMC) reported that the P1.774-billion refund ordered by the Energy Regulatory Commission (ERC) because of overbilling has been implemented.
— The Manila Times

Vehicle sales pick up pace in 7 months
Vehicle sales further picked up in July, finally bringing year-to-date take-up at a faster pace than last year to signal a recovery for the local automotive industry.
— The Philippine Star

Lawmakers to minimize risk of 2020 budget delay
LAWMAKERS of both chambers of Congress are moving to avoid another delay in enactment of the national budget, which has put the government’s economic growth target this year at risk.
— BusinessWorld Online

Government eyes raising cement safeguard duty 40%
AS the P210 per metric ton (MT) tariff failed to stop the import surge, the government is eyeing to increase the safeguard duty on cement by over 40 percent to further protect the domestic industry, as recommended by the Tariff Commission.
— Business Mirror

DoE to evaluate 3 exploration bids, warns participating firms to meet qualifying requirements
THE Department of Energy (DoE) has warned three entities which nominated areas to explore for possible petroleum or gas deposits that it will disqualify any of them should they fail to meet eligibility requirements.
— BusinessWorld Online

SKorea donates $9.5M to boost Quirino agribusiness
The South Korean government, through the Korea International Cooperation Agency (Koica), has provided a $9.5-million (P475-million) grant for Quirino to help boost agribusiness in the province.
— The Manila Times

Death creeps at door of error-plagued Philippine justice system
IN A FEW DAYS, 49-year-old Jun Allego will walk free after spending more than half of his life in jail.
— BusinessWorld Online

AFP seeks tougher counterterrorism law
Citing rising terror threats, the Armed Forces of the Philippines (AFP) said there is now greater urgency to amend to the Human Security Act for security forces to better deal with the problem without having to worry about legal repercussions.
— The Philippine Star

Año bats for revival of Anti-Subversion law
Interior and Local Government Secretary Eduardo Año backed calls for the revival of the Anti-Subversion Law on Wednesday, saying it would be a weapon against the Communist Party of the Philippines (CPP), its armed wing, the New People’s Army, (NPA) and its front organizations.
— The Manila Times

PSC allots another P1.2 billion for athletes training in bid to win SEA Games overall title
There was never a time in the history of Philippine sports that a government agency has allotted—and is prepared to spend—over a billion pesos in preparation for a big international event such as the Southeast Asian Games.
— Philippine Daily Inquirer

Our rights in territorial sea vs our rights in EEZ
THE 1982 United Nations Convention on the Law of the Sea (UNCLOS) estab­lished the concept of Exclusive Economic Zone (EEZ), an area in the sea measuring 200 miles (370 kilometers) from a country’s coast.
— Tempo

Napoles invokes SC ruling junking Arroyo plunder in own pork barrel case defense
Businesswoman Janet Lim Napoles has asked the Sandiganbayan to drop the plunder case against her as one of the co-accused in the P183 million plunder case involving pork barrel funds leveled against former Senator Jinggoy Estrada due to the prosecution’s failure to identify the main plunderer.
— GMA News

2 Duterte Cabinet members ‘under investigation for corruption’
Two Cabinet members are being investigated by the Presidential Anti-Corruption Commission (PACC), the body created by President Rodrigo Duterte to weed out his abusive appointees.
— Rappler

10-year-old boy eaten by crocodile in Palawan town
A boy was killed after being snatched from a boat by a saltwater crocodile in the southern Philippines, as the reptiles’ shrinking habitat leads to repeated attacks, authorities said Wednesday, August 14.
— Rappler

Duterte signs law creating PH Coast Guard General Hospital
The Philippine Coast Guard will now have a hospital dedicated to its personnel, their children, and retirees under a new law signed by President Rodrigo Duterte this month.
— Rappler

DPWH urged to stop firm from dredging in Cagayan for operating without permit
The Department of Public Works and Highways (DPWH) should stop the dredging activity in Cagayan due to the absence of a necessary permit.
— Inquirer.net

CHR condemns discrimination vs. transgender woman who used ladies’ room at QC mall
“The Commission on Human Rights (CHR) strongly condemns the discrimination faced by Gretchen Custodio Diez on Tuesday, August 13, while at a Cubao mall,” the CHR said in a statement.
— GMA News

TESDA to conduct skills training for FRs in SurSur town
The Technical Education and Skills Development Authority (TESDA), led by its Provincial Director Rey Cueva, has expressed its commitment to extend the agency’s services to the Former Rebels (FRs) through the conduct of skills training during the recent “pulong-pulong” (dialogue) conducted on Aug. 6, 2019 in Barangay Janipaan, San Agustin town, this province.
— Philippine Information Agency