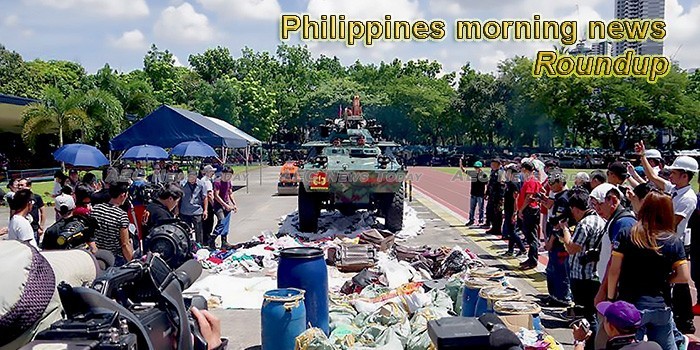 New quake strikes as Philippines hunts for survivors
Philippine rescuers were scrambling Tuesday to reach some two dozen people feared buried under a building near Manila that collapsed a day earlier in a strong earthquake, as a powerful new tremor hit the nation.
— Bangkok Post

PH to get $10B in deals, investments from Duterte’s China visit – DTI
The Philippines expects to get $10 billion in investments and deals with China when President Rodrigo Duterte goes to that country for the second Belt and Road Forum on April 25, the Department of Trade and Industry said.
— Rappler

Price freeze declared in quake-hit Pampanga; Dam damage hits P50M
THE Department of Trade and Industry (DTI) on Tuesday declared a price freeze in Pampanga a day after it got severely hit by a 6.1-magnitude earthquake that shook Luzon.
— Business Mirror

PH GDP growth seen slowing to 6.1%
The Washington-based Institute of International Finance (IIF) sees Philippine economic growth slightly slowing down this year even as overall debt as a share to the economy declined last year.
— Inquirer.net

Tremor death toll rises to 16
At least 16 persons were con­firmed dead while authorities are racing against time to rescue more people who are believed to have been trapped inside a four-storey establishment that collapsed in Porac, Pampanga during Monday’s 6.1 magnitude earthquake.
— Tempo

German FDI in ASEAN Part IV: The Philippines and Singapore
German investment in the ten member states of the Association of Southeast Asian Nations (ASEAN) has been increasing steadily and has the potential to grow further in the coming years.
— Asean Briefing

Chinese embassy expects 1.5M Chinese tourists in PHL in 2019
More than 1.5 million Chinese tourists are expected to flock to the Philippines this year, according to an official from the Chinese Embassy on Tuesday.
— GMA News

PHL seeks $5.618-billion loan mainly for Luzon railway commuter projects
THE Philippines is proposing $5.618 billion worth of projects for loan and grant financing from the Asian Development Bank (ADB) as of April 2019.
— Business Mirror

Powerful earthquakes that hit PHL over the years
Then National Disaster Coordinating Council (now National Disaster Risk Reduction and Management Council or NDRRMC), estimated that more than 1,200 lives were lost; 3,000 were injured; and, more than 300 went missing on July 16, 1990 when the magnitude 7.8 earthquake hit almost the entire Luzon.
— GMA News

ADB aid to PH hits $19B in 5 decades
The cumulative lending, grant, and technical assistance commitments of the Asian Development Bank (ADB) to the Philippines for more than five decades have reached $19.3 billion, a document released by the multilateral bank agency showed.
— Malaya

Calamity insurance of over P20B for quake hit provinces
THE national government has sufficient insurance cover to rebuild from the earthquakes that hit parts of Central Luzon on April 22 and Samar Island yesterday, and is awaiting more concrete estimates from agencies in the field, the Bureau of Treasury (BTr) on Tuesday.
— BusinessWorld Online

Duterte says he won’t appoint a new Budget Secretary
The Department of Budget and Management will have no permanent head until 2022, President Rodrigo Duterte said Tuesday.
— CNN Philippines

Magnitude 6.1 Luzon quake a wake-up call for structural audit of PHL buildings –urban planner Palafox
The magnitude 6.1 quake that hit Luzon on Monday may be considered a wake-up call to check the integrity of the buildings in the country, according to Filipino architect Jun Palafox.
— GMA News

7,000 religious sector, youth members form ‘human chain’ for coal-free Negros
Some 7,000 members of the religious sector and the youth formed a “human chain” on Monday, April 22, which is also Earth Day, to oppose the construction of a 300-megawatt coal-fired power plant here.
— Rappler

NUPL to raise its inclusion in ‘oust Duterte’ matrix before Supreme Court
The National Union of People’s Lawyers (NUPL) is set to raise before the Supreme Court on Wednesday the inclusion of its officers and members in the so-called oust-Duterte matrix, which they deem is the administration’s latest attack against human rights lawyers.
— GMA News

Filipino seamen wired home $1B in Jan-Feb
Filipino sailors on foreign ocean-going vessels wired home a total of $1.05 billion in cash via the banking system from January to February this year, up 10.5 percent from $956.15 million in the same two-month period in 2018, ACTS-OFW party-list group said recently.
— The Manila Times

Philippines’ Duterte hits Canada on exported garbage
Philippines President Rodrigo Duterte berated Canada on Tuesday in a longrunning dispute over waste exported to the Southeast Asia nation, threatening to sail it back to Canada.
— Reuters

Shift to e-invoicing system seen by ’22
The Department of Finance is considering fully implementing an e-invoicing system by 2022 to make it easier not only for the Bureau of Internal Revenue (BIR) to collect taxes but also for taxpayers to settle their dues.
— Inquirer.net

China’s investment approval authority leads mission to PH
Some of China’s biggest state-owned enterprises (SOEs) led by the State-owned Assets Administration and Supervision Commission are visiting the Philippines for the first time to explore business opportunities in the country while promoting their government’s strong push towards regional economic integration and opening up of global economy.
— Manila Bulletin

Phivolcs: Stop spreading false quake information
The Philippine Institute of Volcanology and Seismology (Phivolcs) appealed to the public to refrain from disseminating false information about an impending 7.1-magnitude earthquake in Metro Manila.
— Tempo

It’s ‘abuse’ to prevent workers’ evacuation during earthquake – labor group
Labor group Trade Union Congress of the Philippines (TUCP) hit employers who refused to let workers evacuate from buildings when a magnitude 6.1 earthquake rocked Luzon on Monday, April 22, and then made them resume work right after, without waiting for the structural integrity of the buildings to be checked.
— Rappler

Luzon grid gets power supply boost from PetroSolar
PetroSolar Corp. has added 20 megawatts of power generation capacity to the Luzon grid with the commissioning of its second solar farm in Tarlac City.
— Inquirer.net

Power back in quake-affected provinces in Visayas — NGCP
THE National Grid Corp. of the Philippines (NGCP) has fully restored power in provinces in the Visayas affected by a magnitude 6.5 earthquake that hit Eastern Samar on Tuesday.
— The Manila Times

Pampanga gov’t may be liable if Chuzon store proven to be substandard
The city government of Pampanga may be held liable for the alleged weak structure of the Chuzon supermarket which led to the death of at least five individuals.
— Inquirer.net

Bangko Sentral looks into Luzon earthquake’s impact on banks
The Bangko Sentral ng Pilipinas (BSP) is assessing the impact of the earthquake in Luzon on the banking sector.
— Rappler

Tugade says Clark airport to be fixed April 25 ‘at the latest’
PAMPANGA, Philippines – Transportation Secretary Arthur Tugade said the Clark International Airport will be restored by Thursday, April 25, at the latest.
— Rappler

Philippines could get more CoD casinos: Premium Leisure
A proposal to open more casino properties in the Philippines under the moniker ‘City of Dreams’ is under consideration.
— GGRASIA

DOJ: No basis to probe lawyers, journalists in ‘oust Duterte’ matrix for now
MANILA, Philippines – Justice Secretary Menardo Guevarra said on Tuesday, April 23, that there was not enough basis “for now” for the Department of Justice (DOJ) to launch a probe into lawyers and journalists tagged in the supposed oust Duterte matrix plot claimed by Malacañang.
— Rappler

2nd ‘most wanted” in Zambo Sibugay nabbed
Police have arrested one of the most wanted persons in a manhunt operation in the province of Zamboanga Sibugay, an official said Tuesday.
— Philippine News Agency

Power supply in parts of Samar restored
POWER supply in some areas in Samar struck by the 6.5-magnitude earthquake has been restored, the National Grid Corp. of the Philippines (NGCP) said.
— The Manila Times

PNP to probe Duterte ouster plot
Police General Oscar Albayalde, Philippine National Police (PNP) chief, confirmed Tuesday that an investigation will be launched to validate the alleged participation of some journalists and a group of lawyers in the alleged ouster plot against President Duterte.
— Tempo

PH not scrapping tax perks, gov’t tells Japan investors
The head of the Duterte administration’s economic team has assured businessmen from Japan’s Kansai region that the pending second tax reform package aimed at rationalizing investors’ fiscal perks would be beneficial to both the government and the business sector.
— Inquirer.net

Recto: Senate building is safe, work resumes Wednesday
Senate employees can resume work on Wednesday as its building was declared safe after a magnitude 6.1 quake.
— Inquirer.net

Military, police officials in ‘Morong 43’ get reprieve
The Sandiganbayan has stood by its earlier decision allowing the seven military and police officials to seek the outright dismissal of their case in connection with the alleged illegal detention and torture of 43 health workers in Morong, Rizal in 2010.
— Manilastandard.net

Boao Forum meeting participants voice need for closer links, cite risks
FOREIGN AND LOCAL delegates at the 2019 annual conference of the Boao Forum for Asia called for closer development coordination among peers, building on China’s Belt and Road initiative and the Regional Comprehensive Economic Partnership, in order to resist a wave of protectionism threatening the rules-based multilateral system.
— BusinessWorld Online

PNP readies report against ‘childish’ mayor over police chief’s reassignment
THE Philippine National Police (PNP) is preparing a report against a certain “childish” mayor in Metro Manila for allegedly removing the police hotlines in his city after he was not informed that its chief of police has been assigned to another position, General Oscar Albayalde said on Tuesday morning.
— The Manila Times

‘Childish’ Marikina mayor slammed for withholding funds for police
Marikina Mayor Marcelino Teodoro was slammed by the Philippine National Police (PNP) for withholding funds intended for local police only because he was not told the city’s former top cop was being promoted and assigned to another post.
— Rappler

Thieves strike at Baguio Cathedral during Easter mass
BAGUIO, Philippines – Easter Sunday masses are filled to the rafters with the Baguio Cathedral being no exception, but this did not stop two people from stealing a large TV from the church premises on Sunday, April 21.
— Rappler