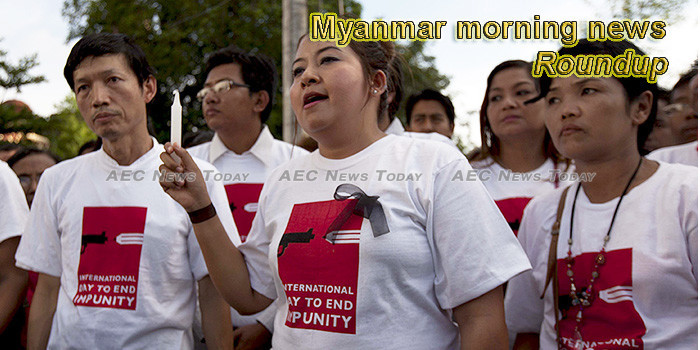 Rights group casts doubt on island relocation plan for refugees
A global rights group has cast doubt on Bangladesh’s claims that thousands of Rohingya refugees are ready to move to a new island site that critics say is prone to natural disasters.
— Mizzima

About $880m earned from maritime trade in two week this FY
Maritime export earnings have reached about US$880 million over two weeks of the current 2019-2020 fiscal year, exceeding over US$17 million compared to the same period of last fiscal year, according to figures from the ministry of commerce.
— Eleven Myanmar

Union Minister U Thant Sin Maung attends ASEAN ministers meeting on telecoms, IT
Union Minister for Transport and Communications U Than Sin Maung attended the 19th ASEAN Telecommunications and Information Technology Ministers Meeting and Related Meetings (TELMIN) in Vientiane, the Lao People’s Democratic Republic, on 24 and 25 October.
— The Global New Light of Myanmar

Myanmar rebels say government attacked personnel they abducted
An ethnic guerrilla army in Myanmar said Sunday that some of the several dozen soldiers, police and civilian officials it abducted from a ferry were killed in a subsequent attack by government helicopters.
— The Japan Times

From Myanmar, with blood: The Singaporean fighting tradition to take the martial art of lethwei to the world
The young men – some just boys – are lean and muscular. Sweat drips off them as they jostle and jab in the fading light.
— CNA

Myanmar Objects to Bangladeshi Minister’s Remarks Over Rohingya at NAM Meeting
International Cooperation Minister U Kyaw Tin strongly objected to Bangladesh’s labeling of the Rakhine issue as ethnic cleansing and genocide during a ministerial meeting of the Non-Aligned Movement (NAM) in Baku.
— Irrawaddy

E-commerce threat for Myanmar’s jade
As if human rights abuses, corruption charges and deadly landslides haven’t hurt the industry enough, Myanmar’s multi-billion-dollar jade and gemstone industry now has to deal with the challenges of e-commerce.
— The Asean post

Tatmadaw rescues 14 abductees from AA group
Tatmadaw transport and armed helicopters managed to rescue 14 persons in hours after some people were abducted by AA armed group, according to the report of the Office of Commander-in-Chief of Defence Services.
— The Global New Light of Myanmar

Indonesia, Myanmar Celebrate 70 Years of Diplomatic Ties
Indonesia and Myanmar celebrated 70 years of diplomatic relations by holding a diplomatic reception and a food festival at the Indonesian embassy in Yangon.
— Tempo

UBP won’t intend to take part in constituencies having more than half of ethnic people
The Union Betterment Party, which was founded by Ex-general and former Lower House Speaker Thura Shwe Mann, will not intend to participate in the constituencies where more than half of ethnic people are residing, said Tin Maung Oo, an organizing in-charge of the UBP representing Yangon Region.
— Eleven Myanmar

Arakan Army Trains Fighters to Oppose Myanmar’s Military
In Myanmar, several hundred young people kick up dirt as they run early one morning along a dusty path. They are preparing to join groups such as the Arakan Army (AA), which operates training camps in the northern state of Kachin.
— VOA

Union Minister U Kyaw Tin delivers Statement at 18th Summit of Non-Aligned Movement held in Baku
Union Minister for International Cooperation U Kyaw Tin participated at the 18th Summit of the Non-Aligned Movement held in Baku, Azerbaijan from 25 to 26 October 2019 and delivered a statement in the debate of the Summit on 26 October 2019 calling for the need for all member states to safeguard and abide by the.
— The Global New Light of Myanmar

Government discusses resettlement programme for displaced civilians in Rakhine
Union Minister for Social Welfare, Relief and Resettlement Dr Win Myat Aye held a coordination meeting at the building of Rakhine State government yesterday to provide humanitarian aid to the civilians who fled their homes due to armed conflicts in Rakhine State and the resettlement of internally displaced persons from the Maungtaw violence in 2017.
— The Global New Light of Myanmar

Poppy production and growing declines
Poppy growing area declined by over nine per cent and the poppy production, by over five per cent nationwide, according to the Ministry of Home Affairs.
— Eleven Myanmar

Myanmar on the cusp of another revolution – but this time it’s about wine
There’s a reason the world’s best wines are produced in France, California, and the handful of other sun-kissed regions we all know and love. It’s because they’re the only places with the kind of climate, soil and culture needed to grow great vines.
— Irish Times

Revamping school in Myanmar
Members of KB Kookmin Card’s management and labor pose after taking part in a week-long volunteer program held in Shwepyithar, in the outskirts of Yangon in Myanmar, Oct. 26.
— Korea Times