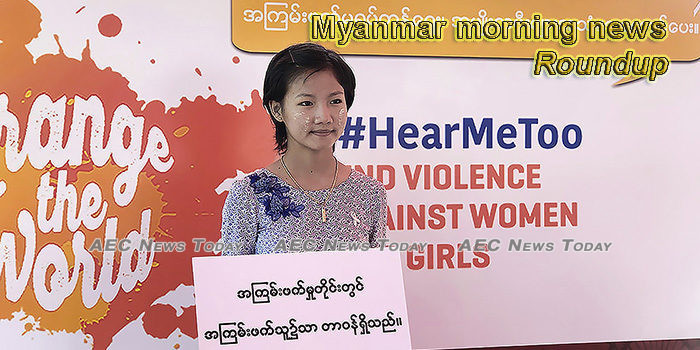 Local e-commerce firms call on govt to ease regulations
Online sales at Shop.com.mm on November 11 – the Chinese shopping holiday known as 11.11 – tripled compared to last year, according to Myanmar’s largest e-commerce platform, and it sold more than 30 times the usual daily volume of goods.
— Myanmar Times

Myanmar Tycoon Open to Foreign Investment in Wake of Ayala Deal
Myanmar tycoon Win Aung is open to foreign investment in the listed industrial-estate provider he oversees, following Ayala Corp.’s tie up with a firm traded on the nation’s fledgling stock exchange.
— Bloomberg

China’s mobile missiles on the loose in Myanmar
Myanmar’s seizure last week of a large cache of mostly Chinese weapons from a rebel camp sparked a brief and predictable flurry of nationalist outrage, underscoring as it did the shadowy role of neighboring China in fueling the nation’s many long-running ethnic conflicts.
— Asia times

Kachin people invited to take part in boosting state’s economy
As part of renewed efforts to boost Kachin State’s economy, shares in the the Kachin Entrepreneurs Public Company (KEPC) will be sold to the public, senior members of the state’s business community have told Myanmar Times.
— Myanmar Times

Myanmar sets up special legal unit as Rohingya cases loom
The unit will provide advice on international criminal justice as government prepares to defend itself at The Hague.
— Aljazeera

Group Says 92,500 Civilians Displaced by Fighting in Myanmar’s Rakhine State
More than 92,500 civilians have been displaced by armed conflict in Myanmar’s Rakhine state, where hostilities between Myanmar forces and the rebel Arakan Army have raged for a year, according to a tally issued Wednesday by a nonprofit organization that promotes ethnic rights.
— Radio Free Asia

Land bank to go online
Myanmar’s land bank will be fully digitalised and online access given to investors applying for land on which to do business in the country,” said U Thaung Tun, chair of Myanmar Investment Commission.
— Myanmar Times

Govt seeks to adopt treaty on ending child labour
The government will seek the approval of the Pyidaungsu Hluttaw (Assembly of the Union) to adopt an international treaty that will compel the country to stop the use of child labour.
— Myanmar Times

Prudential receives licence to operate in Myanmar
Prudential Corporation Asia has received a life insurance licence from the Ministry of Planning and Finance (MoPF) of Myanmar, the insurer has announced in a statement.
— Insurance Business Mag

White peanut markets open with stable price in central Myanmar
Although the white peanut market receives China’s high demands, the prices are still freezing in Monywa market according to U Thein Oo, an owner of Myanmar Thein Depot.
— The Global New Light of Myanmar

Mandalay attracts over half a million tourists
More than 500,000 foreign tourists visited Mandalay Region in the first 10 months of the year, topping last year’s annual figures, a senior official of the Directorate of Hotels and Tourism in Upper Myanmar said.
— Myanmar Times

Bangladesh Court Sentences Seven to Death for 2016 Cafe Attack
Court in Dhaka sentences seven Islamist militants to death for their role in attack on the Holey Artisan cafe in 2016, which killed 22 people, mostly foreigners.
— Irrawaddy

2,900 Homes for Myanmar Refugees Built with Japan Support
A ceremony was held in eastern Myanmar to mark the completion of 2,900 homes built under a reconstruction support project by the Nippon Foundation, a Japanese charity group, for refugees and other victims of ethnic conflicts in the Southeast Asian country.
— Nippon

Over 37M Eligible Voters in Myanmar; Lists for 2020 Poll Not Yet Complete, UEC Says
Myanmar’s Election Commission says there are more than 37 million eligible voters in the country; agency is still trying to register voters in 5 townships in Wa region.
— Irrawaddy

In teeming Yangon, Myanmar, a young couple makes their mark
Rabbi Schneur and Yehudis Raitport arrived in the bustling Southeast Asian metropolis of Yangon, Myanmar, on a Monday in late 2018.
— JNS

Nothing to celebrate at Kachin Thanksgiving
Four score minus seven years ago, on Abraham Lincoln’s birthday, the leaders of four of Myanmar’s main ethnic groups — the majority Burmans, plus Kachin, Chin and Shan — committed to creating a country conceived in liberty, and dedicated to the proposition that all people are created equal.
— Bangkok Post

More Efforts Needed to End Violence Against Women in Myanmar
The Irrawaddy talks to government and civil society representatives about a 16-day campaign to end violence against women and efforts to confront these issues in Myanmar.
— Irrawaddy

This week’s Myanmar morning news feature photo focus on International Day for the Elimination of Violence against Women, November 25.