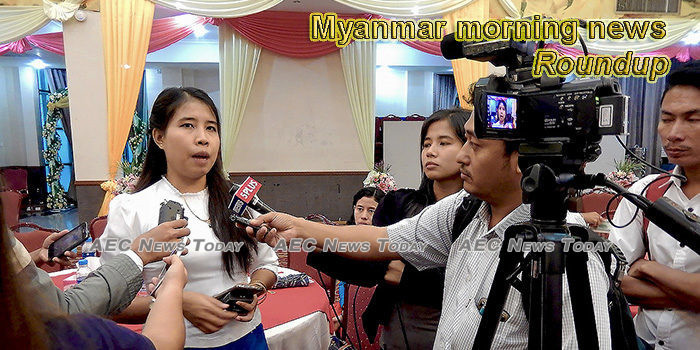 Parliament agrees to condemn AA kidnapping
Myanmar’s Union Parliament on Monday agreed to a proposal on condemning the abduction of an ethnic parliamentarian in western Chin state and demanding unconditional release of him, Xinhua reported.
— Mizzima

Magway to host Youth All-Round Development Festival next month
Deputy Minister for Information U Aung Hla Tun presided over a coordination meeting at the ministry in Nay Pyi Taw yesterday morning to organize a youth development festival in Magway next month.
— The Global New Light of Myanmar

Digitalisation will boost savings culture in Myanmar: expert
The prevalence of cash transactions and smart phone ownership in Myanmar provides an attractive opportunity for the spread of digital savings services to underserved or unserved households, a UN expert says.
— Myanmar Times

Will cases brought against Myanmar deliver justice to Rohingya?
Genocide case filed at ICJ and Suu Kyi named in lawsuit in Argentina while ICC set to investigate Rohingya crimes.
— Aljazeera

UN Top Court Sets Hearing Date For Gambia’s Case Against Myanmar
The U.N.’s top court will open hearings in December on a case filed by Gambia accusing Myanmar of state-sponsored genocide for the brutal military-led crackdown against Rohingya Muslims, the court said in a statement issued Monday.
— Radio free Asia

Families Question Myanmar Military’s Detention of Rakhine Civilians, Monk
Three civilians, including one monk, detained by the military in Rakhine State in September haven’t been heard from since and their families aren’t allowed to visit them.
— Irrawaddy

State Counsellor Daw Aung San Suu Kyi receives German Ambassador to Myanmar
Daw Aung San Suu Kyi, State Counsellor and Union Minister for Foreign Affairs, received Mr Thomas Karl Neisinger, Ambassador Extraordinary and Plenipotentiary of the Federal Republic of Germany to the Republic of the Union of Myanmar, at 09:00 am on 19 November 2019 at the Ministry of Foreign Affairs in Nay Pyi Taw.
— The Global New Light of Myanmar

NGOs seeks gentler law for sex workers
Nearly 30 non-governmental organisations are seeking to amend the country’s prostitution law to make it more responsive to the needs of sex workers, one of the groups’ leaders said.
— Myanmar Times

UN court to hear Myanmar genocide case in Dec
Gambia will open its case against Myanmar before the UN’s top court in December accusing the mainly Buddhist state of genocide against its Rohingya Muslims, the tribunal said Monday.
— Protho malo

Myanmar Rohingya: Will Omar get justice for his murdered family?
Sitting on the floor of his makeshift school in the sprawling refugee camp of Cox’s Bazar in Bangladesh, 11-year-old Omar spoke softly as he remembered his mother and father.
— BBC

Myanmar: The drive to teach in a conflict affected area
“I found happiness in teaching as I can share my knowledge with children who are starving for education, especially when I see the smiles on the students’ faces when they are learning in the classrooms. I want to improve my teaching skills as much as I can.”
— Reliefweb

Govt says Bangladesh holding up repatriation
The Myanmar government has urged Bangladesh to abide by their bilateral agreement on the repatriation of the more than 700,000 refugees from Rakhine State living in cramped camps in Cox’s Bazar.
— Myanmar Times

Q&A: Ed Brea, Managing Director of Rosewood Yangon
Ed Brea has run many prestigious properties across the world, especially in Asia. With his 40 years of experience in the luxury hotelier industry, Mr. Brea has an interesting story to pitch in.
— Myanmore

Nay Pyi Taw authority to sell cheap land to boost population
Nay Pyi Taw Development Committee says it will sell nearly 200 empty plots in Nay Pyi Taw to the public at a reduced price in an effort to encourage people to live in the country’s capital.
— Frontier Myanmar

Kalaw run set to draw hundreds
“I always loved running… it was something you could do by yourself and under your own power. You could go in any direction, fast or slow as you wanted, fighting the wind if you felt like it, seeking out new sights just on the strength of your feet and the courage of your lungs.”- Jesse Owens, Four-Time Olympic Gold Medalist.
— Myanmar Times