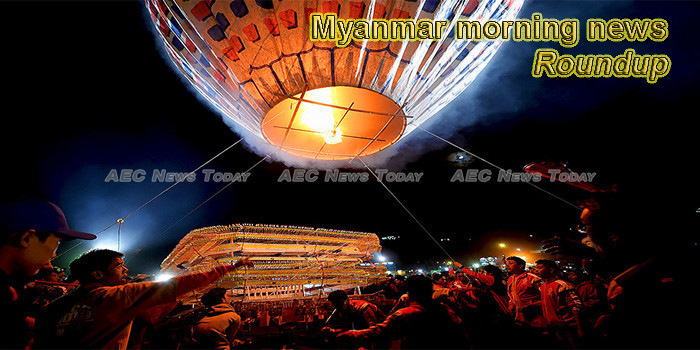 57 countries sue Myanmar over reported genocide of Rohingya in historic lawsuit
Fifty-seven nations are suing Myanmar at the International Court of Justice, alleging in a historic lawsuit that the government has conducted genocide against its Rohingya minority.
— ABC News

Cabinet to adopt development guideline for Dawei SEZ link
The National Economic and Social Development Council (NESDC) will ask the cabinet to adopt its guidelines on infrastructure development on Tuesday, as the government seeks to start working on the long-awaited link that will connect the Dawei Special Economic Zone in Myanmar with Eastern Economic Corridor (EEC).
— Bangkok post

External trade touches $3.19 bln in one month
Myanmar’s external trade as of 1 November in the current fiscal year reached US$3.19 billion, an increase of $417 million compared to the corresponding period of the 2018-2019 fiscal year, according to the Ministry of Commerce.
— The Global New Light of Myanmar

Gambia files Rohingya genocide case against Myanmar at UN court
Myanmar is to face accusations of genocide at the UN’s highest court over its treatment of Rohingya Muslims.
— The Guardian

Ministry seeks to cut fine for stamp duty scofflaws
The Ministry of Planning and Finance has submitted a bill to the Pyidaungsu Hluttaw (Assembly of the Union) that is set to reduce the fine for businesses that fail to pay stamp duties.
— Myanmar Times

Thailand, Myanmar can learn from Manila’s move on its restive south
THE insurgents in southern Thailand who killed 15 people (including a police officer and several village defence volunteers) last week served a grisly, but timely, reminder that the region remains a restive and dangerous place.
— Business Times

Six protesters detained during State Counsellor’s Mogok visit
Six people were detained for protesting during a visit by State Counsellor Daw Aung San Suu Kyi to Mogok in Mandalay Region on Saturday but were released after the Myanmar leader left.
— Myanmar Times

Kevin Fitzsimmons: Myanmar’s aquaculture potential on par with Thailand
The government of Myanmar has targeted aquaculture as a solution to widespread malnutrition and rural poverty in the Southeast Asian nation.
— Seafood Source

Some MPs say constituents are left out of education project
Some members of parliament are seeking an explanation from the Ministry of Education about the selection process of schools included in an education project funded by a World Bank loan.
— Myanmar times

Canada supports genocide case against Myanmar at International Court of Justice
Veteran politician Bob Rae says he will return as Canada’s special envoy for Myanmar to help build support for a genocide lawsuit against that country’s government over its forced expulsion of more than 700,000 Rohingya Muslims.
— The Star Online

Sedona brings its Symphony High Tea Buffet toYangon
With the Tazaungtine holidays coming, we know that our readers are searching for places to chill and experience some fine dining. Sedona will be the perfect spot to unwind, in the company of family and friends, or with that someone special.
— Myanmar Times

For Myanmar’s young women, tourism provides a way out of poverty
“The plan was always to keep moving up,” says 39-year-old Ae Ae Phyo Aung, her English clear and precise. “That’s why I went to work in Doha and Dubai.”
— South China Morning post

Ooredoo Myanmar: 5 things to get right if you want to be a great place to work
Transparent leadership, culture of collaboration, and management excellence, these are among the things that helped Ooredoo Myanmar win with people, affirms Human Resources Director, Htet Min Aung.
— Human Resource Online

Landslides expected due to cyclonic storm ‘Bulbul’
The Meteorology and Hydrology Department has warned of possible rain-induced landslides in highland areas of Sagaing Region, and Chin and Rakhine states due to the influence of the cyclonic storm ‘Bulbul’, which is likely to weaken into a deep depression today, state media reported.
— Mizzima

The natural world needs our protection more than ever
Environmentalists have been warning us of the increasing global temperature for many years now.
— The Global New Light of Myanmar

Mandalay celebrates Tazaungdine Festival
Yesterday was Fullmoon of Tazaungmone also known as Samannaphala Sutta Day and according to tradition townships in pagodas and congregation halls in townships of Mandalay Region were thronged with people lighting up pagodas and Buddha images with oil lamps and electric lights while Matho Robe Weaving Contests and offering of Matho Robes were conducted in.
— The Global New Light of Myanmar