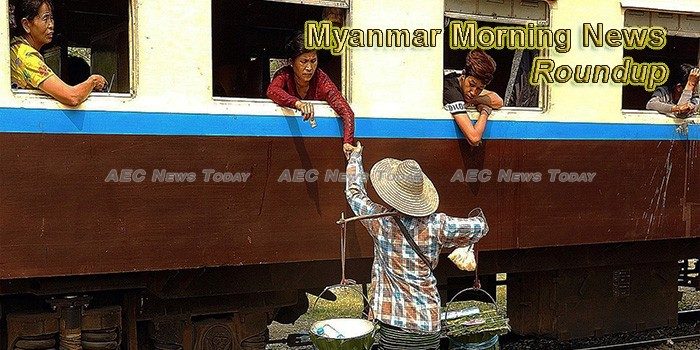 Myanmar workers beat libel charges
The Criminal Court Thursday acquitted 14 Myanmar workers of a defamation charge filed by their previous employer, which claimed they had made false complaints about poor treatment by the company.
— Bangkok Post

US slaps visa sanctions on Myanmar officials
he United States has restricted visas for some Myanmar government officials for their lack of cooperation in accepting Myanmar citizens deported by the US.
— Myanmar Times

Thai Court Dismisses Charges Against Myanmar Workers in Landmark Case
A court in Bangkok on Wednesday dismissed criminal defamation charges against workers from Myanmar who had accused a chicken farm of abuses, in a landmark ruling seen as a rare victory for migrant workers’ rights in Thailand.
— The Irrawaddy

Shut down of Moehti Moemi gold mine helps no one: company
The government’s suspension of the Moehti Moemi gold mining concession had affected the lives of 5000 company workers, and had cost the government between 26.6 kilograms and 53.2kg of gold in lost monthly revenue, U Soe Tun Shein, chairman of National Prosperity Co Ltd, which operated the concession, said at a press conference last Friday.
— Myanmar Times

Noted Myanmar Environmentalist Dies
U Ohn, a devoted environmentalist, died on Wednesday of natural causes at the age of 91 at his residence in Yangon’s Mayangone Township, according to his family members.
— The Irrawaddy

National solidarity should be built through equality, not military pressure – KNU says
National solidarity should be built in the union through freedom, equality, and justice between the ethnic people and not through military pressure and force, said the Karen National Union (KNU) chair General Mutu Say Poe in his speech on the first day of the Union Peace Conference – 21st Century Panglong held at MCC-2 Hall in Naypyidaw on Wednesday (July 11).
— BNI Online

Empowering through sexual health knowledge
At a training centre for women in Yangon, adolescent girls who have experienced trafficking, abuse and sex work, or have been detained for juvenile offences, learn to understand their bodies and protect themselves from HIV and other sexually transmitted infections.
— Frontier Myanmar

Panglong opens; leaders call for peace process to move forward
The third round of the 21st Century Panglong Conference began on Wednesday, with the ruling party chair and Tatmadaw (military) chief both calling for the peace process to move forward and urging all armed ethnic groups to sign the Nationwide Ceasefire Agreement (NCA) soon.
— Myanmar Times

RCSS clashes with Tatmadaw
While the third 21st Century Panglong Conference is being held in Naypyitaw, the Restoration Council of Shan State (RCSS) which has signed the Nationwide Ceasefire Agreement (NCA) reportedly clashed with the Tatmadaw (Myanmar military).
— BNI Online

Military chief promises no sound of guns if all groups wishing for peace observe agreement
Commander-in-Chief of Defence Services Senior General Min Aung Hlaing said all should be aware that the military is actively working together with the government for Myanmar’s peace efforts not because it is weak, and there would be no sound of guns if all groups with the true wish for peace observe the prescribed agreements, the Office of the Commander-in-Chief reported.
— Eleven Myanmar

Three lives in Hpakant
The jade industry at Hpakant in Kachin State is a multi-billion-dollar business in which risk flows downhill, from the company bosses to the mid-level traders and, at the bottom, the itinerant miners known as yemase who risk their lives each day in the hope of striking it rich.
— Frontier Myanmar

Myanmar Opens New Round of Delicate Peace Talks With Ethnic Armies
The Myanmar government opened the third round of its key peace talks on Wednesday in the latest attempt to make headway with its goal of forging lasting peace in the country after seven decades of armed conflict and strained relations with ethnic minority groups.
— Radio Free Asia

Refugee Teen From Myanmar Drowns in Kansas City-Area Lake
A teenage refugee from Myanmar who recently arrived in the U.S. with his family has drowned in a lake near Kansas City.
— Associated Press