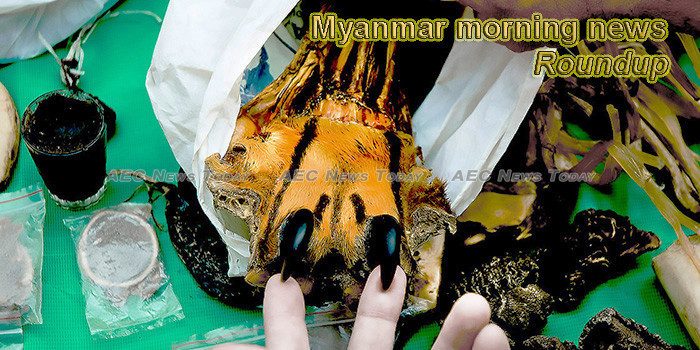 Over 80pc of social investments in microfinance: report
Social investment in Myanmar has increased but there is still a need to further deployment of capital, the Singapore-based Asian Venture Philanthropy Network (AVPN) says.
— Myanmar Times

US Foreign Affairs Committee urges State Department to label Myanmar atrocities ‘genocide’
The U.S. House of Representatives Committee on Foreign Affairs urged the U.S. State Department to label the atrocities committed against the Rohingya by the Burmese military a genocide, according to an announcement released yesterday on their website. A bipartisan group of members, led by committee chairman Representative Eliot L. Engel of New York, sent a
— Coconut

Border trade with Thailand hits nearly $1.3 bln
Bilateral border trade between Myanmar and Thailand between 1 October 2018 and 15 February 2019 totalled US$1.29 billion, with exports worth $ 926.9 million and imports worth $ 372.6 million, according to the official’s statistics issued by the Ministry of Commerce.
— Global Newlight of Myanmar

Govt, investors must give and take for more oil and gas profit: expert
Prospects in the Myanmar oil and gas sector are expected to improve this year, with the government planning to hold its first international exploration and production tender since 2015 next month.
— Myanmar Times

Myanmar army accuses AA troops of impersonating their forces
Myanmar’s military is warning citizens in war-ravaged Rakhine state that members of the rebel Arakan Army (AA) are impersonating government troops in a scheme to smear the government , RFA reported.
— Mizzima

Kachin Armed Group Asks UN to Correct Opium Claims
The Kachin Independence Organization (KIO) has asked the UN Office on Drugs and Crime (UNODC) to correct a recent report that claims areas under the armed group’s control have some of the highest concentrations of opium cultivation in the country.
— The Irawaddy

Myanmar to burn seized wildlife parts at Yangon Zoo
The government will burn elephant tusks and other wildlife parts worth US$1.1 million (K1.66 billion) that were seized over the past year, a senior Forest Department official said.
— Myanmar Times

Yangon gripped as big-budget blockbuster brings streets to standstill
Cars dangling from cranes, street shootouts and actors rappelling from roofs — Yangon residents were transfixed this week by the filming of a big-budget Hong Kong action movie around the city’s iconic Sule pagoda.
— Mizzima

Govt must make a calculated leap to keep up with digital age
With the advancements in communications technology, the world has become a global village that allows its inhabitants to connect with each other faster than ever. We can send images, audio, and text to people far away from us. However, this technology needs to be equally accessible to all countries if we are to progress further together.
— Global Newlight of Myanmar

Mine Explosion Kills Two Police Officers in Myanmar’s Rakhine State
Two police officers were killed, and two others were injured when vehicles in a police convoy hit a mine on Wednesday along the main road in Ponnagyun township of Rakhine state, local residents and law enforcement authorities said, in the latest bout of violence in Myanmar’s volatile western region.
— Radio Free Asia

Commentary: Why Myanmar Must Develop an Identity of Inclusion
Khin Mai Aung reports from the International Conference on Protection and Accountability in Burma, which called attention to the ongoing human rights violations against Rohingya muslims and other religious minorities in the Buddhist-majority country of Myanmar.
— Lion roar

What to see, do and eat in Myanmar
Start your evening in style and channel your inner Orwell with an Old Fashioned at Sarkies Bar in the Strand Hotel. Or try a flight of craft beer at Burbrit, Yangon’s (formerly Rangoon) first microbrewery.
— Standard

Letter: Authorities should call on China to end Yongbang fiasco
The Yongbang Special Economic Zone (SEZ) fiasco shows how shady blockchain companies are using technological naivety and ‘FOMO’ – fear of missing out – over blockchain to drive up the worth of their associated cryptocurrency (Yongbang Coin in this case).
— Myanmar Times

Rohingya And Burmese Minority Groups Call For New EU Sanctions Against Military Businesses In Myanmar – Statement
We welcome the recent EU Trade delegation to Myanmar as part of a process to review the existing Everything But Arms (EBA) agreement.
— Eurasia Review

Myanmar records 1 victim, 1,300 patients of Measles
An official from the Public Health Department declared that the escalating measles outbreak has left about 1,300 patients with one victim through Myanmar as of mid-February this year.
— Menafn

Surfers ride the wave of ocean action in Myanmar blue forest
Ocean lovers are often left out of the bigger environmental discussions and so struggle to see how they can do their part to stop climate change.
— Global Newlight of Myanmar

Four sentenced in robbery, death of university student
Three men and a juvenile convicted of involvement in the murder of a university student during a robbery in Mandalay last year were sentenced to death or imprisonment by district and township courts on Wednesday.
— Myanmar Times

Farmers fenced out of land in South Dagon
A month after soldiers and workers turned up and fenced off their fields, farmers in South Dagon were still trying to learn who or what is behind the apparent land grab.
— Frontier Myanmar

Philippines offers citizenship for Rohingyas
Philippines president Rodrigo Duterte offered Filipino citizenship to the Rohingyas as he reiterated his willingness to accept them in his country.
— New age bd