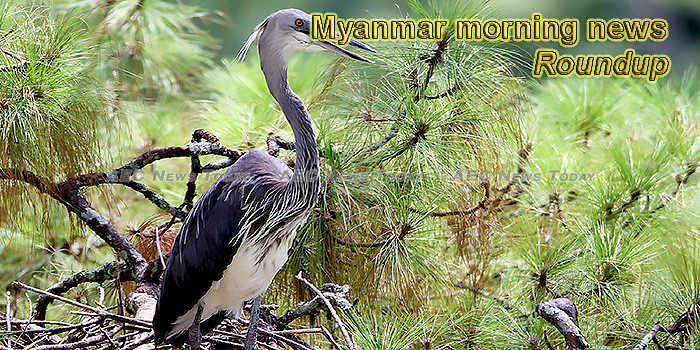 Oil and gas sector stands top FDI list
From 1988-1989 FY to 2018-2019 FY, the government gave the greenlight to 1725 investments worth over 80.234 billion USD, with the oil and gas sector topping the list, according to the figures released by the Myanmar Investment Commission (MIC).
— Eleven Myanmar

Bangkok Airways expresses interest in opening routes to Bagan
Bangkok Airways, a Thai regional airline, is interested in opening a direct route between Bangkok and Bagan, which has just been accorded the World Heritage Site status by UNESCO.
— Myanmar Times

Myanmar exports over $1.6 mln metric tons of rice as of 14 June
Over 1.68 million metric tons of rice and broken rice were exported to foreign countries in the eight and half months of current fiscal year, earning US$512.47 million, according to Myanmar Rice Federation (MRF).
— The Global New Light of Myanmar

Low-cost housing problems at Yuzana
Apartments in the Yuzana housing project, a low-cost residential complex in Yangon’s Dagon Seikkan township, first went on sale to the public in March 2016. The project was developed by the Department of Urban and Housing Development (DUHD).
— Myanmar Times

Master Plan Prepared For Chinese-Backed Kachin Economic Zone: State Minister
A feasibility study and deep discussions between Kachin State officials and a Chinese company are now underway, despite criticisms over a lack of transparency.
— Irrawaddy

UEC, IRI sign MoU on promoting inclusiveness in 2020 general elections
Union Election Commission-UEC and International Republican Institute-IRI signed an MoU on promoting inclusiveness in the 2020 general elections yesterday at the UEC office in Nay Pyi Taw yesterday. The signing ceremony was attended by Chairman U Hla Thein and members of the commission and officials from the UEC office.
— The Global New Light of Myanmar

Start-up offers a Myanmar solution for betel-chewers
If you’ve walked around Yangon, you would have noticed red stains on the streets and walls and seen people spitting red juice that resembles blood from buses, cars, or while walking. These are the bad habits of betel nut chewers, which the country is trying to eradicate.
— Myanmar Times

Commerce Dy Minister attends trade meetings in Geneva, Switzerland
A Myanmar delegation led by Deputy Minister for Commerce U Aung Htoo attended fifty-third annual meeting of the Joint Advisory Group (JAG) on the International Trade Centre (ITC) on 2 July and 7th Global Review of Aid for Trade 2019 meeting and related meetings from 3 to 5 July in Geneva, Switzerland.
— The Global New Light of Myanmar

Can Myanmar attract more tourists?
Eased visa requirements for citizens from six countries are the latest in a string of visa relaxation policies that Myanmar has rolled out in a bid to boost tourism amidst fall-out from the ongoing Rohingya crisis.
— The Asean Post

Four Palaung in Military Detention Two Weeks and Counting
Despite pleas from civil society organizations and the detainee’s own parents, four Palaung youths in northern Shan State–two fresh out of the monkhood–remain in custody.
— Irrawaddy

Three Chinese dead from accident in Pyawbwe
Three Chinese citizens were found dead while one was seriously injured in an accident while connecting the national power grid in Pyawbwe Township, Mandalay Region on July 6, sources said.
— Eleven Myanmar

Two Dead in Rakhine Border Post Attack
An unknown group of assailants ambushed a security border post in northern Maungdaw Township Sunday, killing two. No one has yet claimed responsibility for the attack.
— Irrawaddy

Homes Set Ablaze After Fighting in N. Rakhine
Amyet Taung residents, in Rakhine State’s Rathedaung Township, have fled, accusing the Tatmadaw of burning down their homes–accusations the Tatmadaw denies.
— Irrawaddy

IC submits Myitsone dam report to president, but no reply comes out from govt
A report on multi-billion dollar Myitsone dam submitted to the president by the Investigation Committee of Myitsone Dam has been long over one year, but no reply as of yet from the government, said Dr. Khet Aung, Kachin Chief Minister, who is also a member of the Investigation Committee of Myitsone Dam.
— Eleven Myanmar

Shan in Karen State ‘Have Someone to Help Them’
Ethnic Shan lawmaker launches bid to establish a Shan ethnic affairs minister constituency in the Karen legislature.
— Irrawaddy

Myanmar thanakha products to be exhibited at Thai expo
The Myanmar Thanakha Planters, Producers, and Exporters’ Association will display and sell thanakha products (paste, logs, stumps) at the Thailand Natural Product expo in Bangkok, according to U Kyaw Moe, the president of the association.
— The Global New Light of Myanmar