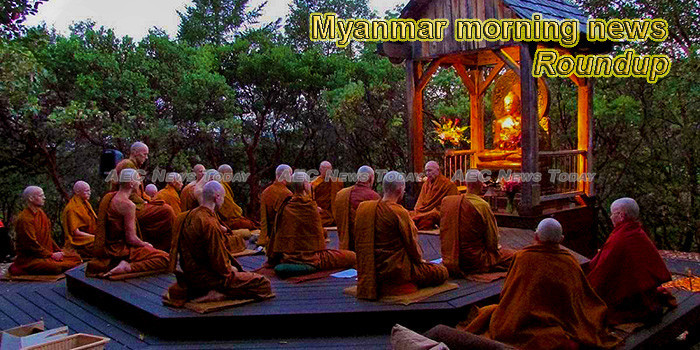 US Targets Myanmar Military Leaders Over Rohingya Killings
The United States has announced restrictions on Myanmar’s military Commander-in-Chief and other military leaders over the killings of Rohingya Muslims in 2017.
— VOA

Suu Kyi’s bid to reform charter sparks rival protests in Myanmar
Hundreds of people demonstrated in Myanmar’s largest city, Yangon, on Wednesday in support of proposed constitutional amendments that would reduce the power of the military.
— Reuters

PTT’s expansion plans in Myanmar
PTT Oil and Retail Business (PTTOR) is poised to invest in the Burmese retail market and the construction of a tank depot for oil and liquefied petroleum gas as well as related facilities in Myanmar. The Thai petro-chemical company’s chairman Attapol Rerkpiboon says the first gas station will open in Q4 this year.
— The Thaiger

Faster implementation of power projects needed in Chin State
The Chin State government wants to prioritise a number of hydropower projects in order that more development can come to the state, which is the poorest in the Union.
— Myanmar times

Injecting new life into Yangon Stock Exchange
THE Yangon Stock Exchange (YSX) will be the last of the region’s markets to open up to foreign investors. The normally tight-lipped Yangon market regulator announced on July 12 that it would allow foreigners to own shares of companies listed on the bourse.
— The Business Times

Gas export value in nine months falls by over US$32 m this year
Over US$2.7 billion was earned from export of natural gas in more than nine months of the current fiscal year falling by over US$32 million compared to the same period of last year, according to the Ministry of Commerce.
— Eleven Myanmar

US Sanctions Hurt Military Dignity: Spokesperson
What, beyond vanity, the sanctions may materially mean remains to be seen. “The leaders don’t travel to the US, and they need not travel there,” a spokesperson said.
— Irrawaddy

Dung and Dragons: Myanmar kids dodge cows to play rugby
Sidestepping cowpats and garbage, Myanmar’s only home-grown junior rugby side train on the outskirts of Yangon, preparing to take on children from the city’s well-heeled international schools.
— France 24

Horse-cart tours expand, price rises in Inwa
Horse-cart tours will be improved and and fees will increase for foreign tourists at the ancient city of Inwa in Tada-U township, Mandalay Region, starting August 1.
— Myanmar times

Charter reform bid sparks protests in Myanmar
Hundreds of people demonstrated in Myanmar’s largest city, Yangon, yesterday in support of proposed constitutional amendments that would reduce the power of the military.
— Gulf Times

13 H1N1 deaths reported in Myanmar within 4 days
A total of 13 more deaths by A(H1N1) pdm 09 influenza have been reported in Myanmar over the past four days, according to the figures released by the public health department under the ministry of health and sports Wednesday.
— Xinhua

Myanmar must face the music
These latest sanctions on Myanmar’s military leaders should be lauded as the right move.
— dhakatribune

Myanmar groups stage protests at S’pore embassies
Dozens of Myanmar nationals staged a series of demonstrations in front of the Singapore embassies in Tokyo yesterday and Washington on Monday to protest against the Singapore Government’s arrest and deportation of leaders of the Arakan Association (Singapore).
— The Straits Times

Geek Girls Myanmar creates space for tech-savvy women
Like many of her peers who left Myanmar to work or study overseas, Ma Sandy Sein Thein, founder of Geek Girls Myanmar and managing director of Digital Kaway Co Ltd, was lured back home by the opportunity to contribute to the country’s growth and development.
— Myanmar Times

Constitution Amendment Supporters Rally in Cities Nationwide
Thousands gathered in cities across the country to support the recent report of the Charter Amendment Committee, which the military has declared unconstitutional.
— Irrawaddy

NRPC, KNPP hold peace talks in Nay Pyi Taw
National Reconciliation and Peace Centre Vice Chairman U Tun Tun Oo, who is also the Union Attorney-General, met with a delegation led by Khu Oo Reh, the leader of the peace implementation committee of the Karenni National Progressive Party, yesterday to discuss the peace process and the signing of the Nationwide Ceasefire Agreement.
— The Global New Light of Myanmar

Most of country’s tiger habitat ‘too dangerous to survey’
Only 10 percent of tiger habitat was included in the latest tiger population survey nationwide, according to the Wildlife Conservation Society-Myanmar.
— Myanmar times

Ethnic Parties, NLD at Odds over Pace of Military’s Exit from Politics
In proposed charter changes, ANP, SNLD and others call for immediate return to barracks, while the NLD suggests a gradual phasing out of the Tatmadaw from Parliament.
— Irrawaddy

State Counsellor attends dinner with authors in Yangon
State Counsellor Daw Aung San Suu Kyi participated in a dinner gathering with authors at the Novotel Hotel in Yangon yesterday. She greeted the authors warmly before the dinner, conversing on literature and then having a documentary photo taken together.
— The Global New Light of Myanmar

Secretariat to host Martyrs’ Day exhibition
To mark the Martyrs’ Day, the Secretariat will host a commemorative ceremony and exhibition on 19 July on Theinbyu Road, Botahtaung Township,Yangon Region, according to the Yangon City Development Committee.
— The Global New Light of Myanmar