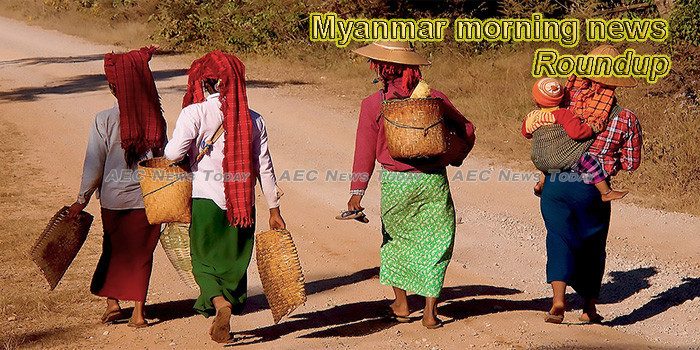 Traders hope for a boost from new gem laws
The new amendments to the law governing the extraction of gemstones in Myanmar are expected to offer relief for the gem industry in Mandalay.
— Myanmar Times

Myanmar asks EU not to revoke GSP
IN FEAR OF negative impacts on the nation’s growth and the grass root population over European Union’s potential withdrawal of its generalised scheme of preferences (GSP) from the country, Myanmar officials and businesses have requested the EU to reconsider the move.
— The Nation (very annoying popups)

Despite EU embargo, Tatmadaw buys European aircraft
The Tatmadaw has acquired civilian aircraft made by European companies despite a tightening of the arms embargo in response to alleged atrocities in Rakhine State.
— Frontier Myanmar

NLD calls bureaucracy ‘stumbling block’ in reforms
A spokesperson for the ruling party has blamed “some in the bureaucracy” for the country’s poor economic reform, saying excessive redtape is a “stumbling block in Myanmar’s democratic transition”.
— Myanmar Times

On Refugees… And Myanmar: It’s Not Just The Rohingya
The world now has more refugees than at any time since after WW2, more than the population of Britain. They are often the consequence of wars usually instigated by great powers directly or through proxies. Civil strife accompanied by the demonization of minorities, killing and expulsion is another reason. Such is the story of the Rohingya in Burma, or Myanmar as it now likes to be known.
— Modern Diplomacy

Border trade declines by more than six million USD in three months
From October 1 to December 28 of 2018-2019 fiscal year, the border trade volume reached USD 2135.078 million, down USD 6.04 million compared with the same period last year, according to the figures from the Ministry of Commerce.
— Eleven Myanmar

No alternatives to resettlement for Rohingya in Rakhine
For Ma Htwe, there is no other realistic option than to leave an internally displaced person’s (IDP) camp in Myanmar to join a government resettlement program.
— UCA News

40 mining blocks wait for recommendation from respective regions, states to operate
There are about 40 mining blocks waiting for recommendations from respective regions and states, but operation will be allowed only after contract signing and test running, said Min Min Oo, permanent secretary of the Ministry of Natural Resources and Environmental Conservation.
— Eleven Myanmar

Myanmar state ‘centre of global meth trade’
Myanmar’s Shan state is the epicentre of the global methamphetamine supply and the export of the illegal drug is about to get even easier, warns a new report from the Brussels-based International Crisis Group (ICG).
— The Straits Times

Rakhine Political Parties to Meet Over Myanmar Official’s Remarks on Ethnic Army
A Rakhine political party said Wednesday that it will hold a meeting in Rakhine state’s capital Sittwe to discuss a warning by a central government spokesman this week against support for the region’s ethnic military force following a deadly attack it conducted on police outposts.
— Radio Free Asia

Ethnic Cultural Festival to be held in Myanmar
The Myanmar Ethnics Culture and Tourism Promotion Festival will be held in Kyaikkasan Grounds from January 25 to 29 with the aim to promoting traditional culture and customs and tourism of each region.
— Eleven Myanmar

Hospital forced to buy rabies vaccine after running out
Magwe Region’s Chauk Township hospital has run out of the rabies vaccine as more and more people have been seeking treatment for dog bites, the hospital’s superintendent Dr Soe Win said.
— Myanmar Times

Jardine Group heralds 120th year in operations, commits to ASEAN investments
The company has a long track record in Southeast Asia, including in Myanmar, where it is operated under the Cycle & Carriage automotive brand. Cycle & Carriage distributes Mercedes Benz passenger cars in Myanmar, Singapore and Malaysia.
— Myanmar Times

Health Ministry receives K3 billion for research
The Ministry of Health and Sports has been allocated K3 billion (US$1.9 million) for research in its budget for fiscal year 2019-2020 to improve its clinical and public health services, especially in the areas of paramedics, nursing and midwifery.
— Myanmar Times

Asia’s first solar yacht launches in Myanmar
Burma Boating, a sailing firm owned by Myanmar tourism trailblazers Memories Group, has unveiled the latest acquisition to its fleet – the S55, a 16.7-meter solar-powered yacht, which will offer expeditions around the Mergui Archipelago from January 2019.
— Financial Times