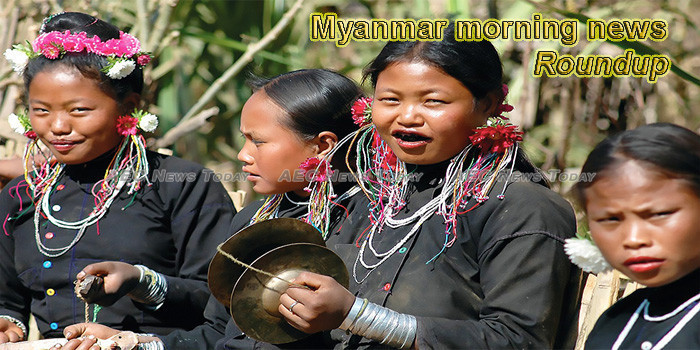 Rohingya activists slam ASEAN’s call for dialogue with Myanmar
Efforts by the Association of Southeast Asian Nations (ASEAN) to encourage “dialogue” between Rohingya refugees and the Myanmar government have sparked fierce criticism from Rohingya activists, who accuse the bloc of whitewashing the Myanmar military’s crimes and legitimising deeply flawed repatriation plans.
— Aljazeera

Royal capital to ‘smart city’: Myanmar’s Mandalay gets high-tech makeover, sparks ‘spy’ fears
Once a seat of kings, the city of Mandalay in northern Myanmar has seen turbulent chapters in its 162-year history – the fall of Burma’s last royal dynasty and decades of colonial rule. Now, officials are attempting to transform the former royal capital into Myanmar’s first “smart city”.
— Reuters

Yangon airport runway closed temporarily after a plane nose wheel breaks
Passengers said the nose wheel landing gear of a plane from Golden Myanmar Airlines broke forcing Yangon International Airport to temporarily close the runway for about one and half hours.
— Mizzima

ASEAN urges Myanmar to ensure security in Rakhine
ASEAN has called on the Myanmar government to guarantee the safety of the Rohingya community, both in the country and in exile, as the region’s foreign ministers push for more dialogue with the refugees in the ongoing repatriation process.
— The Jakarta Post

FLYDUBAI IS NOW FLYING DIRECT TO KRABI AND MYANMAR
Looking for a new vacation destination where the flights itself won’t cost a fortune? FlyDubai will be adding two new destinations to its network – Krabi Thailand and Yangon Myanmar, meaning cheaper flights.
— Ahlanlive

Automobiles to roll off new assembly line in Mandalay
Myanmar has been importing car parts and assembling them for years, but now Chinese cars will be produced here for the first time, at Myotha industrial zone in Ngazun township, Mandalay Region.
— Myanmar Times

President inspects Bagan World Heritage Site
President U Win Myint who was in Mandalay Region’s Nyaung U inspected the Bagan cultural heritage region which had been recently added to the World Heritage Site list, to preserve the region, develop travel business and create economic opportunities for the local people.
— The Global New Light of Myanmar

Myanmar, Italy sign MoU to cooperate in water management and mechanized farming
A ceremony to sign a Memorandum of Understanding (MoU) between Myanmar and Italy to cooperate in the water management in the farming sector and development of mechanized farming, was held in Nay Pyi Taw on August 2, according to the Ministry of Agriculture, Livestock and Irrigation.
— Eleven Myanmar

Are dams and coal-fired engines really detrimental to the environment?
By Khin Maung Myint Before proceeding further, I would like to make one thing very clear. I am neither a political activist nor a lobbyist nor an advocate for any social or government organization.
— The Global New Light of Myanmar

Myanmar’s Environmental Challenges
After eight years collecting dust on the planning shelves and also at the confluence of the Mali and N’mai Rivers in upper Burma, the Chinese are seeking to revive the Myitsone Dam, which has been stalled since 2011 after then-President Thein Sein, in an unprecedented about-turn, put it on hold amid massive protest.
— Asia Sentinel

The Day Dictator Ne Win Won Asia’s Nobel Prize
Fifty-nine years ago today, the ruthless military dictator Ne Win was awarded the Ramon Magsaysay Award. He refused it, believing it to be a tool of the American CIA.
— Irrawaddy

Time for a serious chat about Yangon’s colonial heritage
Frontier suspects that most self-respecting Yangon residents would not fancy either. Meal deals of this kind are also unlikely to ever be sold in the city. But Yangon’s most iconic building, the Secretariat, will soon be host to an unsavoury mix of historical remembrance and global consumer capitalism.
— Frontier Myanmar

Two wild elephants caught in Hlegu
Two elephants, that came in to cashew plantation near mile post (16/5) on Yangon-Mandalay expressway in Hlegu, were caught with tranquilizer gun in the morning of 3 August.
— The Global New Light of Myanmar

Football: AFF over-rules protests by Singapore, Myanmar, says Timor Leste’s U-15 captain Freitas is no age cheat
Timor Leste Under-15 captain Paulo Domingos Gali da Costa Freitas, who was accused of being overaged last week at the ongoing Asean Football Federation (AFF) Under-15 Championship, has been deemed eligible to participate in the tournament.
— The Straits times

Cops nab Myanmar national for suspected murder of fellow countryman in Kedah
A Myanmar man is believed to have been murdered by his countryman at a shop in Taman Bunga Raya, Sungai Petani yesterday.
— Malay Mail