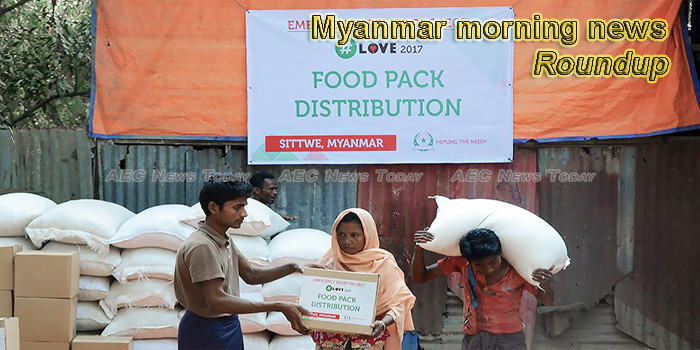 Myanmar army says to punish soldiers in Rohingya atrocities probe
Myanmar’s army will court-martial soldiers after a new finding in an inquiry into atrocities in Rakhine state, from which more than 730,000 Rohingya Muslims fled a 2017 army-led campaign the United Nations says was executed with “genocidal intent”.
— The Daily Star

Villagers killed by artillery in northern Myanmar
Five civilians, including two children, were killed in northeastern Myanmar Saturday when artillery hit a village amid talks between rebel groups and the government to end the conflict.
— AA

Myanmar court sends filmmaker to prison for army remarks
A court in Myanmar has found a prominent filmmaker guilty of defaming the military with his postings on Facebook and sentenced him to a year in prison.
— Lethbridgenewsnow

The Day a Popular Myanmar Newspaper Was Taken Over by the Govt
On this day in 1964, the Revolutionary Council led by military dictator General Ne Win nationalized The Mirror Daily, the most successful private newspaper of the time, marking the beginning of an era of restrictions on press freedom in Myanmar.
— Irrawaddy

Siam GS Battery kicks off $10m Myanmar plant
Siam GS Battery, an affiliate of Siam Motors Group, has started operation of a battery charging plant in Myanmar with an investment of US$10 million, expecting to serve rapid growth of auto sales in that country.
— Bangkok Post

Central Bank deputy chief says businesses should pay loans
Banks have a fiduciary duty to ensure that the financial system remains sound and secure by adhering to regulations.
— Myanmar Times

Military now controls Myanmar’s scientifically important amber mines
An internationally important amber deposit in northern Myanmar has been taken over by the country’s military and is being looted to line the pockets of the generals, a report from a local non-governmental organisation confirms.
— New Scientist

Myanmar Military-Backed Firm Rejects Minister’s Account of Power Meter Bidding Problems
Military-run Myanmar Economics Holding Public Company Limited (MEHPCL) on Friday said that a deputy minister’s comments in Parliament regarding problems with the procurement process for electricity meters over the past three years were unfair and had harmed the company’s reputation.
— Irrawaddy

Kachin pastor sued by army for comments with Trump
A Burmese army officer has filed a lawsuit against a Kachin religious leader for mentioning “the promotion of democracy and federalism” with Donald Trump during a July visit to the White House.
— Asean Economist

The Hottest Hotels in Myanmar right now
The word ‘luxury’ has become tainted with things lavish, gaudy, or even crass. Glitz and glamour and lots of stuff has perhaps taken away from what real luxury should mean: a focus on exceptional service and unique experiences.
— Myanmar Times

Is the NRC exclusion really India’s internal issue?
The news of 1.9 million people being excluded from India’s National Register of Citizens (NRC) in Assam is certainly worrisome.
— The Daily Star

Myanmar’s stock exchange promoted
Government and financial officials in Myanmar have held an event to attract investors to the country’s first stock exchange, which is still immature.
— NHK World

Bangalore man strays into NSCN-K held territory in Myanmar
A man from Banglarore, who allegedly strayed into Sagaing, Myanmar and held captive by the Yung Aung led faction of the NSCN-K, was released to Indian authorities in Mon district.
— Morung Express

Post-Brexit UK to keep Myanmar’s trade preferences
Boris Johnson’s government says Britain will maintain Myanmar’s access to the UK market after Brexit goes ahead, whether or not the EU decides to withdraw trade preferences because of human rights violations.
— Myanmar Times

Myanmar: Internet ban partially lifted in Rakhine
Myanmar’s government on Sunday restored Internet access in five of nine townships in western Myanmar, where fighting between the military and an ethnic rebel group has flared up in recent months.
— AA

Moon set for trips to Thailand, Myanmar, Laos
South Korean President Moon Jae-in will open a busy tour of Thailand, Myanmar and Laos on Sunday, another key diplomatic undertaking in his campaign to broaden and deepen Seoul’s partnerships with the Southeast Asian bloc.
— Eleven Myanmar