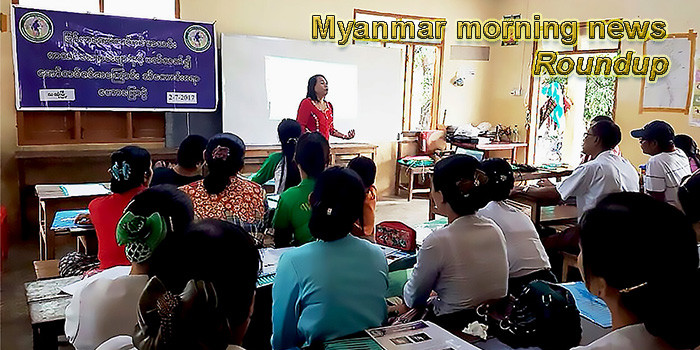 Myanmar To Allow Casino Gambling
Myanmar is close to legalize casino gambling in a bid to boost the local tourism industry and attract foreign investors. Gambling will become legal in the country in May when the nation’s 2018 Gambling Law is set to take effect. Select hotels In Yangon and Mandalay will be able to add casino operations under the new law, Myanmar Times wrote.
— Investvine

Myanmar Stuck Between Beijing’s Demands, Public Opposition as it Weighs Big China Dam Plan
When Myanmar’s Aung San Suu Kyi heads to Beijing at the end of April to attend China’s Belt and Road Forum for International Cooperation, she will be caught between Chinese leaders’ strong desire to complete a controversial dam project and growing public opposition to the dam amid wider suspicion about other Chinese initiatives, Myanmar political analysts said Monday.
— Radio Free Asia

Congestion at Sino-Myanmar and Sino-Laos borders causes fall in banana prices
People in the Chinese banana industry say that the price of bananas will likely increase again since market demand began to grow in the middle of March. More and more visiting traders are traveling to banana production areas in China’s southwest and the increased demand pushes the price up.
— Fresh Plaza

Statement of INGOs in Myanmar on the situation in Rakhine
As international NGOs supporting communities throughout Rakhine State, we express our deep concern with the continued fighting between the Myanmar Security and the Arakan Army Forces.
— NRC

Spending on YCDC election unapproved, questionable: MP
Voting for new members of the Yangon City Development Committee (YCDC) has already taken place, but the budget to carry out the municipal election was not officially approved by regional parliament, according to U Kyaw Zeya, MP for Dagon township No. 2 constituency.
— Myanmar Times

Commentary: Myanmar on the cusp of opening up to mediation on Rakhine crisis
Discussion and debate continues, regionally and internationally, on how ASEAN can work with Myanmar in dealing with the humanitarian and political implications of the 2017 exodus of Rohingya communities from Myanmar’s Rakhine State to Bangladesh after a harsh military response to what Myanmar authorities have highlighted as terror attacks on the country’s sovereign soil.
— Channel NewsAsia

Govt, Tatmadaw, KIA and KNU to hold talks in April
The government and the Tatmadaw (military) will hold talks with the Kachin Independence Organisation (KIO) and Karen National Union (KNU) in April, according to U Zaw Htay, director general of the President’s Office.
— Myanmar Times

Myanmar boy can’t swim but floats on oil drum to Bangladesh
Nabi Hussain owes his life to a yellow plastic oil drum. The 13-year-old Rohingya boy could not swim, and had never even seen the sea before fleeing his village in Myanmar. But he clung to the empty drum and struggled across the water with it for about 2.5 miles, all the way to Bangladesh.
— Lakeland Observer

Myanmar Military, Arakan Army Trade Accusations Over Rakhine Hostilities
The Myanmar military on Sunday cautioned the public not to believe “false and fabricated information and propaganda” spread by the Arakan Army (AA), whose soldiers it accused of disguising themselves as local residents of areas where government forces are fighting the rebel group in western Myanmar’s Rakhine state.
— Radio Free Asia

NLD wins landslide in sparsely attended Yangon election
YANGON — Candidates from the National League for Democracy have won all seats in the Yangon municipal elections except in Seikkan Township, where the three elected township committee seats were taken by independents.
— Frontier Myanmar

Rohingya relocation to island now uncertain
The planned relocation of 100,000 Rohingyas from refugee camps near the Myanmar border to Bhasan Char, an island off the coast of Bangladesh, may not happen, the Bangladesh Chronicle reported on March 27.
— Asia Times

Three killed, four injured by landmine in Shan State
Three people, including a grade school student, were killed and four women were injured after one of them stepped on landmine in Manli village on the Thibaw-Namtu road in Shan State, according to local residents.
— Myanmar Times

Over 2m Myanmar citizens abroad, most are migrant working men
More than 2 million Myanmar citizens are in foreign countries for various reasons and most of them are working people aged between 15 and 39, according to UNFPA.
— Eleven Myanmar

Israeli’s poets work translated to Myanmar
A compilation of poems by the late Israeli poet Yehuda Amichai has been published in Myanmar.
— Myanmar Times

India-Myanmar commodity flow temporarily ceased
As the India had temporarily blocked the traffic flow at their border gates, commodities flow at the Reed border area had come to a halt, according to Reed Township administrator Kyin Lan Kham.
— Eleven Myanmar

YCDC elections marked by poor voter turnout
Despite the country’s president casting his vote in the Yangon City Development Committee (YCDC) elections on Sunday, the polls drew the attention of few city residents, and the polling station where he voted quickly grew quiet again after he and the crowd of journalists accompanying him left.
— Myanmar Times

Myanmar Morning News For May 31