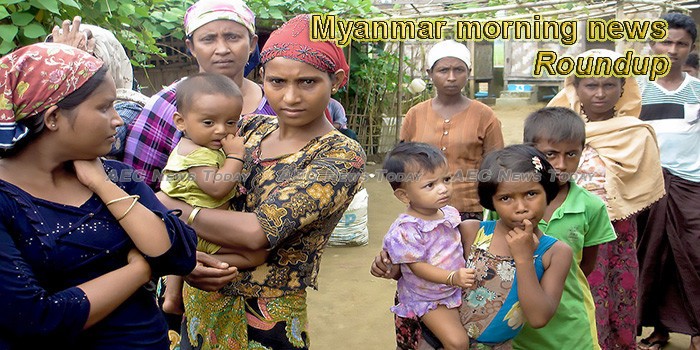 UNESCO prize for Reuters journalists jailed in Myanmar
Reporters Without Borders (RSF) congratulates Burmese journalists Kyaw Soe Oo and Wa Lone on today’s announcement that they are to be awarded UNESCO’s Guillermo Cano Press Freedom Prize and reiterates its call for their immediate release.
— Yubanet

Myanmar and Thailand to utilise blockchain technology
This week, the Myanmar and Thai central banks approved the Krungthai and Shwe remittance project developed by Everex. The endorsement was made official at a meeting in Chiang Rai, Thailand, where financial institutions in the region demonstrated new solutions that enable cross-border payments.
— Mizzima

Myanmar and Bangladesh cooperation to combat illegal drug trade and terrorism
Myanmar and Bangladesh will cooperate in border area security and rule of law, according to a meeting of senior officials of border guard forces of the two countries held in Myanmar’s capital Nay Pyi Taw, Xinhua reported.
— Mizzima

Myanmar to export green tea to Germany
Organic green tea will be exported to Germany in September according by U Hla Baw, president of Pindaya Tea Cluster (PTC).
— Myanmar Times

Manulife expands into Myanmar’s life insurance market
Manulife Asia is expanding its operations in Myanmar, its 13th market in the region, following its selection as a “preferred applicant” by the country’s Ministry of Planning and Finance to set up a wholly foreign-owned life insurance operation.
— The Sun Daily

Erin Murphy on the State of Myanmar’s Economy
A conversation on the future of Myanmar’s economy, and the implications for domestic and international actors.
— The Diplomat

Myanmar Voyages improves its readiness for tourism boom
IN VIEW of the Asian Development Bank’s projection that tourism will become a key driver of Myanmar’s economic growth in the next two years, Myanmar Voyages Co, the leading destination management company (DMC) in the country, is boosting its readiness to cash in on the tourism boom, said the firm’s managing director ThetLwinToh in an exclusive interview in Yangon.
— Eleven Myanmar

New Weekend Market to Open in Yangon Next Month
A new weekend market will be launched in Pansodan in Yangon’s downtown area with the aim of developing a new tourist attraction for the city and supporting Myanmar’s tourism marketing.
— The Irrawaddy

Understanding China’s response to ethnic conflicts in Myanmar
In recent years, China has been playing a proactive and assertive role in neighbouring Myanmar’s internal conflicts, most of them driven by tensions between the Myanmar military and ethnic armed groups.
— Orfonline

Huawei eyes healthy growth in Myanmar amid consumers’ trust
Provided that most of its customers continue to place their trust in Huawei and recogniseits contributions to the industry, Chinese giant Huawei Technologies Co remains confident that it will maintain a strong growth in Myanmar, according to Bob Zhu, deputy general manager of Huawei Myanmar.
— Eleven Myanmar

Myanmar’s meth boom affects Malaysia and surrounding countries, says report
Myanmar is now the biggest producer of methamphetamine in the world, much of which ends up in neighbouring places such as Malaysia, according to an investigative report by Al Jazeera on the trade of the illegal drug in the region.
— FMT

Myanmar’s army is increasingly turning to India for training and weapons
Amid much rejoicing over the Indian air strikes at Balakot in Pakistan-occupied Kashmir — seen as evidence of escalation in India’s counterterrorism response — the Indian army has achieved a major breakthrough in military diplomacy in the East.\
— Telegraph India