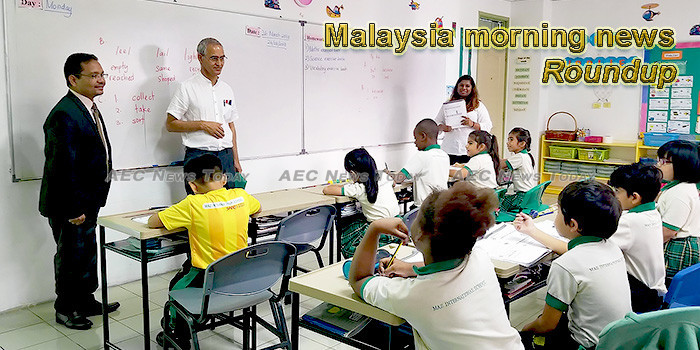 Singapore, Malaysia agree to extend RTS Link deadline by another month: Malaysia’s transport ministry
Singapore and Malaysia have agreed to extend for an additional month, the deadline to decide on whether to continue with construction of the Johor Bahru-Singapore Rapid Transit System (RTS) Link without any additional cost, Malaysia’s Ministry of Transport said in a media statement on Sunday (Sep 29).
— CNA

AirAsia set to implement lower PSC rate for non-ASEAN destinations from Oct 1
Airasia Group Bhd says it is set to implement tomorrow (Oct 1), the new, lowered passenger service charge or PSC for passengers flying out to destinations beyond Asean from all other airports in Malaysia, except the Kuala Lumpur International Airport.
— The Edge Markets

Langkawi set to be main location for 5G testing
Langkawi is set to play a key role in Malaysia’s push towards the fourth industrial revolution, with the popular tourist island to be the main test bed for 5G demonstration projects.
— The Sun Daily

Water supply to affected districts fully restored: Air Selangor
Water supply to 372, 031 consumers in four districts — Petaling, Hulu Langat, Kuala Langat and Sepang, which was disrupted due the Sungai Semenyih water treatment plant having to shut down because of odour pollution of its raw water supply on Saturday, has been fully restored.
— The Sun Daily

Jho Low arranged security deposit payment of RM2.4b to Aabar for misappropriation
The High Court here was told today that fugitive businessman, Low Taek Jho (pix) or Jho Low had arranged for the security deposit payment of US$576,943,490 to Aabar Investments PJS (Aabar) for the takeover of Tanjong Energy Holdings Sdn Bhd (TEHSB) for the purpose of misappropriation.
— The Sun Daily

History made as first Malaysian QC is called to local bar
Steven Suppiah Perian, who is practising in England and Wales, made history today for being the first Malaysian Queen’s Counsel to be admitted to the High Court of Malaya.
— FMT

What Lies Ahead in Australia-Malaysia Security Collaboration?
A recent interaction put the focus on what lies ahead for the defense side of the relationship between the two countries.
— The Diplomat

Malaysia cannot depend on monetary policy to push growth
With more than a week before the tabling of Budget 2020, former Bank Negara Malaysia (BNM) deputy governor Tan Sri Lin See Yan (pix) said that Malaysia needs a fiscal policy to generate growth for its economy.
— The Sun Daily

No Malaysian affected in Philippine earthquake: Wisma Putra
Wisma Putra, the Foreign Ministry, said today there is no report of any Malaysian having been affected by the earthquake in Jose Abad Santos, southern Philippines, yesterday.
— The Sun Daily

Palm oil from conserved rainforest in Indonesia’s Sumatra sold to major brands, says forest group
Palm oil from an illegal plantation inside an Indonesian rainforest home to endangered orangutans has found its way into the supply chains of major consumer brands including Unilever and Nestle, according to a US-based environmental group.
— CNA

1MDB need approval to engage in loan agreement
The High Court here was today told that the 1Malaysia Development Berhad (1MDB) could no longer engage any more loan agreements after May 2009 without Datuk Seri Najib.
— New Sarawak Tribune

Police start probe over ‘200,000 new citizenship’ claim
The owner of fake Facebook and Twitter accounts under the name of ”TengkuRajaAlamShah” has been urged to come forward to facilitate the investigation into the allegations that 200,000 people have been granted new citizenship.
— The Sun Daily

ACE Market-bound Solarvest to raise RM34.6m for expansion plans
Solarvest Holdings Bhd is looking to raise RM34.6 million from its listing on the ACE Market of Bursa Malaysia.
— The Sun Daily

TH says equity investment stays strong at RM7.48b
Lembaga Tabung Haji (TH) says its equity investment has stayed strong with the value of domestic equities increasing by RM1.12 billion to RM7.48 billion as at Sept 27, 2019 from RM6.36 billion at the end of 2018.
— The Sun Daily

Puteri Umno leader summoned by cops after insisting Penang rampage due to religious slurs
A Puteri Umno vice-chief has been called today to give her statement at Bukit Aman after she claimed a Penang man shot dead by police had run amok due to co-workers’ remarks insulting Islam last week.
— Malay Mail

Anti-islamophobia TV channel comes at an important time: Pakistani envoy
A trilateral cooperation between Malaysia, Pakistan and Turkey to set up an English-language television channel to tackle Islamophobia and provide explanations on Islam is an important move during the recent challenging times facing the Ummah (community).
— The Sun Daily