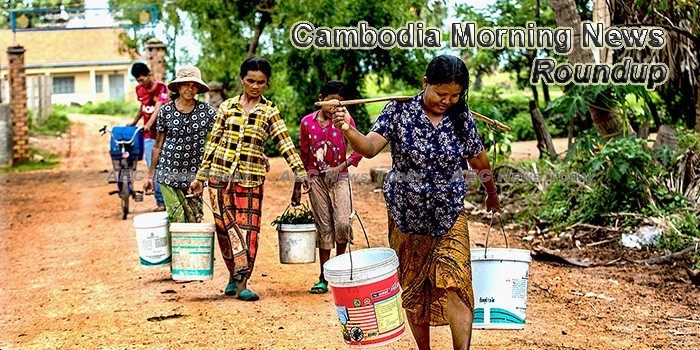 Ex-CNRP officials file politics ban challenge
Senior members of the now-dissolved opposition CNRP have filed a complaint to the Supreme Court asking that it reopen last month’s dissolution case to allow them to submit evidence, even though there is no legal recourse for appeal of a decision by the highest court.
— The Phnom Penh Post

Moving House in Cambodia Not so Easy (video)
When most people say they are moving house they call in a removalist to pack and/ load boxes of personal possessions and household furniture onto a truck for transport to their new abode. In Cambodia, moving house does not necessarily mean the same thing.
— AEC News today (video)

An interview with Mu Sochua
In Jakarta on 8 December, politicians, activists, and scholars dug deeper into the themes covered in New Mandala‘s ongoing series on Southeast Asia’s crisis of democracy at a special forum hosted by the TIFA Foundation.
— New Mandala

Former Cambodian war zone transformed into industrial hub
Once ravaged by war, the city of Poipet on Cambodia’s western border with Thailand is reinventing itself as a manufacturing center, leveraging its cheap labor costs and strategic location in the regional supply chain.
— Nikkei Asian Review

Decision on EU funding for election committee due soon
The European Union ambassador to Cambodia, George Edgar, said on Friday he expected a decision within days on whether funding for Cambodia’s National Election Committee will be cut following the recent dissolution of the country’s only viable opposition party.
— The Phnom Penh Post

EU countries move to limit rice imports from Cambodia
Italy, along with six other European Union countries, has filed a fresh request to European Commission to limit the volume of rice imported from the Kingdom by activating a “safeguard clause” that allows EU member states to impose barriers to protect against trade imbalances.
— The Phnom Penh Post

Government, experts differ on fisheries outlook
Government officials presented a rosier outlook for the Kingdom’s imperiled freshwater fisheries than that espoused by scientists and conservationists at a global workshop on fisheries, food security and nutrition that wrapped up in Siem Reap on Friday.
— The Phnom Penh Post

Prime Minister Hun Sen: 7th of January Brings Back Freedom and Development
To celebrate the International Human Rights Day, Prime Minister Hun Sen posted on his official Facebook account reminding people of the Khmer Rouge Regime, three years, eight months and 20 days from 17 April 1975 to 6 January 1979, the Cambodian people have no freedom, no rights or even foods to eat.
— Fresh News

Business Insider: Finding solutions for farmers
While agricultural development for Cambodian farmers has largely been led by short-term NGO schemes delivering mixed results, Tommy Christensen, chairman and CEO of Green Country Development, believes that if the proper private sector model were implemented, farming in the Kingdom could be more profitable and sustainable.
— The Phnom Penh Post