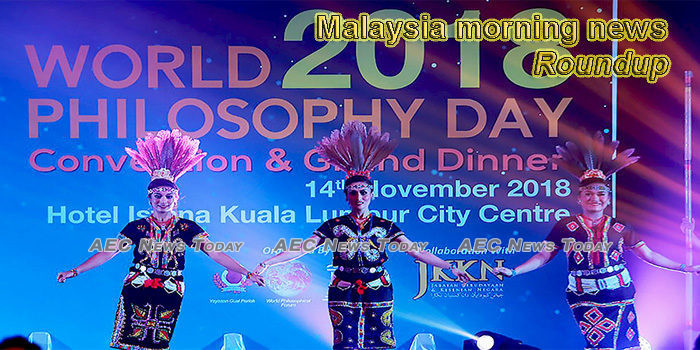 Malaysia’s pledge to embrace automation, e-payments and Industrial Revolution 4.0 tops employment needs in 2020
Steering Malaysia in the direction of progress in the decade ahead is the constant drive towards a cashless society and all the industry sectors and employment skills required to support this.
— Viet Nam News

Deputy minister: 365 foreign travellers denied entry during KLIA system glitch
A total of 365 foreign visitors were issued Not to Land (NTL) notices by the Immigration Department of Malaysia (JIM) during the technical failure and systems disruption at the Kuala Lumpur International Airport (KLIA) last.
— Malay Mail

Selangor Maqis seizes 7,953 kg imported pig products
The Malaysian Quarantine and Inspection Services (Maqis) of Selangor had seized 7,952.51 kg of imported pork products valued at RM412,560 in a check at the entrance of the West Klang Port, near here on Nov 6.
— The Sun Daily

“Chinese winter is the peak sales period for Malaysian durian”
Malaysia received permission to export durians to China more than half a year ago. Their export volume grows every month.
— Fresh Plaza

Malaysia Readies New Deal for Bangladesh’s Fleeced Migrant Workers
Malaysia is edging toward a new deal with Bangladesh to lift a ban imposed on migrant workers from Bangladesh more than a year ago over concerns that recruitment agencies were driving them into forced labor.
— VOA

Malaysia: Caning of four men is a terrible warning to LGBTI people, while more await trial
Four men were caned today after being convicted of ‘attempt of sexual intercourse against the order of nature’, said Amnesty International Malaysia, in signs of an increasing crackdown on LGBTI people in the country.
— Amnesty

Malaysia bans open-loop marine scrubbers
The Marine Department of Malaysia has prohibited the use of open-loop marine exhaust scrubbers, which deposit sulphuric acid in the sea, in its territorial waters.
— Argus media

Minister to take test ride in flying car on Thursday
Entrepreneur Development Minister Redzuan Yusof is to take a test ride in Malaysia’s “flying car” on Thursday, and he invited opposition MPs to witness the test run of the vehicle, also known as the air mobility platform.
— FMT

Malaysia is sliding back, and directionless
I am not saying this because of the result in Tanjung Piai, but because I see this country sliding further back and directionless at the same time.
— Malaysiakini

365 foreign visitors denied entry during KLIA system glitch
A total of 365 foreign visitors were issued Not to Land (NTL) notices by the Immigration Department of Malaysia (JIM) during the technical failure and systems disruption at the Kuala Lumpur International Airport (KLIA) last August.
— The Sun Daily

CM thanked for addressing property, development issues
The Sabah Housing and Real Estate Development Association (Shareda) has expressed its deepest gratitude to the Chief Minister and his Cabinet for addressing some important issues related to the property and development industry through the transformative and improving 2020 State Budget.
— The Borneo Post

Fake reporter charged with causing hurt changes plea
A man, claiming to be a part-time stringer, who previously pleaded guilty to a charge of causing grievous hurt to a female CEO changed his plea to not guilty in the sessions court, here today.
— The Sun Daily

Prosecution to prove Zahid misappropriated RM31m for personal gain
The prosecution in the trial of Datuk Seri Dr Ahmad Zahid Hamidi who is facing 47 criminal charges will prove that the former deputy prime minister had misappropriated RM31 million of Yayasan Akalbudi funds where not a single cent of the money was used for the benefit of the poor.
— The Sun Daily

Perak govt to limit impact of LTSAS runway extension on surrounding area
The Perak Government will ensure that the extension of the Sultan Azlan Shah Airport (LTSAS) runway would have minimal impact on the surrounding housing area.
— The Star Online

Perak to develop retirement corridor to cater for ageing population, state assembly told
The Perak government will develop a retirement corridor that focuses on the well-being of the retirees in view of the growing number of senior citizens in the state besides ensuring the safety and health of its residents.
— Malay Mail

Police have right to check mobile phones – Azis Jamman
Police personnel can inspect mobile phones belonging to individuals to ensure there are no forms of communications that are obscene, offensive, or threatening to the security of the people and nation, the Dewan Rakyat was told today.
— The Borneo Post

Holistic approach more effective in treating mental illness: Experts
The fear of being stigmatised by society is pushing people with mental disorders to seek the services of traditional healers.
— The Sun Daily