Malaysia morning news for May 22 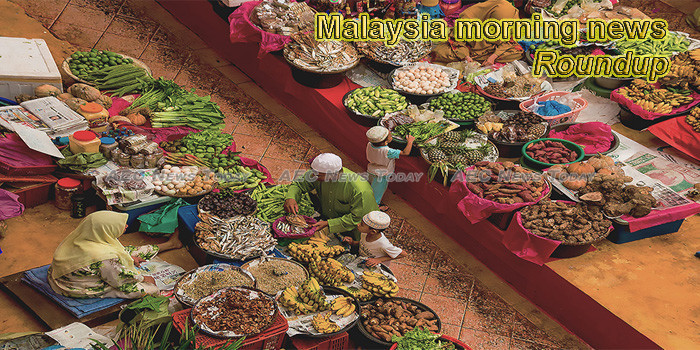 Malaysia, flooded with plastic waste, begins sending scrap back to developed nations
Malaysia, which has become a dumping ground for the world’s plastic waste, has begun sending non-recyclable plastic scrap to the developed countries of origin, its environment minister said.
— ABC

Troubled Singapore start-up honestbee to keep going in Malaysia where business is ‘brisk’
Malaysian users of honestbee, the Singapore-based grocery and food delivery start-up, need not fear losing access of the app for the near future.
— Malay Mail

NT cattle property Carmor Plains sold to Malaysia’s Sarawak Economic Development Corporation for $20m
A Malaysian state-owned corporation has paid $20 million for a cattle property on the floodplains east of Darwin, best known for its hunting and wildlife.
— ABC

PNB Merdeka tower on track for early 2021 completion
The construction of Permodalan Nasional Bhd’s (PNB) Menara Warisan Merdeka is on track for completion by early 2021.The three phases of development includes the iconic Merdeka PNB118, a 630-meter tower, which is set to be the tallest building in Southeast Asia when completed.
— The Sun Daily

Family of Malaysian drug mule due to be hanged on Friday make final appeal to Singapore president
The family P. Pannir Selvam, a Malaysian convict who is facing the hangman’s noose in three days in Singapore, have made a last-ditch appeal to the island nation’s president Halimah Yacob and the Malaysian government to.
— Malay Mail

70 investigation papers prepared on Penang JPJ protection racket, says MACC
MACC deputy chief commissioner says this is why the commission needs more time to wrap up investigations, adding that they hope to charge some suspects around Hari Raya.
— FMT News

New CAP and SAM president to be named soon
The new president of the Consumers Association of Penang (CAP) and its sister organisation, Sahabat Alam Malaysia (SAM) will be announced after the society holds its full council meeting soon.
— The Sun Daily

RM10.5 million in Raya bonus for Sabah civil servants
Chief Minister Shafie Apdal says all ranks of government staff will receive the payment in the next few days.
— FMT News

MALAYSIA MIGHT HAVE BROKEN INTERNATIONAL LAWS BY SENDING BACK A THAI ASYLUM-SEEKER
The last 9th of May marked one year of Malaysians being under a new government, and for many, the date represented the birth of a better Malaysia. A number of media outlets (including us heheh) published a commemorative piece to honor the occasion. Everything is good in Malaysia Baru, but the very next day, something happened that shook quite a few people’s faith in the new government, yet again.
— cilisos

KLCI rises as US eases restrictions on Huawei
The FBM KLCI put on 3.96 points to 1,609.32 following a pick-up in regional momentum as Washington eased trade restriction on China’s Huawei.
— The Star Online

Matriculation programme does not reek of racial sentiment, says UPM vice-chancellor
Universiti Putra Malaysia (UPM) today defended Education Minister Maszlee Malik’s statement on the retention of the 90 per cent Bumiputera quota amid the expansion of matriculation programmes to a 40,000-student intake as.
— Malay Mail

More Malaysians confident about jobs and finances, but careful when spending, survey shows
Malaysia remains the sixth most confident country among 64 nations surveyed in the Consumer Confidence Index (CCI) for the first quarter of 2019, even as concerns over the economy continue to linger.
— Malay Mail

Health Dept acts on QEH leaks
The Sabah Health Department has constructed a concrete barrier to prevent further leakages on Level 4 of Queen Elizabeth Hospital (QEH) which on Thursday caused rainwater to seep down to the operating theatre (OT) and other sections on Level 3.
— The Borneo Post

Datuk Seri held over Malaysia armoured vehicle scandal
PUTRAJAYA – Graft busters have arrested a third individual said to be involved in the supply of equipment in a military vehicle scandal.
— Asia One

Petronas shuts Sabah-Sarawak gas pipeline for maintenance
LNG supply is not impacted as the shortfall is being made up by other fields in offshore Sarawak.
— FMT News

YC-backed dahmakan raises US$5M to roll out its chef-cooked food delivery in Thailand, Malaysia
By vertically integrating the entire value chain from food production to delivery, its mission is to make food delivery affordable for office workers dahmakan, a Y-Combinator-backed cloud kitchen startup in Malaysia, today announced the closing of over US$5 million in Series A round of funding with.
— e27

Two workers seriously injured after falling off telecommunication tower
Two contract workers sustained serious injuries after falling from a telecommunication tower at Kuala Abai road at Kampung Kuala Abai near here yesterday. Both victims, aged 28 and 40 years old, fell from a height of 100 feet while carrying out some work on the tower and were dangling .
— The Borneo Post

Umno Youth: Tebrau chief merely expressing personal opinion on Zahid
Umno Youth has poured cold water on the Tebrau Umno division chief’s suggestion that it is better for Datuk Seri Ahmad Zahid Hamidi to remain on leave as Umno president rather than to return to lead the party.
— Malay Mail

Volcano plans ACE Market listing
Volcano Bhd is looking to list on the ACE Market of Bursa Malaysia.According to its draft prospectus exposure filed with the Securities Commission Malaysia, its initial public offering (IPO) exercise involves a public issue of 125 million new shares and an offer for sale of 175 .
— The Sun Daily

Man held in connection with stabbing of 10-year-old girl in Kajang
Police have detained a man to facilitate investigations into a case where a 10-year-old girl was stabbed at her home in Bandar Sungai Long, Kajang on Saturday. The 40-year-old man was detained near Batu 9, Cheras at 3.30am.
— Malay Mail