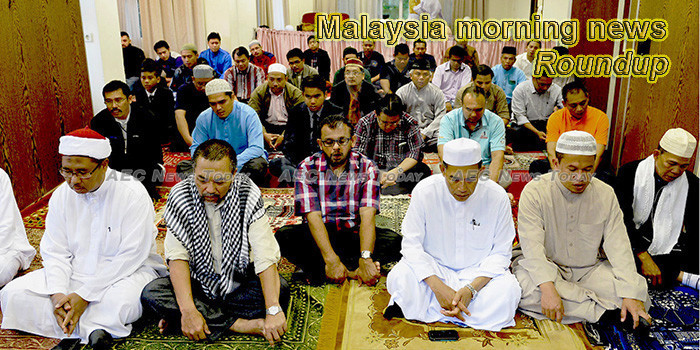 Guan Eng: Investors like transparency-focused Malaysia, a safe haven in trade war
Foreign investors have a positive view of Malaysia that can be considered a safe haven amid the ongoing trade war between economic superpowers US and China, Finance Minister Lim Guan Eng said.
— Malay Mail

Committee to advise housing, local gov’t ministry on needs of disabled: Zuraida
The Housing and Local Government Ministry is to set up a committee within the next six months to feed it input and advice on the provision of disabled-friendly basic facilities in public building and housing scheme projects.
— The Sun Daily

Malaysian durian sales may spike on China’s nod to thorny fruit
Malaysia is all geared to satisfy China’s craving for a pungent, football-sized thorny fruit.
— The Star Online

Govt committed to reducing overall debt and liabilities: Lim
The government is committed to continue reducing the country’s overall debt and liabilities rather than just the direct debt component.In a statement today, Finance Minister Lim Guan Eng said the government’s newly established Debt Management Office was pressing on with its fiscal.
— The Sun Daily

NFC chairman to govt: Why sue when we’ve agreed to repay loan?
The National Feedlot Corporation (NFC) has questioned the suit filed in court against it by the Attorney General, saying that it had last year offered to pay in full the RM250mil loan it took more than 10 years ago.
— The Star Online

Profit-taking stalls KLCI rally ahead of Raya holidays
Investors took some cash off the table on Monday following a bullish week that saw the FBM KLCI put on nearly 50 points.
— The Star Online

Weak global sentiment drags Bursa Malaysia down
Bursa Malaysia opened easier this morning, in tandem with regional peers, with sentiment clouded by the weaker Wall Street performance, as well as growing concerns over the state of global trade.At 9.05am, the key FTSE Bursa Malaysia KLCI (FBM KLCI) eased 3.51 points to 1,647.25 from .
— The Sun Daily

Are your PCs updated against BlueKeep, the next WannaCry malware? cyber security firm asks Malaysians
A cyber security company today said tens of thousands of Malaysian computer users are vulnerable to a new cyber threat called BlueKeep, similar to a malware called WannaCry that invaded in 2017 and took control of private.
— Malay Mail

Smooth traffic flow on major expressways so far this morning
The flow of traffic on all major highways has been reported to be smooth as at 9am today.PLUS Malaysia Berhad spokesperson when contacted said despite the increase in the number of vehicles on the road, traffic flow towards the north and south was still smooth.
— The Sun Daily

Raya exodus: Traffic flow increase but still smooth in major highways as at 10.30pm
Despite the traffic flow on major expressways being reported to increase in volume, it was still smooth and under control as at 10.30pm. PLUS Malaysia Berhad spokesman when contacted said heavy traffic was reported on.
— Malay Mail

Malaysians divided on Maszlee
Things are not going well for Education Minister Maszlee Malik (pix) who has one of the toughest portfolios in the Cabinet.By most accounts, his performance has not been up to par.Petitions calling for his resignation have reportedly garnered substantial support.
— The Sun Daily

Be a registered voter in the area you seek aid from: Lim
Those applying for welfare aid need to ensure they are registered voters in the constituency they are seeking help from.
— New Sarawak Tribune

New, longer route for Malacca River cruise starting November
The Malacca River and Beach Development Corporation will improve the service of Malacca River Cruise (MRC), including by expanding the existing route to make a new and longer one, in a bid to attract more visitors.
— The Sun Daily

DBKL: Only regular Saturday night market allowed on Lorong TAR
Kuala Lumpur City Hall (DBKL) has not authorised any business activity along Lorong Tuanku Abdul Rahman (TAR) during Ramadan, except for the usual night market on Saturdays.
— The Star Online

KLIA’s mishandled baggage team handles 17,000 bags a day
Formerly an air traffic control and communication officer with the RMAF, Hamid was given the task of reducing the average number of mishandled luggage from around 950 pieces a month to just below 150. Last March, his team succeeded in bringing that number down to about 100, which won them an award.
— Star2.com

Malaysia: A pleasant surprise from April trade data
Our view of the USD/MYR exchange rate hovering around the 4.2 level for the rest of the year remains at risk from the havoc that an escalation of the global trade war could wreak on emerging market currencies
— ING

Make sure vehicle in tip-top state before leaving home: Miros
The “balik kampung” rush is well underway now with Hari Raya Aidilfitri just two days away.As the festive season brings with it higher incidences of road accidents, it is imperative that those heading back to their home towns give priority to ensuring their vehicles are in tip-top.
— The Sun Daily

Malaysian does nation proud by leading company of cadets at West Point
Abdul Halim Abdul Rahim has created history and done the country proud by being the first Malaysian to lead a company of 120 cadets at the prestigious United States Military Academy at West Point, New York.
— The Sun Daily

TNB assures of fast resolve on bill hikes
Tenaga Nasional Berhad (TNB) has assured consumers that it is doing its best to resolve issues related to the recent sharp spike in billing among some of its customers.”All efforts are focused towards attending to our customers’ concerns based on their reports lodged or complaints.
— The Sun Daily

Committee to advise Housing, Local Govt Ministry on needs of disabled – Zuraida
The Housing and Local Government Ministry is to set up a committee within the next six months to feed it input and advice on the provision of disabled-friendly basic facilities in public building and housing scheme projects.
— The Borneo Post

Zuraida says Adib inquest still on schedule, will pick lawyer after AGC offers names
Zuraida Kamaruddin today said she has the final decision on selecting a suitable lawyer to represent the Housing and Local Government Ministry as well as the Fire and Rescue Department for the inquest of firefighter Muhammad.
— Malay Mail

Serial number from pocket money given by wife lands man Sports Toto Jackpot
A 79-year-old retiree who won the Sports Toto 4D Jackpot 1, on May 25, said the idea behind placing bets on the winning numbers ‘1484 and 1311’ came from two RM50 banknotes given to him by his wife.
— The Sun Daily

Qatar rejects Mecca talks outcome
Qatar’s foreign minister says that Doha rejected the outcome of the recent Mecca talks on mounting regional tensions with Iran as it had not been properly consulted.
— FMT News

Spread the word about dolphins in Santubong — STB
There are indeed dolphins in the Santubong rivermouth and the sea off Damai Beach near here. Sarawak Tourism Board (STB) marketing manager Catherine Huang discloses that except among those in the local tourism sector, not many Kuchingites know about this.
— The Borneo Post

Malaysian Bar says AGC has right to ask for removal of Ministry’s lawyer from Adib’s inquest
The Malaysian Bar says the Attorney-General’s Chambers has all the rights to ask the Housing and Local Government Ministry to remove its legal counsel from the inquest into the death of firefighter Muhammad Adib Mohd Kassim.
— The Sun Daily