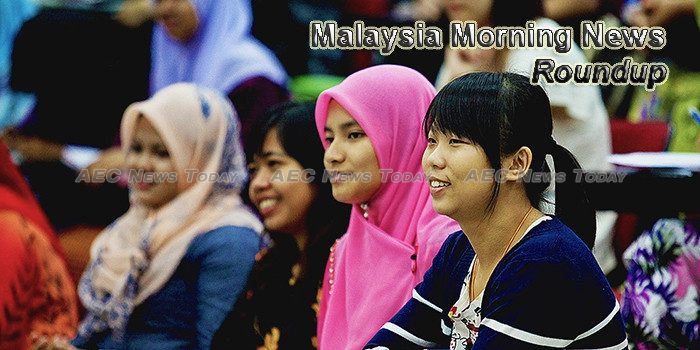 Suspend Some of Pacific Trade Pact to Save It, Malaysia Says
A blockbuster Pacific trade pact thrown into doubt by Donald Trump could be salvaged by suspending parts of the deal in order to get the 11 remaining nations to sign on, according to Malaysian Trade Minister Mustapa Mohamed.
— Bloomberg Polictics (video)

Malaysia, Thailand are riskiest Asian emerging markets — National Australia Bank
Thailand and Malaysia are the riskiest emerging markets in Asia, as the Fed continues to raise interest rates, while the Philippines, followed by India, are National Australia Bank’s favorite markets, Julian Wee, senior markets strategist at the lender in Singapore, says in interview.
— The Edge Markets

Foreign firms in Penang still collating flood impact info
Foreign companies operating in Penang faced considerable disruption, especially in manpower, during the floods which hit the state over the weekend.
— The Sun Daily

Expect bleak job market next year
If you are graduating next year and have no job experience, be prepared for a tough time looking for a job, at least one that pays well. The job market in 2018 is expected to be bleak.
— Free Malaysia Today

WIEF a platform to elevate Islamic finance sector
The upcoming 13th World Islamic Economic Forum (13th WIEF) will provide vast opportunities for the private sector as well government decision makers within Sarawak and Malaysia as it serves as an educational and business platform for both sectors.
— The Borneo Post

MyCEB announces key appointments for business events division
Malaysia Convention & Exhibition Bureau (MyCEB) has announced the appointment of Premala Danapakiam as senior manager of business events and the promotion of Tuty Elyanie Medali to the position of assistant manager of event support.
— The Borneo Post

MALAYSIA | DEFENSE SEEKS TO SHOW POLITICAL LINK IN KIM JONG NAM KILLING
Defense lawyers in the trial of two women accused of killing the estranged half brother of North Korean leader Kim Jong Un sought yesterday to establish there was a political motive in the brazen airport assassination, with many key suspects linked to the secretive state.
— Macau Daily Times