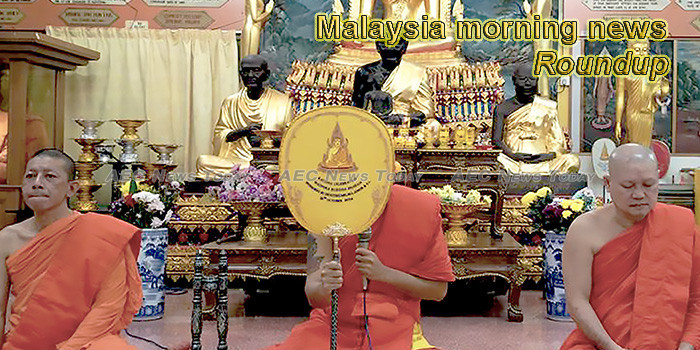 Malaysia to file WTO complaint against EU’s palm biofuel policy by Nov
Malaysia will submit a complaint to the World Trade Organisation (WTO) by November to challenge the European Union’s restrictions on palm biofuel, according to Primary Industries Minister Teresa Kok Suh Sim.She said documents related to the complaint are currently with the Attorney-General’s Chambers (AGC).
— The Sun Daily

FPDSB meets its establishment objectives: Audit report
Based on the audit of the corporate governance, financial position and principal activities, the objectives of the establishment Forest Plantation Development Sdn Bhd (FPDSB), a wholly-owned subsidiary of the Malaysian Timber Industry Board under the Ministry of Primary Industry (MPI), have been met, said the Department of National Audit.
— The Sun Daily

Malaysia welcomes its first durian-friendly hotel
Durians are known for their distinct, pungent smell, which many foreigners describe as a combination of rotten onions and old socks. As such, most hotels in Asia forbid the fruit on their premises.
— Arab news

Asset declaration proof of government’s anti-corruption effort
The move by the current government to make it compulsory for all parliamentarians to declare their assets shows the government’s commitment to fighting corruption and increasing integrity in corporate governance.
— New Sarawak Tribune

Minister: At RM29.3b, FDI inflow into Malaysia increases by 73.6 per cent
Minister of International Trade and Industry, Datuk Darell Leiking today said that Malaysia had approved RM29.3 billion in Foreign Direct Investment (FDI) in the first quarter of 2019 alone, which is an increase of 73.6 per.
— Malay Mail

No money lost from GST refunds – PAC
The Public Accounts Committee (PAC) investigation over the “missing” RM19.4 billion Goods and Services Tax (GST) refunds has found that there was no money lost in the GST revenue collection.
— The Borneo Post

2018 AG’s report: RM18.91mil distributed to 49 NGOS, even though criteria not fulfilled
A total of RM18.91mil has been distributed to 49 non-governmental organisations (NGO), even though the organisations did not fulfil the necessary criteria set by the Unit for Socio-Economic Development of the Indian Community (Sedic), the 2018 Auditor-General’s Report states.
— The Star Online

Proposal to decriminalise drug addiction still being discussed: Azis
The proposal to decriminalise drug addiction, and possession of drugs in small quantity for personal use, is still at the Home Ministry’s discussion level and will be decided soon.Deputy Home minister Datuk Mohd Azis Jamman (pix) told Dewan Rakyat the proposal, which was first brought to the government’s attention in 2017, is still being .
— The Sun Daily

Omesti disposes of subsidiary to CTOS for RM26.88m
Omesti Bhd is selling its entire 100% stake in Formis E Solutions Sdn Bhd for RM26.88 million to CTOS Holdings Sdn Bhd. Omesti said in a filing with the stock exchange that its wholly owned subsidiary Man Yau Holdings Bhd had on July 12 entered into a share purchase agreement (SPA) with CTOS for the disposal.
— The Sun Daily

SESB identifies over 200MW of hydropower potential for devt
Sabah Electricity Sdn Bhd (SESB) is conducting several hydrological studies to further enhance and develop future potential hydro power in Sabah. Based on the study and aligning with generation planning requirements, the utility company has identified hydropower sites in Sabah with potential of 200MW to be developed in the next 10 years.
— The Borneo Post

Gobind: Ministry fosters spirit of patriotism through RTM
The Communications and Multimedia Ministry continues to foster, through the Department of Broadcasting (RTM) and Malaysian National News Agency (Bernama), the spirit of patriotism in the people of all ages, the Dewan Rakyat.
— Malay Mail

NO money lost from GST refunds
The Public Accounts Committee (PAC) investigation over the “missing” RM19.4 billion Goods and Services Tax (GST) refunds has found that there was no money lost in the GST.
— New Sarawak Tribune

PTPTN people’s consultative paper to be tabled to cabinet this August
A People’s Consultative Paper (KKR) will be tabled to the Cabinet on a new mechanism for repayment of National High Education Fund Corporation (PTPTN) loans, the Dewan Rakyat.
— New Sarawak Tribune

Tourist guide’s body arrives at Miri Hospital for postmortem (Video)
The helicopter carrying the body of 20-year-old guide Roviezal Robin, who was found inside Deer Cave in Mulu National Park, touched down at Miri Hospital at 3.13pm today.
— The Borneo Post

After PAC finds GST funds diverted, Najib insists had right to do so
Former prime minister Datuk Seri Najib Razak conceded today that money meant for tax refunds should have been put into a trust account but insisted he had the power to divert these elsewhere. Amid growing calls for him to.
— Malay Mail

Chinese support for Najib was already on the wane before GE14: Nazri
The support of the Chinese community for Datuk Seri Najib Abdul Razak and Barisan Nasional (BN) component party MCA dwindled long before the 14th General Election (GE14).
— The Sun Daily

Mixed marriages give rise to Sarawak hybrid population: CM
The cordial relationship among the people of various communities in Sarawak has given rise to inter-racial and inter-ethnic marriages and created a generation of hybrid population, said Chief Minister Datuk Patinggi Abang Johari Tun Openg.
— The Sun Daily

KJ wants police to follow up on GST robbery claim
The police must initiate follow up actions after the Public Accounts Committee (PAC) absolved the Barisan Nasional (BN) government from accusations of stealing money meant for Goods and Services Tax (GST) refund.
— The Sun Daily

New technologies crucial for oil palm sector: Sultan Nazrin
The application of new technological advances and other innovations associated with the Fourth Industrial Revolution, which offer a tremendous potential to boost productivity, is significantly lagging in the oil palm sector.
— The Sun Daily

‘Asset declaration a powerful tool to prevent corruption’
Compelling all Members of Parliament (MPs) to declare their assets is a huge step forward in the government’s efforts to uphold the principles of integrity and transparency, analysts said.
— The Sun Daily

Pakatan Harapan open to idea of PAS joining coalition – Mukhriz
Pakatan Harapan (PH) is open to the idea of PAS joining the coalition for the unification of Muslims in the country, said Parti Pribumi Bersatu Malaysia (Bersatu) deputy president Datuk Seri Mukhriz Tun Dr Mahathir. He said any effort to unite the ummah was a good move, though it was hoped that PAS […]
— The Borneo Post

Audit report: MaGIC is financially sound
Malaysian Global Innovation & Creativity Centre Bhd (MaGIC) is financially stable with the company recording a pre-tax surplus for three years in a row, according to the Auditor General’s Report 2018 Series 1 on the.
— Malay Mail

Over 46,000 students registered under 1P1P
A total of 46,072 students had registered under the business initiative, One Student One Business (1P1P) scheme, for free up to May 31, this year. Domestic Trade and.
— New Sarawak Tribune

New policy on fisheries being drawn up
The Agriculture and Agro-based Industry Ministry will draw up a new policy on the fisheries sector to curb the misuse of deep-sea fishing vessels in this country.
— New Sarawak Tribune

Opposition refers Guan Eng to rights committee after PAC concludes that BN did not ‘rob’ GST refunds
The Opposition has in Parliament today sought to refer Finance Minister Lim Guan Eng to the Rights and Privileges Committee over his claim that the Barisan Nasional government had allegedly stolen RM19 billion in tax refunds.
— The Borneo Post

Robots will replace 1 in 5 jobs in 5 years: survey
One of five jobs will be replaced by artificial intelligence (AI) and automation within five years as organisations worldwide focus on utilising these technologies to improve efficiencies in their businesses, according to a survey.
— The Sun Daily

SC: Wider credit spectrum needed
There is a need for widening the credit spectrum in terms of accessibility of the capital market.Securities Commission Malaysia chairman Datuk Syed Zaid Albar said while the bond and sukuk market is deep, the credit profile is relatively narrow, with RM384 billion in papers rated as investment grade as at June 2019.
— The Sun Daily

New SLS president pledges to complete unfinished business
The Sabah Law Society (SLS) held its second annual general meeting on Saturday with a record turnout of 329 members, around half the number of practising lawyers in Sabah.
— The Borneo Post

AG report: PAC to question several agencies on discrepancies
Several government agencies will be called up by the Public Accounts Committee (PAC) to explain themselves, following the tabling of the Auditor General’s Report 2018, which found several cases of discrepancies.
— The Star Online

Meet the 3 startups graduating from Vietnam-based VIISA Accelerator’s fifth batch
The startups have received a seed funding, and stand to get a follow-on funding of up to US$200K when they secure a new round from other investors Vietnam-based VIISA Accelerator has announced the graduation of three startups graduating from the fifth batch of its 4-month accelerator programme with the Investment Day.
— e27

Money not from 1MDB won’t be forfeited
Minister in the Prime Minister’s Department (Law) Datuk Liew Vui Keong believed that the Malaysian Anti-Corruption Commission (MACC) would not take further action on the funds of entities, including political parties, as long as they could justify the source of their money was not linked to 1Malaysia Development Berhad (1MDB).
— The Borneo Post