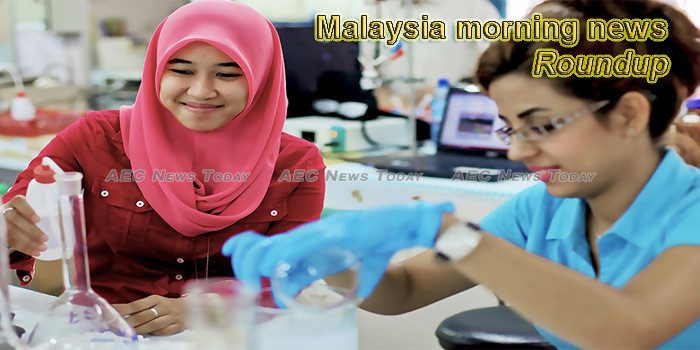 Malaysia seeks to implement B20 for transport sector in 2020
Malaysia targets to raise its biofuel mandate in the transport sector to B20 by 2020, from B10 currently, and for industrial sector to B10, from B7, according to Primary Industries minister Teresa Kok.
— The Star Online

RHB expects Malaysian economy to grow at 4.6pc this year
Malaysia’s economy is expected to sustain at a slow pace of 4.6 per cent this year, same as projected for 2018, as the global environment turned more challenging amidst lingering trade protectionism and rising global interest rates.
— Malay Mail

Malaysia GDP growth to hit 4.7% in Q4
The construction sector will receive a boost as the government’s resumes infrastructure spending.
— SBR

Medical aid group MSF supports Malaysia’s compulsory licensing stance
Malaysia has been facing continuous pressure from pharmaceutical companies and their political allies ever since it used compulsory licensing (CL) to gain access to generic versions of a Hepatitis C drug in 2017.
— The Star Online

Putrajaya insists ship collision happened in Malaysian waters
Putrajaya has again denied repeated claims by Singapore that Malaysian vessel Polaris, which was involved in a collision off the Johor Bahru Port, was anchored in Singapore territorial waters, as the months-old maritime tension between the two neighbours continues.
— FMT

Malaysia and Indonesia rush to slice up $3tn global halal market
apan may have a minuscule Muslim population, but the country still represents the way forward for Malaysia’s Faisal Ahmad Fadzil and his line of halal-certified bath products and massage oils.
— Nikkei Asian Review

Mother of dead maid treated ‘like a dog’ in Malaysia calls for justice
A year after the death of an Indonesian maid who was forced to sleep outside next to a dog, her mother has called for justice as several other cases of abuse languish in Malaysia’s courts.
— Channel NewsAsia

Malaysia Breaks Up Forgery Syndicate Targeting Vietnamese Fishermen
The Malaysian Maritime Enforcement Agency (MMEA) has broken up a syndicate led by a Vietnamese woman that specialized in forging records of foreign fishermen, enabling them to work and cross borders illegally, an official said Tuesday.
— Benar news

Data privacy laws: Malaysia has a long way to go
THE promise of the Internet — as an accelerator of education, knowledge and growth — is being deliberately exploited by certain quarters through the inappropriate use of data.
— New Straits Times

Malaysian-Canadian real estate group ordered to pay over RM600,000 to NGO
A Swiss court has ordered a Malaysian-Canadian entrepreneur and her husband to pay RM672,565 in damages to a Basel-based NGO after it failed to obtain an injunction against the environmentalist group over money laundering allegations.
— FMT

‘Competent’ oil worker crushed by machine on ship off Malaysia
A “highly conscientious and competent” oil and gas worker died from injuries he sustained when he was crushed by machinery on a ship, an inquest heard.
— BBC

Short selling of E&O suspended after breaching price limit
The short selling of property company Eastern & Oriental was suspended in late Tuesday morning session after its share price fell more than 15 sen or 15%.
— The Star Online

Seeking recognition through dubious means
I wonder why the sudden brouhaha about run-of-the-mill degrees. It started with political activist Muhsin Abdul Latheef lodging a police report over a Facebook user’s claim in a Feb 3 post that the University of Cambridge did not offer the distance-learning programme in business administration that Deputy Foreign Minister Marzuki Yahya claims to have pursued.
— FMT

Malaysia makes record seizure of endangered pangolins
Malaysian authorities have busted a pangolin trafficking ring in the Borneo state of Sabah, recording the country’s biggest-ever haul of pangolin and pangolin products, according to conservationists and police.
— Aljazeera

Don’t oppose citizenship for stateless kids, government urged
A civil rights group has urged the government to drop the lawsuit against the grant of citizenship to three stateless children.
— FMT

Report: Cambodia to review case of 47 Malaysian held in prison
The Cambodian Justice Ministry will look into the case of 47 Malaysians detained in Banteay Meanchey provisional prison over suspicions of fraud and running an illegal gambling operation in Poipet city, it was reported today.
— Malay Mail

Malaysia Morning News For May 9